England's hastily assembled side completed a record run chase in an ODI at Edgbaston to beat Pakistan by three wickets on Tuesday.

England completed a clean sweep of their ODI series with Pakistan as Ben Stokes' team mounted a record run chase at Edgbaston.

Set a target of 332 to win, England went into their innings knowing they would have to beat the previous record chase in an ODI in Birmingham by over 50 runs in order to seal a 3-0 series triumph.

Babar Azam's superb 158 had guided Pakistan into a commanding position, but James Vince's maiden ODI century and an impressive 77 from Lewis Gregory inspired the England side in front of a typically vociferous crowd.

And, on the eve of the two-year anniversary of England's World Cup triumph, Brydon Carse – who earlier took a five-wicket haul on his third ODI appearance – delivered the final blow to secure a three-wicket win for Stokes' second-string team.

The skipper combined for a 92-run stand with Imam-ul-Haq (56) – bowled out by a magnificent Matt Parkinson delivery – before then mounting a third-wicket partnership worth 179 with Mohammad Rizwan, who plundered 74 off 58 balls.

Carse finally ended Babar's stand in the final over, with the paceman completing his haul two balls later by dismissing Shaheen Afridi for a duck.

Phil Salt followed his 60 at Lord's in emphatic fashion, hitting 16 runs off the first over to give England a fantastic start, though fellow opener Dawid Malan lasted just two deliveries.

Salt's snappy innings came to an end with England at 53-2, but that brought Vince to the crease.

Zak Crawley (39) and Stokes (32) offered support, but their dismissals were followed by England slumping to 165-5, meaning Vince had to provide some impetus.

With Gregory, Vince – who hit 11 boundaries – helped to put on a partnership of 129; by the time he clipped a Haris Rauf ball to mid-off to be out for 102, England needed 38 to win.

Gregory followed Vince to the pavilion soon after, but Craig Overton (18 not out) paved the way for Carse to cap a fine day with a boundary down the ground. 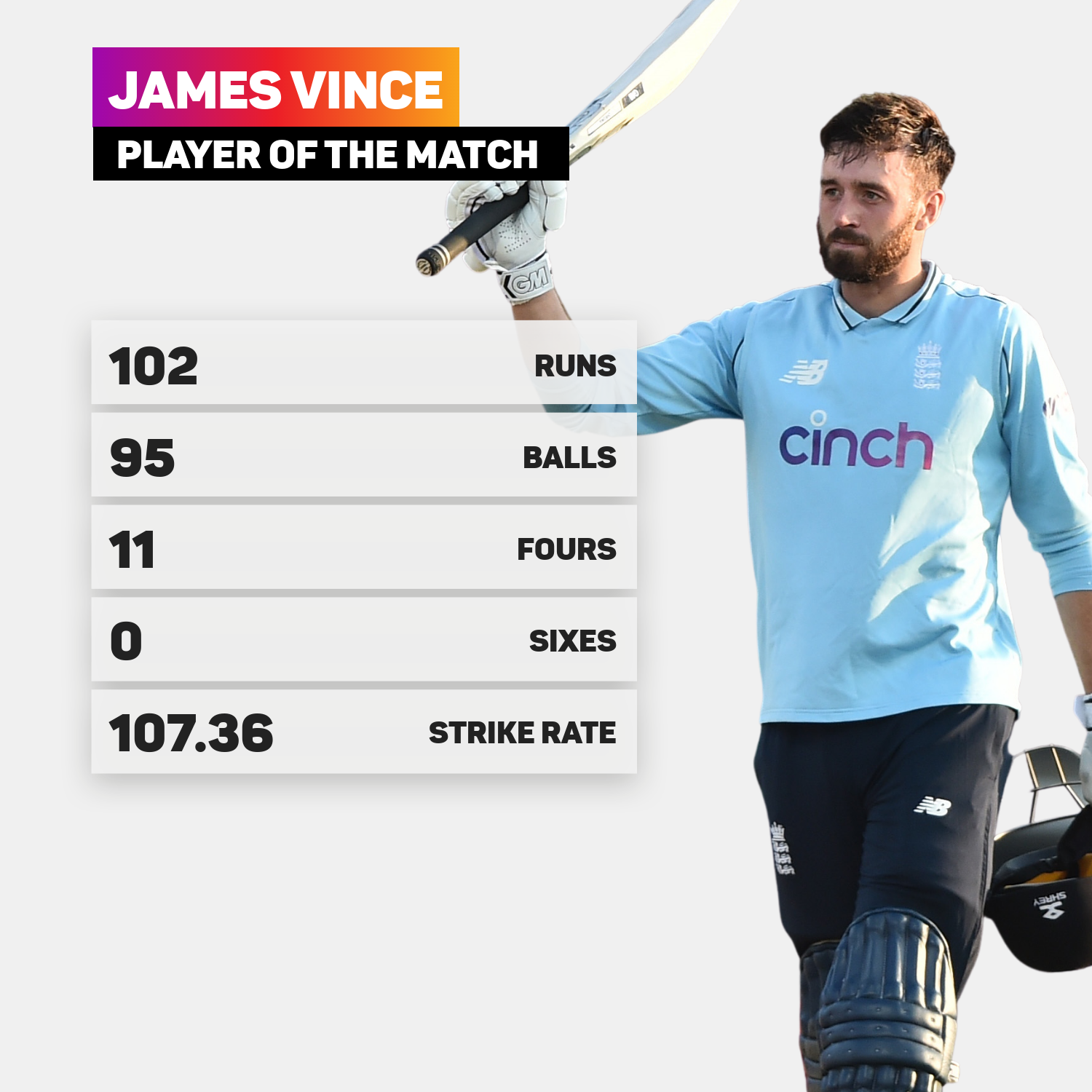 For so long a nearly man of England's international set-up, Hampshire's Vince has taken his chance in this series.

He scored 56 at Lord's and finally got over the hurdle of a first international limited-overs hundred, to surely put himself right in the selectors' thoughts for England's next ODI series.

An ODI career-best from Babar should have been enough to propel his team to victory, yet Pakistan let themselves down in the field.

Three huge chances went down, and their sloppiness was perhaps summed up best by Gregory's dismissal – Shadab Khan left arguing, albeit jovially, with his captain after having to take a catch which really should have been the wicketkeeper's.

The sides meet in a three-match Twenty20 series next, starting on Friday, and Pakistan must improve if they are to restore some pride.