​Mathieu van der Poel is still the general classification leader, as he kept himself in a breakaway, with stage seven won by Matej Mohoric.

Matej Mohoric triumphed in a gruelling stage seven of the Tour de France on Friday, as Primoz Roglic dropped more time in the battle for the yellow jersey.

The 249-kilometre route from Vierzon to Le Creusot, the longest stage of the race, featured five challenging climbs in the final 100km stretch, and saw the general classification contenders start to separate themselves from the chasing pack.

Mathieu van der Poel stayed in yellow as he increased his overall lead to 30 seconds, with the Alpecin-Fenix rider managing to keep pace with a 30-man breakaway.

Having gone clear alongside Brent Van Moer (Lotto Soudal) and Jesper Stuyven (Trek-Segafredo), Mohoric – of Bahrain Victorious – stole a march 19km from the finish line when he powered away on the Signal d'Uchon.

While Mohoric raced clear on the final climb to claim a third stage win in a Grand Tour, following successes at the Vuelta a Espana in 2017 and Giro d'Italia in 2019, there was drama in the peloton as Richard Carapaz picked his moment to try and claw back time on Tadej Pogacar, who won Wednesday's time trial but here slipped from second to fifth in the GC standings.

Meanwhile, Roglic, the 2020 runner-up who was involved in a huge crash on stage three this year, lost further ground as he was dropped by the peloton altogether.

Ultimately Carapaz's efforts proved fruitless as he was swallowed up by the peloton just before the line, while, like Roglic, four-time champion Chris Froome also struggled in the heat.

It was Mohoric's day, and the Slovenian was in tears as he celebrated the most prestigious stage win of his career.

"I didn't think I could make it into the last climb. I was just riding for the jersey and said why not? Kilometre by kilometre I was still feeling OK. I couldn't believe it," said Mohoric, who also takes the polka dot jersey.

Meanwhile, Mark Cavendish, who won stages four and six, kept hold of the green jersey thanks to winning the intermediate sprint. 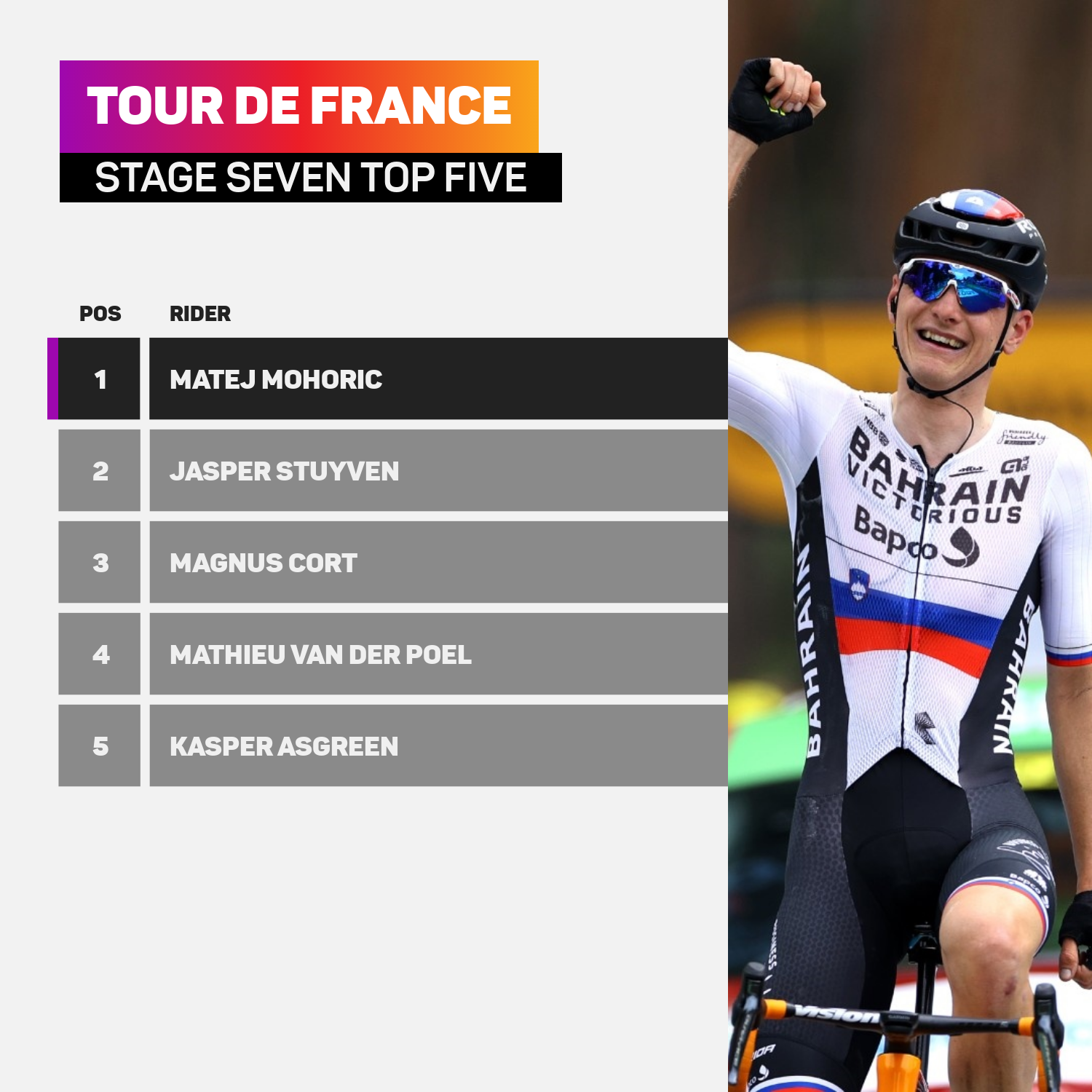 After taking on the Tour's longest stage, the riders do not have life any easier on Saturday, as they head into the mountains for a 150km stage from Oyonnax to Le Grand-Bornand.

Richard Carapaz became only the second athlete from Ecuador to win a gold medal, while four from China were on the podium on day one.

Tokyo Olympics: Dumoulin back and ready for action

Tom Dumoulin is looking forward to competing in both the time trial and road race as he eyes gold at the Games in Tokyo.