The 22-year-old Slovenian had led the general classification from stage eight, and 15 days down the road in Paris he wrapped up a supremely impressive performance.

As well as the top prize, Pogacar also collected the king of the mountain and young rider honours, and it is hard to imagine there not being abundant further success to come over the next decade.

Pogacar spoke on the podium after his win, saying: "Last year I should have written a speech for my first Tour de France victory but I didn't know how to write it.

"So also this year I said, 'OK, I'm going to speak from the heart and say what I have to say'.

"Thank you everybody that came here to support us cyclists through all the three weeks. To the French public and all fans of cycling from the whole world, it is so fantastic racing on the amazing parcours of the Tour this year."

He thanked his team, UAE Team Emirates, for helping him achieve the goals they set out to reach.

"I cannot describe how happy I am to be part of this family, it melts my heart," Pogacar said.

"They were with me every day of the whole year preparing for the Tour. I'm super happy and proud to be part of this team on this journey.

"I'm not going to cry. Thank you everybody. It was a difficult year with COVID and I really hope next year we come here without the masks.

"Of course I cannot forget my family, standing beside me, and my girlfriend and my friends. I hope I've told enough but I'm super happy. Thank you everybody."

Pogacar said it was "time for celebration".

"I will remain motivated in the coming years, but what come next will come next… I’m not stressed about it," Pogacar said, quoted on the Tour's official website. 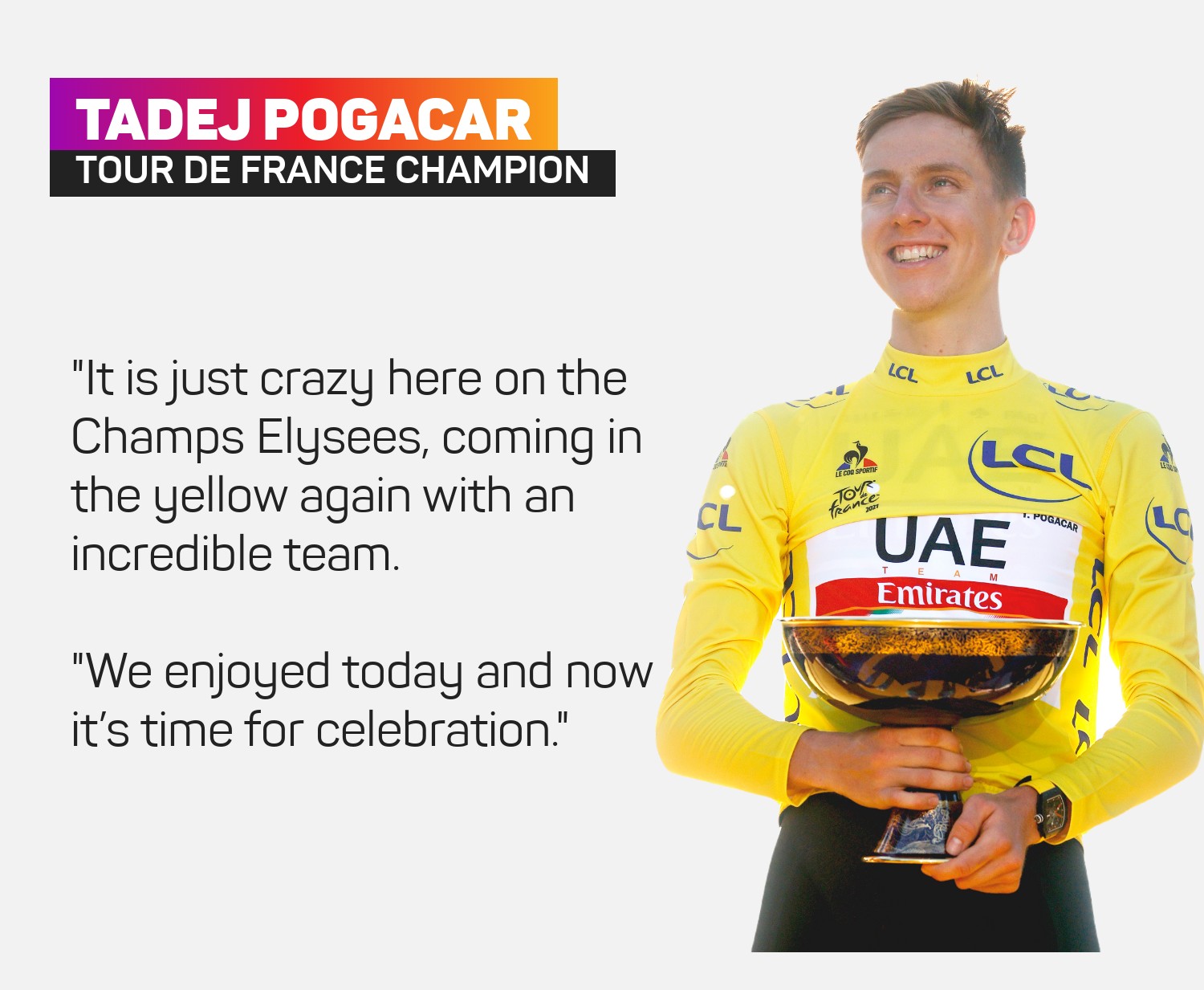 Tour great Eddy Merckx won the general classification five times from 1969 to 1974, and had such a ruthlessness he was nicknamed 'The Cannibal'.

Pogacar does not want to be compared to legends of the sport, insisting he should be allowed to plot his own career path.

"The new Cannibal? I don't like to compare myself to other riders," he said. "Each rider has his own style and personality. Every rider is unique. I don't think there is anything left. I just enjoy life, I work hard, I love cycling – and those are the most important things."

Pogacar did not quite secure a sweep of the Tour honours, with the green jersey – the points classification that rewards the best sprinters – going to 36-year-old Deceuninck-QuickStep star Mark Cavendish.

Cavendish's four stage victories took him level with the record of 34 that Merckx had owned exclusively for over 40 years.

"Ten years later, again with the green jersey, it's fantastic, it feels like getting younger," Cavendish said. "I'm back. It's a dream."

Richard Carapaz became only the second athlete from Ecuador to win a gold medal, while four from China were on the podium on day one.

Tokyo Olympics: Dumoulin back and ready for action

Tom Dumoulin is looking forward to competing in both the time trial and road race as he eyes gold at the Games in Tokyo.