Tadej Pogacar usurped Primoz Roglic in 2020 and then dominated in 2021. Now the Slovenian is out for a third Tour de France win this year.

"I'm just a kid from Slovenia, watching television all day and then riding afterwards," said Tadej Pogacar, after winning the 2020 Tour de France.

Then just 21, he required a 57-second swing to overtake his compatriot Primoz Roglic on the final time trial.

He went on to win the grandest of the Grand Tours by 59 seconds, writing his name forever into cycling history as he won Le Tour on his debut.

There was less drama in 2021, as Pogacar easily retained the three jerseys he won in 2020 (the yellow for the general classification, polka dot for the mountains and white for the best young rider).

While Olympic glory went to Roglic, Pogacar is out to match the great Eddy Merckx in the record books as he returns to Grand Tour action after skipping the Giro d'Italia.

The race starts in Copenhagen on Friday, with the opening three stages winding their way through Denmark – the 10th nation other than France to host the Grand Depart.

Can anyone hope to stop Pogacar in the 109th edition of Le Tour, or is there just no matching the kid from Slovenia? 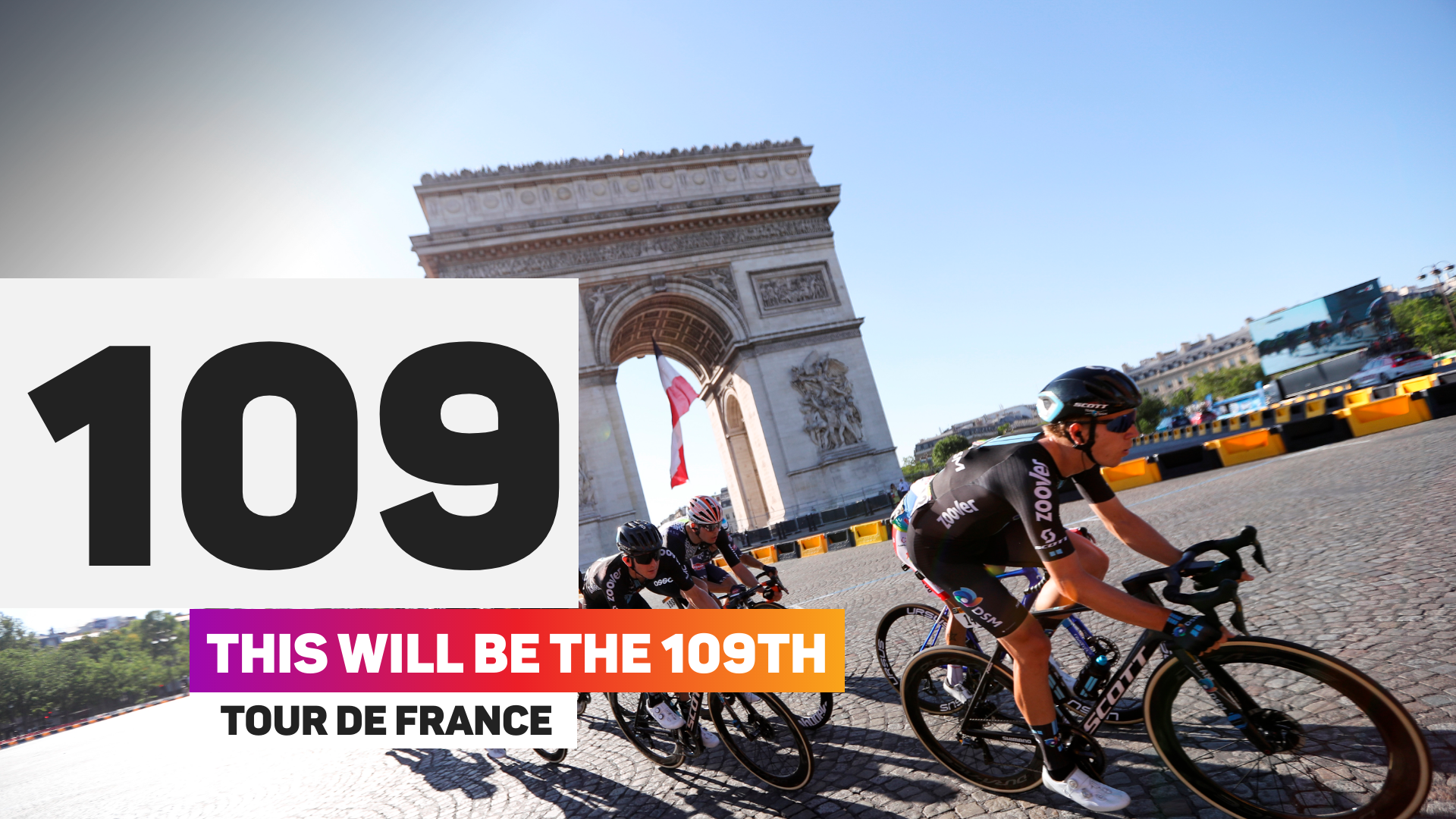 Pogacar has Merckx in his sights

Only Merckx has managed to win the Tour de France on each of his first three appearances in the race (the Belgian went on to win his first five in a row, remarkably), but a place in history is there for the taking for Pogacar.

He is already the youngest rider to win multiple yellow jerseys, at the age of 22 years and 301 days at the culmination of the 2021 Tour, while he has led the young rider classification for the last 30 stages in total, since stage 13 in 2020, which is the longest run since the white jersey was first awarded in 1975.

Pogacar is also aiming to become the first rider to win the king of the mountains jersey in three successive editions of the Tour de France since popular French rider Richard Virenque between 1994 and 1997.

"The Tour de France is the jewel in the crown. It's the one that the road cyclists do all want to win," Chris Hoy, one of the United Kingdom's greatest Olympians, told Stats Perform.

"As such, it's quite hard to predict. But Pogacar is one of these young phenomenal athletes who have shown such maturity, despite their years." 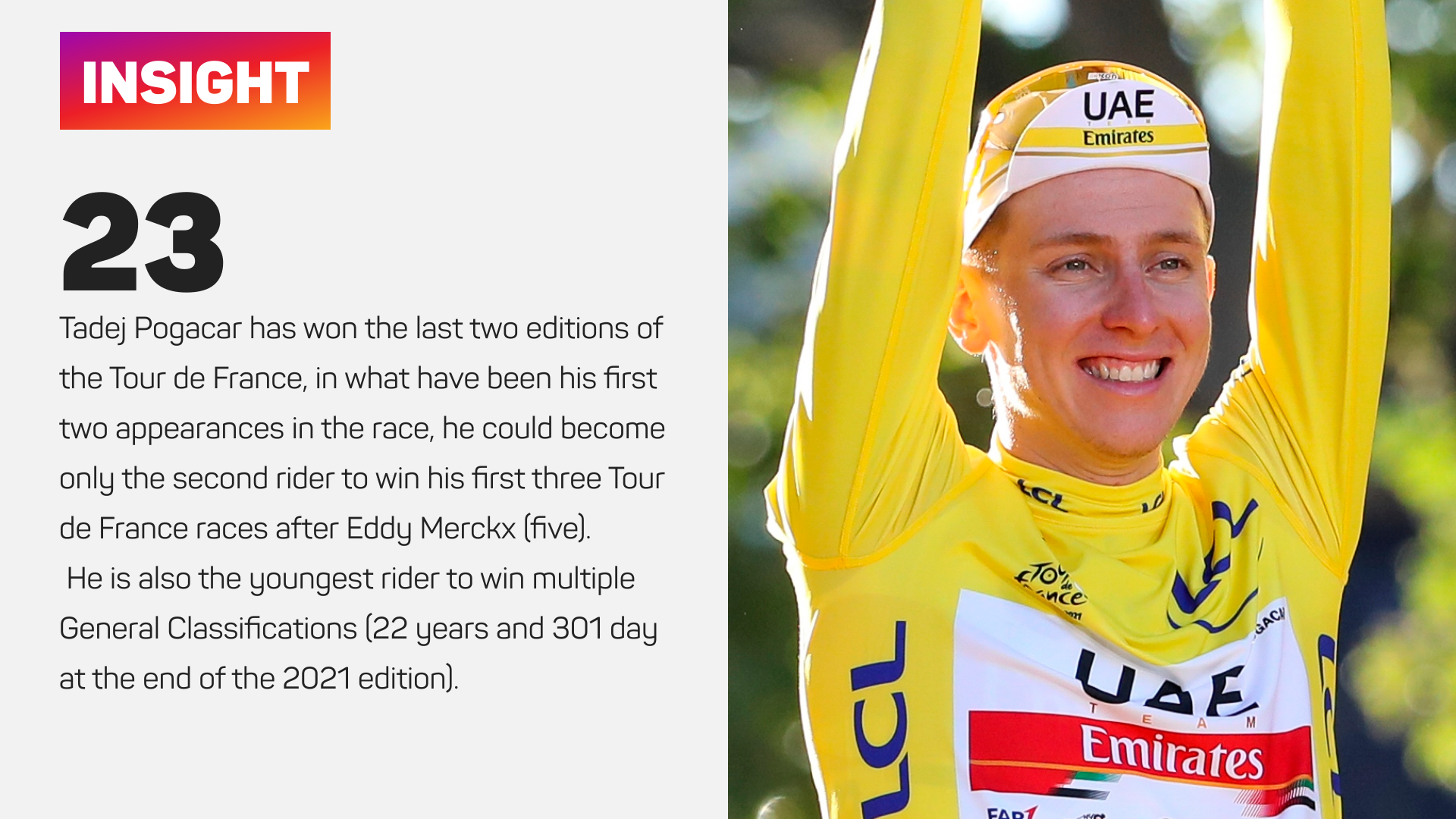 Roglic out for revenge

Roglic won the Criterium du Dauphine earlier in June, and looks well placed to push for what would be his fourth Grand Tour success, albeit his first outside of Spain.

The chance was cruelly snatched away in 2020, while Roglic was forced to abandon ahead of stage nine last year following a crash six stages prior.

Roglic is aiming to become the oldest rider to win the Tour de France since Cadel Evans in 2011 (34 years and 162 days).

He will be 32 years old and 268 days on the last day of this year's race, but is the prime contender from a strong Jumbo-Visma team.

Their line-up includes six-time Tour de France stage winner Wout van Aert, Jonas Vingegaard, who finished second overall in 2021, and Sepp Kuss, an exceptional climber who last year became the first American to win a stage at the Tour de France since Tyler Farrar in 2011, while Steven Kruijswijk is one of three riders in the squad to have finished on the GC podium before.

Van Aert is the pick of the supporting cast, with his six stage wins between 2019 and 2021 the joint-highest in that period alongside Pogacar.

Indeed, the Belgian won the final two stages last year and could become the first rider to win three successive individual stages (not including time trials) at Le Tour since Italian sprinter Alessandro Petacchi in 2003.

No Bernal, but INEOS looking strong

Egan Bernal has not yet fully recovered from a serious crash he suffered earlier this year, meaning INEOS Grenadiers are without one of the best in the business.

Yet their team is still one to be reckoned with. Captain Geraint Thomas is one of just three riders in the provisional start list to have won Le Tour (along with Pogacar and Chris Froome), with the Welshman heading to France on the back of his sole victory of 2022 so far, in the Tour de Suisse.

Meet your Grenadiers: ready to go all in at #TDF2022 pic.twitter.com/70f4i3HgWV

Only Merckx (in 1974) and Bernal (2019) have won both the Tour de Suisse and the Tour de France in the same season, and while a Thomas push for GC glory looks unlikely, INEOS have real depth.

Tom Pidcock is one of the brightest prospects in cycling, having triumphed in the Tokyo Olympic Games mountain biking and the World Championships (cyclo-cross).

He is riding alongside Adam Yates, the winner of the white jersey in 2016, and time trial world champion Filippo Ganna.

Stage 20 between Lacapelle-Marival and Rocamadour (40.7km) will be the longest individual time trial in the Tour de France since 2014, and Ganna, a six-time stage winner at the Giro d'Italia, will be looking to come to the fore there.

Cavendish denied a shot at history

Despite Pogacar's dominance, Mark Cavendish provided the most remarkable story at the 2021 Tour de France. His comeback was one for the ages.

Cavendish had not featured at the Tour de France in 2016, but last year he won four stages to match the overall record of Merckx (34 stage victories) that had stood since 1975. 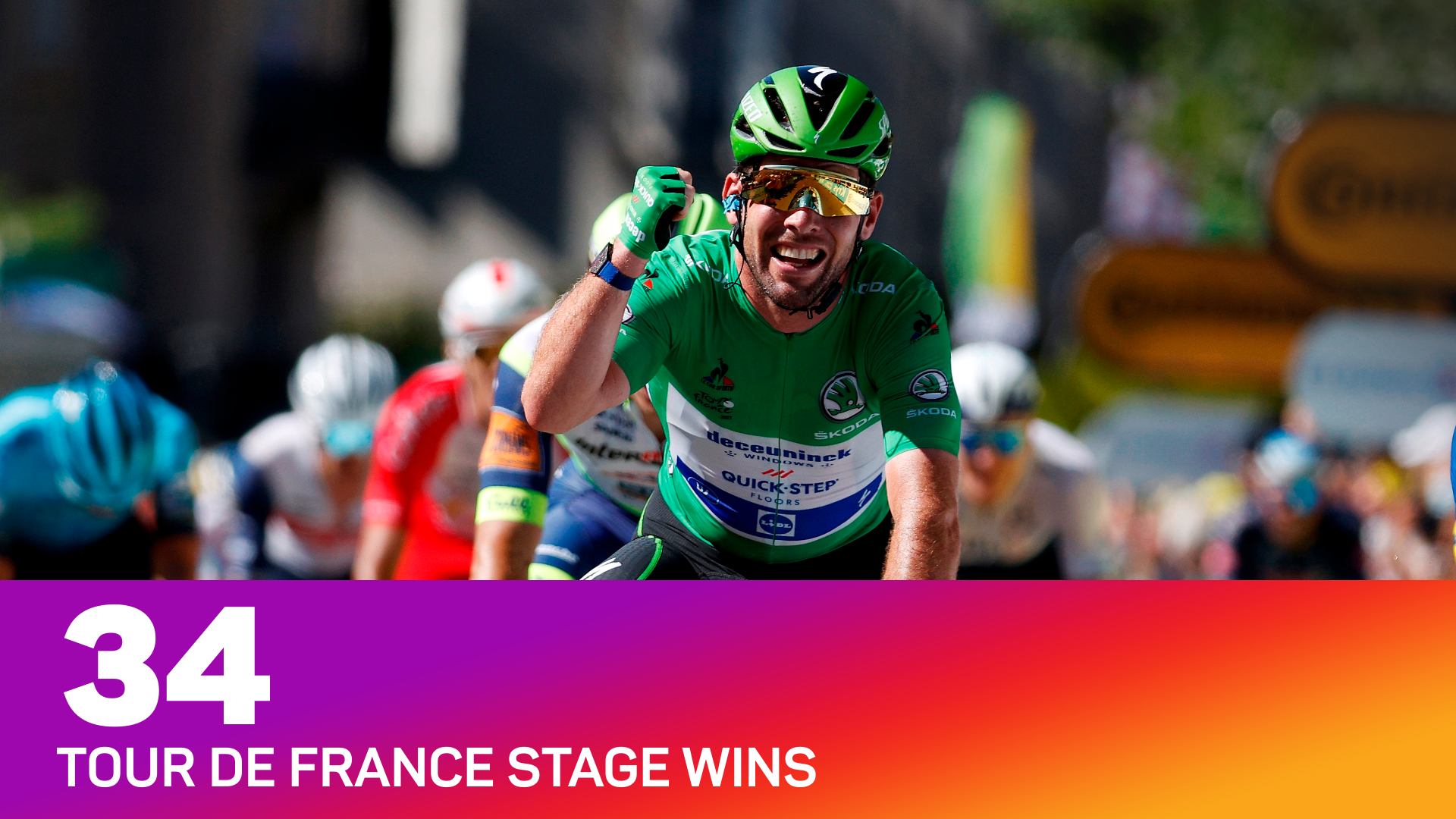 The Manxman was unable to surpass it on the Champs-Elysees, however, and his chance of becoming the outright record holder may well have gone, after Quick Step-Alpha Vinyl went with Fabio Jakobsen (who has 10 sprint wins this season) as their sprinter.

Quick-Step Alpha Vinyl Team riders have led the points classification in the Tour de France in each of the last 33 stages of the race, with three of their riders winning the green jersey in that time. Julian Alaphilippe is one of them, but like Cavendish he has missed out.

France out of luck?

Alaphilippe has won six of the last nine stages won by a French rider in the Tour de France, and would have been aiming to become the first home rider to win a stage at five consecutive editions since Bernard Hinault (1978-1982).

As it is, Alaphilippe will have to watch on, and with that France's slim hopes of a home success seem to have dwindled further still.

Romain Bardet has achieved five top-10 finishes in the GC standings. That is the most for a French rider since Virenque (six between 1994 and 2000), yet Bardet has finished only two of his last four Grand Tours and it would be a shock if the Team DSM man challenged.

Pierre Rolland will participate in his 13th Tour de France, the joint-highest tally among all riders on the provisional start list, alongside Imanol Erviti, while Thibaut Pinot will make his first Grand Tour start since the 2020 Vuelta a Espana, when he abandoned after two stages. This will be his ninth appearance in La Grande Boucle, but he has finished only four times.

The last time a Frenchman did not win a stage was in 1999 – since then, 59 stages have been won by French riders – but you might not bet against that run ending this year.

Vuelta a Espana: Roglic aims for historic success as Valverde has his last dance

Jonas Vingegaard stole the show at the Tour de France, but Jumbo-Visma team-mate Primoz Roglic will be the main man at the Vuelta a Espana.

Quintana pulls out of Vuelta a Espana amid drug infringement allegations

Nairo Quintana was retrospectively disqualified from the Tour de France on Wednesday, and has now withdrawn from the Vuelta a Espana.

Chris Froome contracted COVID-19 during the Tour de France and has only just recovered ahead of the Vuelta a Espana starting on Friday.

Bernardo Silva continues to be linked with Barcelona and Pep Guardiola cannot guarantee the playmaker will remain at Manchester City.

Sharjah FC have called off their loan move for Villarreal's Paco Alcacer, just two days after it was announced.

Christophe Galtier wants to plump up his Paris Saint-Germain squad with fresh signings, but getting the deals done is proving complicated.