The Tokyo Olympics came to a close on Sunday, but only after 13 more gold medals were handed out.

Kipchoge crossed the line one minute and 20 seconds ahead of runner-up Abdi Nageeye to become the third athlete to win the event at back-to-back Games.

In doing so, the 36-year-old – who previously took 5,000 metre silver in 2008 and bronze in London four years later – believes he has inspired a generation of runners.

"It means a lot to me, especially at this hard time," he said. "Last year was postponed, and now it has happened.

"I think I fulfilled the legacy by winning the marathon for the second time. That's my total happiness, my inspiration for the next generation."

The final day of action at the 2020 Games ultimately belonged to the United States, though, as they collected three golds to finish above China at the top of the medal table. 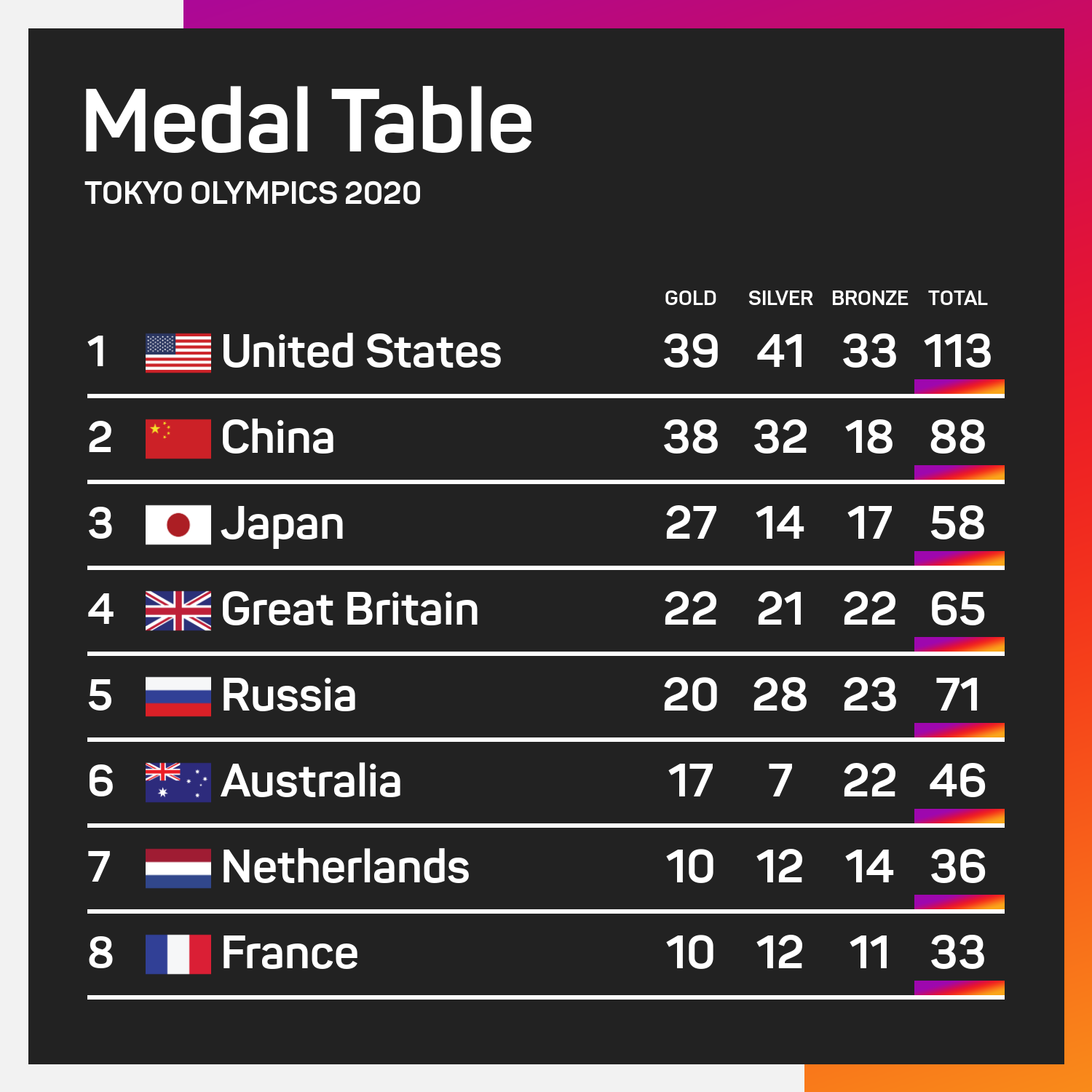 USA's victory in the women's basketball would have come as little surprise given it is their seventh straight success in the competition.

Sue Bird and Diana Taurasi each picked up their fifth gold medals, while for Japan the silver was their first medal of any sort in the sport.

"The only thing about getting older, you know all the bad stuff that can happen," Bird said. "We lost in the 2006 World Cup. We tasted that and that's always been the driver.

"So, when we actually have the medal around our necks, it just feels so good. It's a sense of relief in a lot of ways."

While success in the women's basketball is par for the course, overcoming Brazil in the volleyball final provided USA with their first gold medal in the event.

Jennifer Valente completed the hat-trick for the Americans in the women's cycling omnium, the 26-year-old delivering her country's first track cycling gold since 2000.

She led from start to finish, despite crashing in the final points race, with home favourite Yumi Kajihara taking silver.

"There were some bumps. It was actually quite a short day as far as omnium goes," Valente said. "That was something that was very much on my mind, that we played into.

"Crashing in the point races is never ideal. I was just trying to get back on my bike, make sure I was okay, and get back in the race as soon as possible."

But it was a familiar outcome in the men's keirin as Jason Kenny finished 0.763 seconds ahead of Azizulhasni Awang of Malaysia to win his seventh Olympic gold medal.

"It's a bit of shock, I think," Kenny said of his latest medal success. "I really wanted to cross the finish line. I am absolutely buzzing.

"Going into the final I didn't expect anything other than a five, really. I was hoping to kind of get stuck in, and hopefully come away with some silverware.

"To win at the corner on my own like that is absolutely buzzing."

We swear we can stop posting them anytime. pic.twitter.com/lwsIQV3CYD

The final four boxing gold medals were up for grabs on Sunday and plenty of focus was on the super-heavyweight bout between Bakhodir Jalolov and the USA's Richard Torrez.

Twenty-two-year-old Torrez started strongly with a ferocious assault in the first round, but Uzbekistani boxer Jalolov recovered and won unanimously.

"I've never felt this much pressure in fights a day in my life," Davis said. "I'm glad I got to experience this because it did make me a better fighter.

"I'm not cool with winning silver, but it's something I've got to live with and I'm okay with that. I'm gonna live with it and we're just gonna take it to the next level."

In the female categories, Kellie Anne Harrington beat Brazil's Beatriz Ferreira in the lightweight final to earn Ireland their second gold of the Games, while GB's Lauren Price outclassed Li Qian to win the middleweight final on points.

The Brooklyn Nets suffered their third double-digit defeat this season without Kyrie Irving, going down to the Miami Heat on Wednesday.

The Los Angeles Lakers must again cope without LeBron James against the Oklahoma City Thunder on Wednesday.

Valverde to retire after 2022 season

At the age of 41, Alejandro Valverde plans to enjoy one more year on the circuit before retiring at the end of 2022.

Russell Westbrook insists he and the Lakers can remain "focused" ahead of his return to Oklahoma following their win over the Spurs.

NBA MVP Nikola Jokic did not play in the second half Tuesday due to a knee contusion but the Denver Nuggets believe he will be fine.

With LeBron James sidelined due to an ankle injury, the Los Angeles Lakers relied on their other superstars to defeat the Spurs.

Budenholzer hails 'aggressive' Giannis: That's when Bucks are at our best

Giannis Antetokounmpo gave the Milwaukee Bucks the "extra gear" they needed, according to coach Mike Budenholzer.

Xavi has reportedly agreed to take over at Barcelona, but said during a news conference on Thursday he was only thinking about Al Sadd.

Cristiano Ronaldo is to become a father of six after he and Georgina Rodriguez announced they are expecting twins.

Raducanu and Halep on course for Transylvania Open showdown

US Open champion Emma Raducanu doubled her tally of WTA Tour wins and could come up against Simona Halep in Cluj.

Australia made it two T20 World Cup wins out of two, David Warner ending his run drought in an emphatic victory over Sri Lanka.

Antonio Conte made Romelu Lukaku feel "wanted", and that helped the striker to turn around his form after a tough time at Manchester United.

Lautaro Martinez has signed a new deal with Inter that reportedly does not contain a release clause.

Koeman sacked by Barcelona: Pedri 'will always be grateful' to Dutchman

Ronald Koeman gave a number of youngsters a chance during his time at Barcelona and talented midfielder Pedri has thanked the Dutchman.

Wales captain Alun Wyn Jones will have played for his country more times than any other player when he starts against New Zealand.

Mbappe ruled out of PSG's clash against Lille, Messi doubtful with minor injury

Paris Saint-Germain are without Kylian Mbappe for the visit of Ligue 1 champions Lille and have a concern over Lionel Messi.

Ronald Koeman was sacked by Barcelona on Wednesday and the LaLiga side have moved to put Sergi Barjuan in temporary charge.