Carmelo Anthony's Team USA record now belongs to Kevin Durant, but the forward has already identified the next holder.

In scoring 23 points in the United States' 119-84 win over the Czech Republic – a victory that secured their progression to the quarter-finals at Tokyo 2020 – Durant reached 354 in Olympic play.

He is now past Anthony (336) and will expect to stretch his advantage in pursuit of a third Games gold.

The three-pointer that took Durant to new heights gave Team USA their first lead midway through the second quarter, with the Brooklyn Nets forward leading his country's recovery from a slow start.

Tatum took control thereafter, though, finishing on a game-high 27 points.

The 23-year-old is appearing at his first Games but has 50 points through three appearances, prompting Durant to make a bold claim.

Appearing alongside Tatum in a post-game interview, Durant said: "This guy to the left, I think he's going to be the next one to break that record." 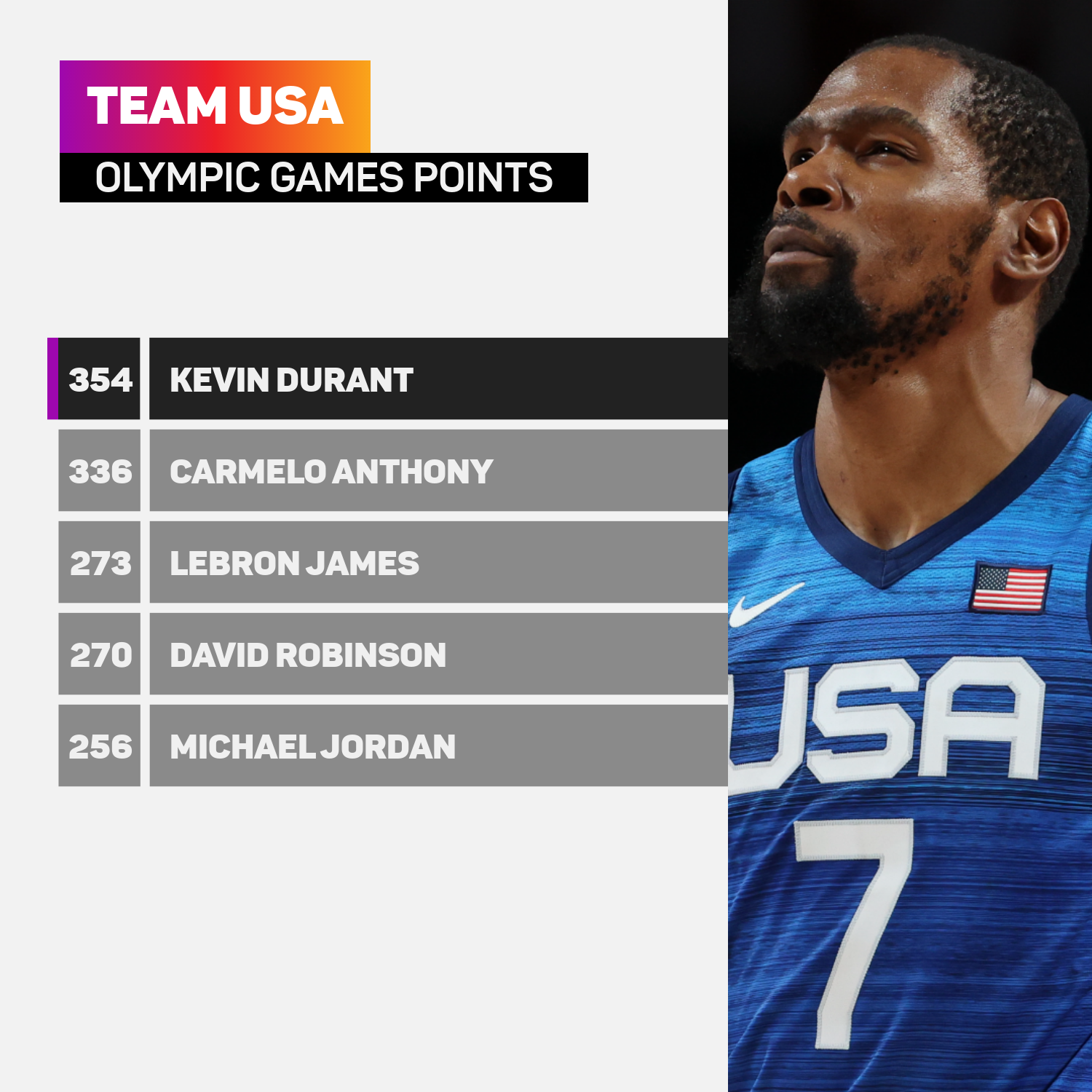 Tatum boosted his total with five-for-10 three-point shooting, as the United States made 20 shots from deep – tied for their third-most in an Olympic game.

"He attacks for himself and for a team-mate at the same time, and he didn't do that in the very beginning in the league; he was just a scorer.

"But now he's valuable because he does the other things. He's starting to rebound better. We're telling him that it's important, we're not that big and we do need him on the boards."

In the same news conference, Durant was asked again about his achievement in surpassing Anthony.

"You just think about all the players that played in this programme and [it is] pretty cool to be among names like that," he said.

"Carmelo is a guy that I played on two Olympic teams with and I've seen his approach to these games and I try to steal some of his techniques and approach.

"It's still pretty weird for me to do stuff like this because I play a team sport and I try my hardest to make it about the group.

Ryder Cup: Spieth and Schauffele among Stricker's picks as Reed misses out

Patrick Reed was the most notable absentee as the United States unveiled their 12-player Ryder Cup roster to take on Europe.

Weston McKennie was suspended and sent home from the USA camp after a breach of team policy but still has a future with the national team.

Christian Pulisic's return was not enough to spark the United States, who shared the spoils with Canada on Sunday.

LaMarcus Aldridge announced a sudden retirement in April, but he will be back in the NBA in the new season after doctors cleared a comeback.

Olympic chiefs and NHL officials have agreed terms for the release of elite stars from the North American league for China's 2022 Games.

Vinicius Junior and Karim Benzema scored as Real Madrid came from behind to scramble a win away at Valencia on Sunday.

PSG beat Lyon 2-1 in Ligue 1 thanks to Neymar's penalty and a late, late header from Mauro Icardi at Parc des Princes.

Ante Rebic struck to cancel out Alvaro Morata's opener as Milan hit back to claim a 1-1 draw against winless Juventus.

Tottenham were a match for Chelsea until half-time before a terrible second half, but Nuno Espirito Santo focused on the positives.

Chelsea scored three second-half goals to beat Tottenham and go top of the Premier League after some choice words from Thomas Tuchel.