Tokyo Olympics: From Comaneci to Biles, gymnastics makes the world gasp in awe

Elite-level gymnastics is thrust into the global spotlight every four years at the Olympics Games, and it is a massive ratings winner.

Comaneci, Korbut, Biles, Scherbo. Those names are as engrained into Olympic legend as Bolt, Beamon, Griffith-Joyner and Owens.

Gymnastics might pass under many radars outside Games time, but television chiefs have it down as a ratings-winning banker.

There is no other sport that combines quite the same level of athleticism, artistry and acrobatic magnificence, and pairs those factors with a stack of glamour and more than a hint of danger.

Most viewers of the Olympics will know how it feels to casually sprint 100 metres or swim a length or two, but the parallel bars, the pommel horse and the beam were typically last experienced as dreaded apparatus hauled out of school sports equipment vaults.

Anybody who avoided making a muggins of themselves deserved immediate respect, with these implements of humiliation ripe for dishing out a torturing.

On the Olympic stage, we see the human species at its most agile, yet vulnerable too, and that is why gymnastics has been the most viewed sport in the Games on American networks for many years.

Here, Stats Perform looks at three of the great Olympic gymnasts of the last 50 years, and considers who might emerge as a star at the Ariake venue in Tokyo this year.

When Romanian Comaneci scored the first 'Perfect 10' in Olympic history at the Montreal Games of 1976, famously even the scoreboards were unprepared for her fabulous feat. They showed 1.00, with the Omega technology not built to display top marks. Comaneci was 14 years old, and she had made history on the uneven bars in the team competition. It was incredibly just the start of a run of 10s from Comaneci, who produced six more during her heady time in Canada, winning gold medals in the all-around event, the uneven bars and the balance beam. 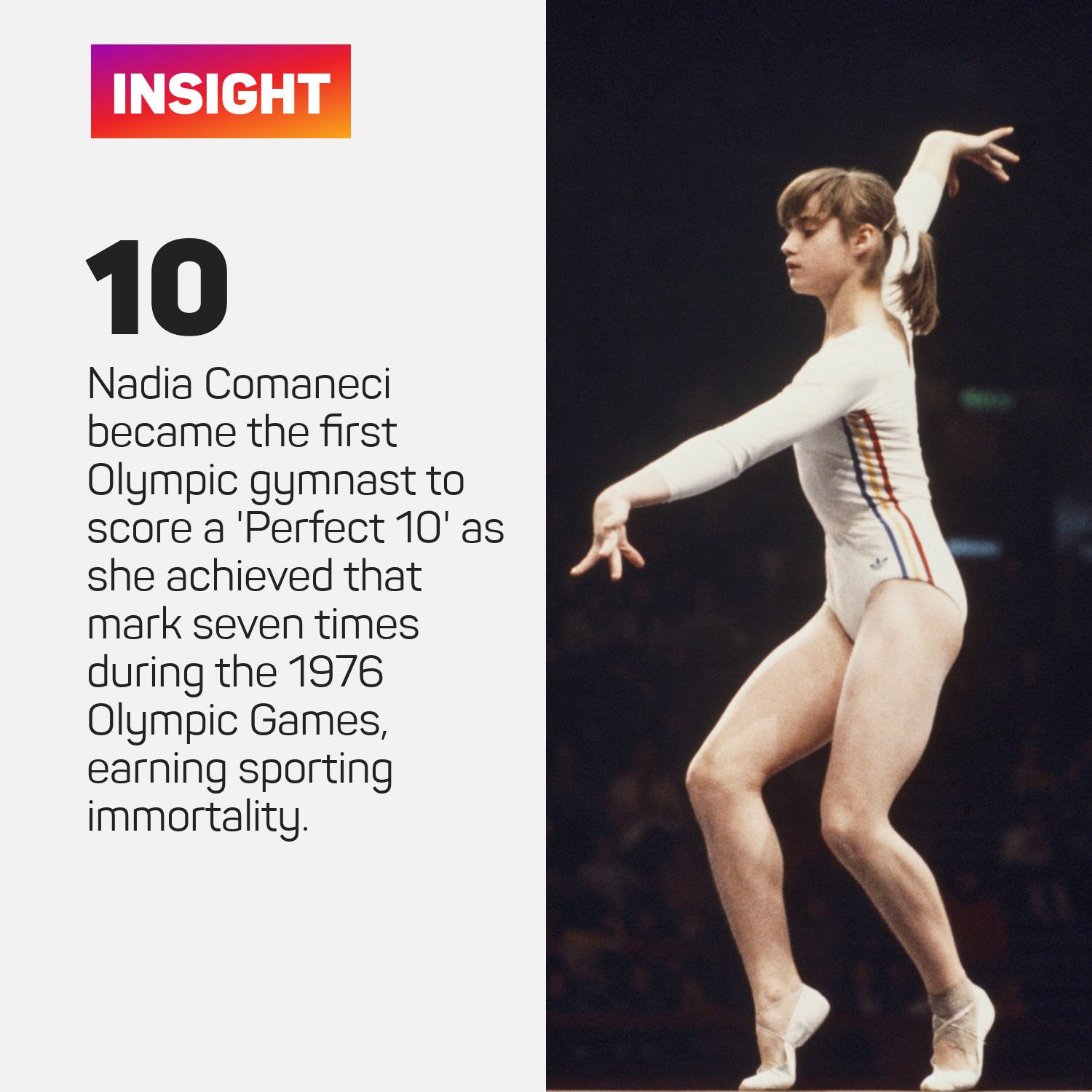 The young Comaneci would have watched Korbut dazzle at the 1972 Munich Olympics, where the 17-year-old brought daring new routines to the Games stage. Her backflip to catch on the uneven bars drew gasps from the crowd and media alike. Television footage from the time shows Korbut produce her mesmerising routine, with one commentator questioning: "Has that been done before by a girl?". His colleague responds: "Never, not by any human I know of!"

The Korbut flip was born, a backward somersault on the beam followed, and millions across the globe watched in astonishment at her audacity and execution. The teenager from the Soviet Union won gold medals in the team, floor and balance beam disciplines, pushing gymnastics to new heights.

It has often been the case that women gymnasts have attracted more admiration than the men, but in 1992 it was Scherbo who stole the show. The 20-year-old Belarusian was a colossus, winning six gold medals for the Unified Team of former Soviet states with a revelatory exhibition of physical strength, craft and control.

Scherbo became champion at the parallel bars, vault, rings, pommel horse, team event and the all-around event. His haul of golds has only ever been surpassed in a single Olympics by swimmers: Michael Phelps (eight gold medals at Beijing 2008) and Mark Spitz (seven golds at Munich).

Simone Biles: Great already, and now back for more

What does Biles have in store for a Tokyo encore to her spectacular Rio performance? It was well known before the 2016 Olympics was that Biles was rather special, and the American delivered on the biggest stage, with four gold medals and a solitary bronze, becoming the first quadruple Olympic gymnastic champion since 1984 when the great Romanian Ecaterina Szabo also achieved success on that scale. Biles, a formidable character and sensational competitor, is stretching the limits of athletic achievement every time she competes, taking her beloved sport to new audiences and inspiring generations of youngsters to try the sport.

Now 24 years old, Biles appears to be in great shape for more success in Japan, but watch out for her team-mate Suni Lee too. The 18-year-old outscored Biles on day two of the US Olympic trials

Could Chinese teenager Tang be in the picture to deny Biles the all-around title in Tokyo? The 18-year-old took a surprise silver behind Biles at the 2019 World Championship, and it remains to be seen whether that was a one-off or if she can limit the errors that have at times impeded her success and strike again for a medal.

She seems sure to be somewhere in the frame, but the Olympics demands perfection or at least somewhere close to it. Tang has abundant talent, and how she competes against the world's best again, after being limited lately to domestic competition, will be one of many matters of intrigue under the spotlight in the Ariake gymnastics hall.