All-rounder Mitch Marsh made a blistering unbeaten half-century to claim the man of the match award in Australia's T20 World Cup final win.

Mitch Marsh reflected on an "amazing six weeks" after he made a record-breaking unbeaten half-century as Australia beat New Zealand by eight wickets to win a maiden T20 World Cup title.

Australia pulled off another outstanding run chase to beat their trans-Tasman rivals at Dubai International Stadium, where Kane Williamson's outstanding 85 off 48 balls proved to be in vain.

The Black Caps posted 172-4 thanks to Williamson's masterclass, the skipper's knock equalling Marlon Samuels' record score in a T20 World Cup final for West Indies in their victory over England five years ago.

Australia cruised to their target with seven balls to spare, player of the tournament David Warner (53 from 38 balls) and Marsh starring with the bat.

Marsh finished unbeaten 77 not out off 50 balls, breaking a record Williamson had set earlier by making the fastest fifty in a T20 World Cup final from just 31 deliveries.

The all-rounder has never really fulfilled his potential at international level due to injuries, but showed what he is capable on the big stage and revelled in a historic evening for Australia.

Man of the match Marsh said during the post-match interview: "I don't really have words, what an amazing six weeks with this group. Love them to death. World champs." 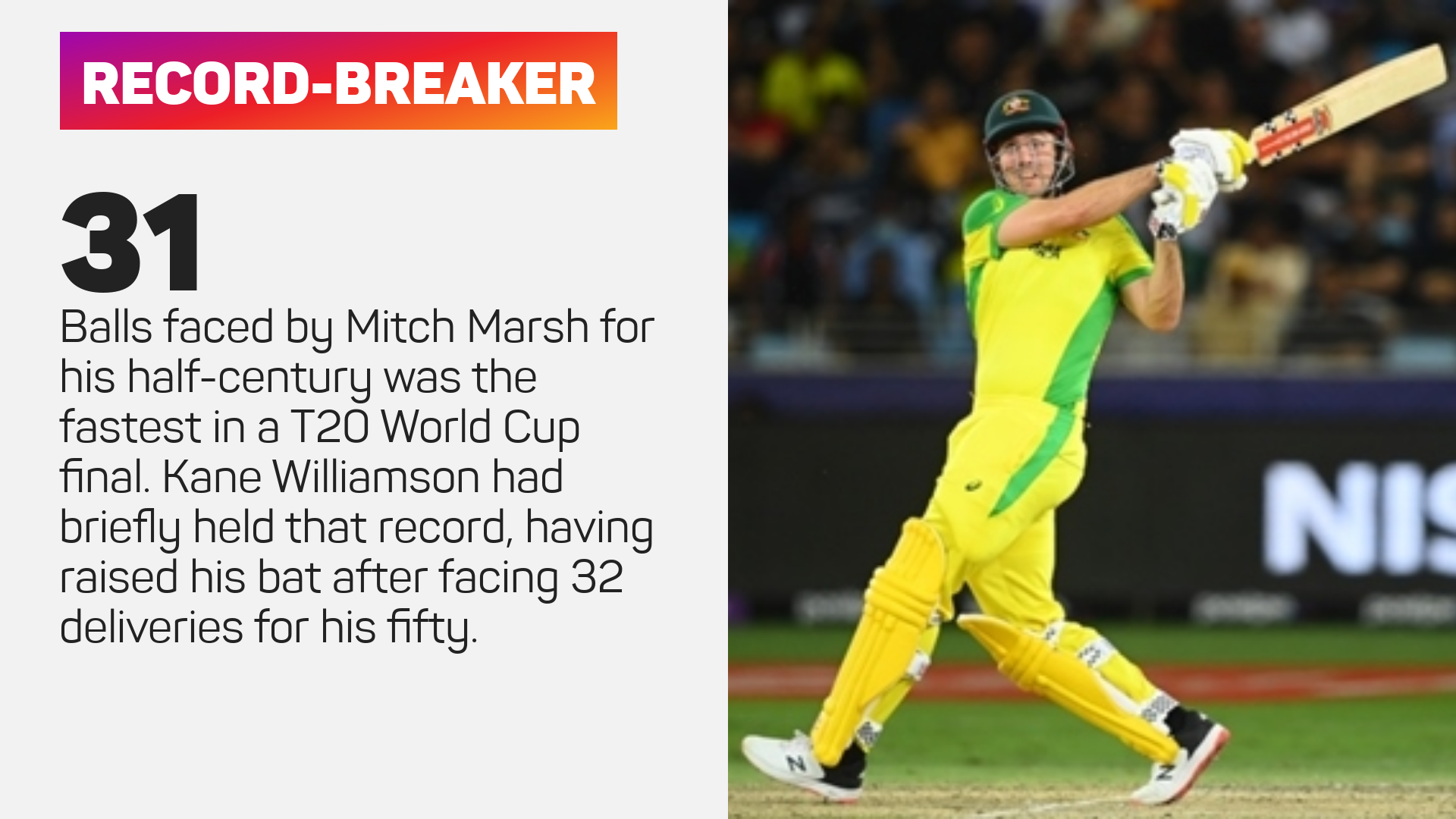 Marsh hit the first ball he faced for six, putting Mitchell Santner into the stand, and cleared the rope another three times, as well as hitting a further six boundaries.

He relished the opportunity to bat at number three and was determined to grasp his chance.

The 30-year-old said: "The coaching staff came up to me in the West Indies and said you're going to bat three for this tournament, and I jumped at it. I have the staff to thank for backing me and getting me up the top there.

"I just love playing for this team. I just wanted to get out there and have a presence, which big Marcus Stoinis always talks to me about. I can't believe it. It's unbelievable."

Questions had been asked about Warner's place in the team coming into the tournament, but the opener finished as the second-highest run-scorer with 289 behind Pakistan captain Babar Azam (303).

Warner said: "I always felt really well. I didn't get much time in the middle in the practice matches but it was about going back to basics and getting on some hard synthetic wickets and get hitting balls. I managed to do that and then I scored runs.

"This is definitely up there with 2015. Being part of the 2010 [World T20 final) defeat to England hurt, but the women winning made us a feel a bit of that. These guys are a great bunch of guys. We've got a great support staff and support around the world."

Rahul passed fit to lead India on tour of Zimbabwe

KL Rahul is set to play his first competitive cricket since the Indian Premier League season when India tour Zimbabwe this month.

Under-pressure New Zealand coach Ian Foster has made four changes for the All Blacks' clash with the Springboks in the Rugby Championship.

The All Blacks have lost five of their past six Tests and subsequently have slumped to a new low in the world rankings.

No point 'sulking' for All Blacks after Springboks loss, says embattled coach Foster

A 26-10 loss in Mbombela is the All Blacks' fifth in their last six games, but their embattled coach is soldiering on for now.