T20 World Cup: Gayle in the record hunt, England out for revenge and Kohli's last shot

The T20 World Cup gets underway on Sunday. Using Opta data, Stats Perform previews the tournament, as the West Indies aim for a third title.

After a COVID-19 enforced postponement, the T20 World Cup will finally get underway on Sunday.

Initially scheduled to take place in Australia last year, and then India following the postponement, the competition will now take place in the United Arab Emirates and Oman.

A first round featuring eight teams, including debutants Namibia and Papua New Guinea as well as 2014 champions Sri Lanka (who have reached three T20 World Cup finals, more than any other side), gets the tournament up and running, with four teams progressing into the Super 12 stage.

The West Indies are aiming to defend their title, having edged out England in the 2016 edition. Eoin Morgan's team, who have the world's top T20 batsman in their ranks, are sure to be one of the main challengers for the Windies' crown.

Virat Kohli's India are among the favourites, while Pakistan will be hoping captain Babar Azam delivers. Australia and New Zealand (the most economic side when it came to bowling in 2016) cannot be discounted either, with South Africa also improving in recent years.

It promises to be a thrilling tournament and, with the help of Opta, Stats Perform looks at some of the key data points heading into the tournament.

Gayle on the record trail

The Windies have won two of the last three T20 World Cups, triumphing in 2016 and 2012 either side of Sri Lanka's success, and they remain the only team to have won the tournament on multiple occasions. Key to their sustained success has been Chris Gayle, who at 42, is still the face of the sport in the Caribbean.

He is just 80 runs away from becoming the second player to score 1,000 runs at the T20 World Cup. In fact, he needs only 97 runs to surpass Mahela Jayawardene's record tally of 1,016. Gayle already holds one competition record, for the number of sixes (60), while he averages 40 across 26 innings at the tournament, with a brilliant strike rate of 146.7.

New Zealand great Brendon McCullum (123) is the only player to have a higher T20 World Cup score than Gayle's 117, and you would not bet against the Windies talisman claiming that record either. 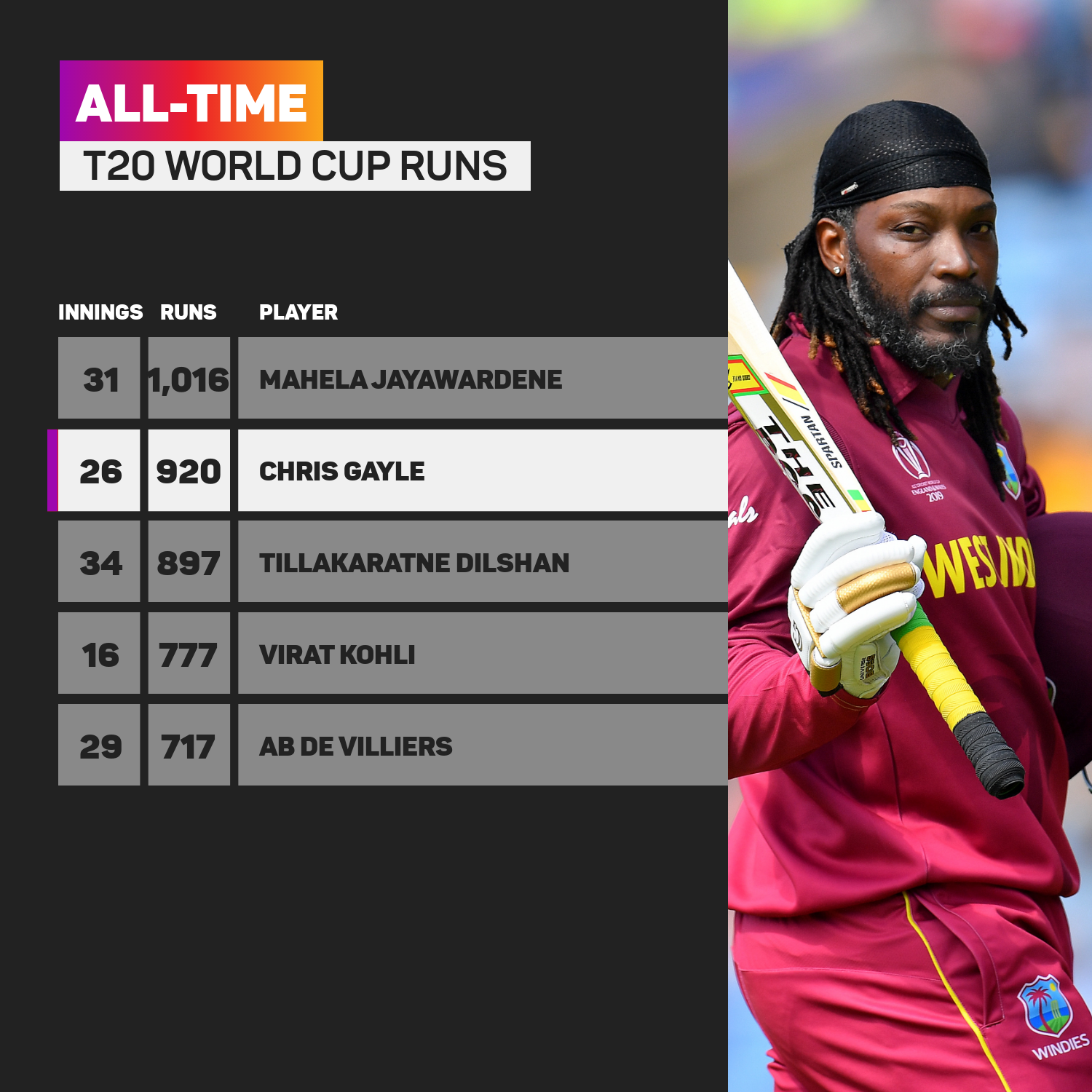 Malan and Livingstone to lead England

The Windies' first opponents in the Super 12 phase will be England, who will be out for revenge. They had a batting strike rate of 148 in 2016, the best of any team, but still fell short. Yet while the West Indies are now ninth in the ICC's T20I rankings, Morgan's men sit top of the pile.

Morgan, not shy of a big innings himself, is also able to call on Liam Livingstone, who has made a fantastic start to his T20I career.

As was the case at the 2019 World Cup, England's batting depth is exceptional, though they are shorn of Ben Stokes, who always seems to deliver when it matters most. 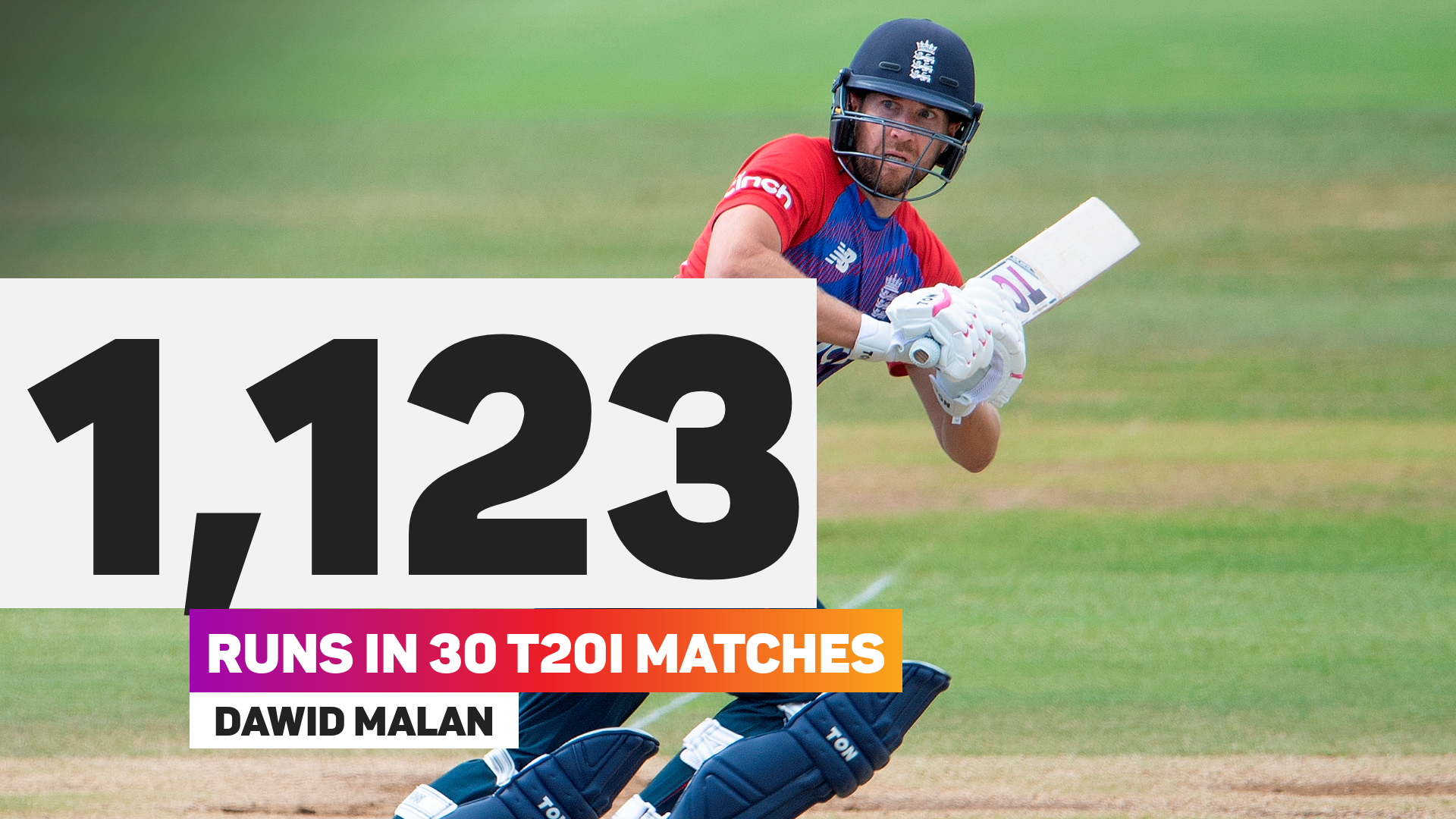 Not too far behind Malan in the ICC's T20I batsman rankings is India star Kohli, who is stepping down as the captain in the shortest format of the game following the World Cup.

Winners of the inaugural T20 World Cup in 2007, India have only reached one other final, back in 2014. Kohli was named player of the tournament, top-scoring with 319 runs, and as he prepares to bow out as captain, he will be determined to cap off his tenure on a high.

No player has made more half-centuries in the competition than the 32-year-old (level with Gayle on nine), though Kohli is yet to log a century.

Kohli's hopes may well rest on the shoulders of Rohit Sharma. The opener debuted with an unbeaten half-century back in 2007 and has made 111 T20I appearances, behind only Shoaib Malik (116) and Mohammed Hafeez (113).

Only Martin Guptill (147) has struck more sixes than Sharma (133) in the format, while over the last five years, India have won every time the batsman has scored 50+ runs. 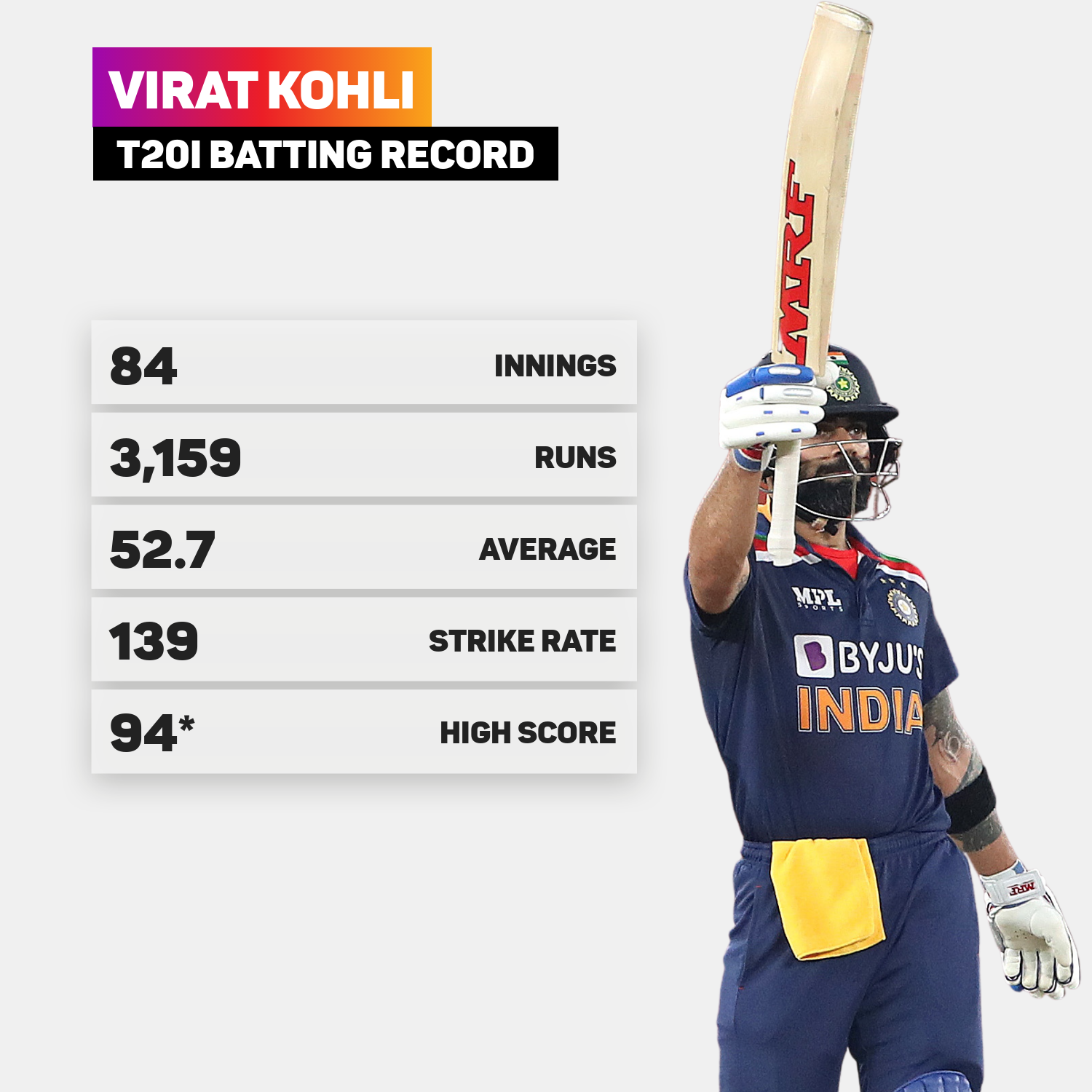 They do, however, possess a supreme batsman in the form of captain Babar.

Babar, who has only managed one century to date (122 from 59 balls against South Africa earlier this year) was the fastest player to 2,000 T20I runs (52 innings) beating Kohli's previous best of 56, and an enticing encounter between the sub-continental rivals takes place on October 24.

India were agonisingly close to winning a first Test that ended in a draw, and now they will chase victory over New Zealand in Mumbai.

Alex Carey will be behind the stumps for Australia against England in the opening Test.

Jack Leach has been speaking about the return of Ben Stokes to the England setup, as well as his admiration for Australia's Nathan Lyon.

Michael Vaughan was stood down from the BBC's Ashes coverage, but still remains on a contract with the broadcaster.

Alastair Cook will continue playing for Essex, who he helped to win back-to-back red-ball titles following his England retirement.

On the fifth anniversary of his appointment as England manager, Gareth Southgate has reflected on the team's progress to date.

Arsenal and Liverpool in mourning as Ray Kennedy dies aged 70

Ray Kennedy, who enjoyed highly successful spells with Arsenal and Liverpool, has died at the age of 70.

Buttler feels he has 'nothing to lose' ahead of Ashes opener

Jos Buttler has never played a Test match in Australia but is relishing the opportunity of proving his qualities in the Ashes.