Bryson DeChambeau insisted the job is not over for the United States after racing clear of Europe on day one in their quest to wrestle back the Ryder Cup.

Team USA have their biggest opening-day lead at the Ryder Cup since 1975 thanks to a dominant start – DeChambeau and his team-mates earning a commanding 6-2 advantage on Friday.

DeChambeau teamed up with Ryder Cup rookie Scottie Scheffler in the four-ball, halving their matchup against world number one Jon Rahm and Tyrrell Hatton.

Powerhouse DeChambeau hit an astonishing 417-yard drive on the 581-yard par-five fifth hole, setting up an eagle to put himself and Scheffler one up in their four-ball contest with Rahm and Hatton.

"They fought hard every single shot out there, from what I saw, and, again, looking back on it, this is a great start, but the job's not over. We have two more days. A lot more golf. And we cannot lose our mindset to win."

On DeChambeau's fifth-hole bomb, Scheffler added: "That was probably the most excited he's ever been on a golf course was on number five. That wind, we had it on one of our practice days, and we figured out what he needed to do, so to have an opportunity to do that in competition was amazing. I was jacked up for him as well.

"I think he pushed it a little bit, but he smashed it. So thankfully he pushed it just a touch. If he pulls that ball at all, it's weird, there are two towers behind the green, I can't even describe to you - they are like 250 or 200 yards right of where I'm trying to hit my drive, and it's crazy for him to be able to commit to that shot.

"I know he's very happy to make a three as well; if he made a five, he said he was probably going to go home. It was great. That was a good spark for us and good momentum for the rest of the day." 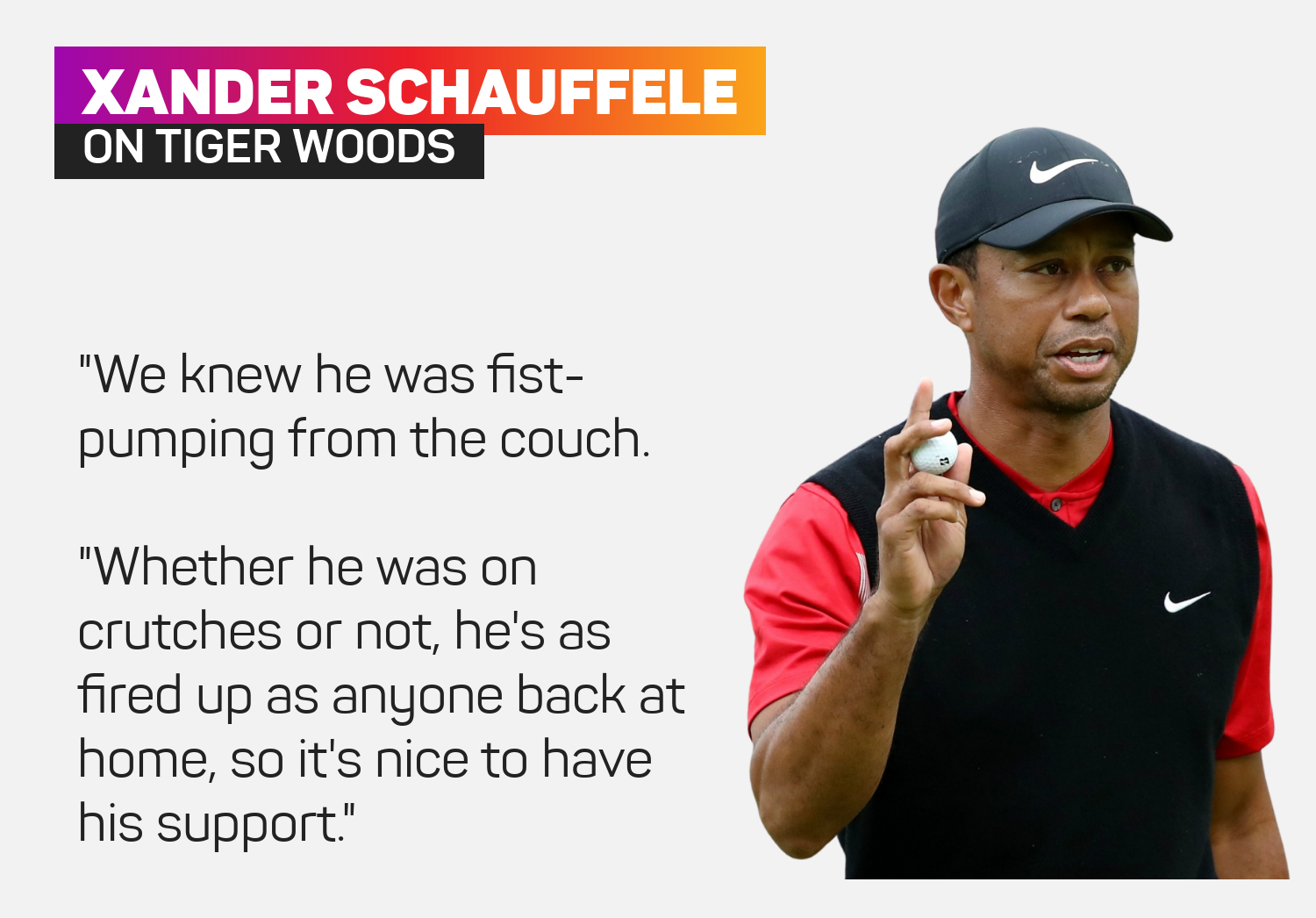 Tiger Woods is absent from this year's Ryder Cup as the 15-time major champion continues his recovery from the February high-speed car crash near Los Angeles that left him with serious leg injuries, and it remains to be seen whether he is capable of playing again on tour.

Despite not being among Team USA's Ryder Cup roster, the American superstar still had a telling influence on Friday, having reached out with a few words of encouragement.

Xander Schauffele revealed Woods sent a message on Thursday and Tony Finau elaborated on the text.

"Harry [Harris English] mentioned to me walking down number nine, like how cool it was that Tiger is so into it," Finau said during his post-round news conference. "I think that's the big thing is he's so invested in this team.

"He's not here physically, but you know, I think the gist of basically what he was saying was I'm cheering you guys on, I'm right there with you and go fight and make us proud.

"We were able to do that, and if TW's watching, thanks for that text, brother, I think it helps us a lot."

J.T. Poston became the third player in the history of the John Deere Classic to go wire-to-wire with his win on Sunday.

After missing the opening three major events on the PGA Tour to injury, Paul Casey has signed up to join the LIV Golf Invitational.

Branden Grace posted a final-round score of seven-under 65 to claim the win at LIV Golf Portland.

J.T. Poston posted a four-under 67 on Saturday to lead on 19-under after three rounds at the John Deere Classic.

With one round remaining it is Dustin Johnson and Carlos Ortiz sharing the lead, with Johnson's 4 Aces GC also leading the teams standings.

J.T. Poston extends lead to four strokes after second round of the John Deere Classic

After posting Thursday's best round, J.T. Poston backed it up with another six-under 65 to put a gap on the field heading into the weekend.

Keith Pelley says players who signed up for the LIV Golf Invitational Series knew there would be consequences.

Wimbledon: 'For the moment I am healthy enough to keep going' – Nadal looks forward to quarter-final

Rafael Nadal was bombarded with questions about his injuries after he reached the quarter-final in his return to Wimbledon.

Wimbledon: 'I've come a long way, that's for sure' – Kyrgios feels he is a changed man

Nick Kyrgios admitted he was dragged out of the pub at 4am before his 2019 clash with Rafael Nadal at Wimbledon, but said he has changed.

Wimbledon: 'I don't moan, I love it!' – Kyrgios revels in controversy and laughs off criticism

Nick Kyrgios is one of the stories of this year's Wimbledon, but the Australian says he loves to cause contention.

Rafael Nadal and Simona Halep were among the Wimbledon champions to celebrate the 100th anniversary of the Centre Court opening.