The Rugby Championship 2021: The Breakdown - Springboks stand in the way of All Blacks clean sweep

New Zealand have dominated the Rugby Championship and face South Africa in their final match looking for an 11th consecutive win.

The All Blacks beat the Springboks 19-17 last weekend to win the title with a game to spare and Ian Foster's side can complete a Grand Slam in this year’s tournament on the Gold Coast this weekend.

Three defeats in a row ensured South Africa were unable to retain their crown and the world champions slipped to third place when Australia beat Argentina in round five.

The Wallabies were already firm favourites to extend their winning run to four matches against the Pumas in a final-round double-header before six Argentina players were ruled out for breaching COVID-19 regulations.

Pablo Matera, Joaquin Diaz Bonilla, Felipe Ezcurra, Santiago Medrano, Santiago Socino and Sebastian Cancelliere were stopped at the state border when they attempted to return to their Gold Coast base following an unauthorised trip to Byron Bay on Wednesday.

New Zealand have won their last 10 Tests on the bounce and edged out the Springboks in the previous round to seal top spot.

This will be the sixth Test between New Zealand and South Africa on neutral territory; the All Blacks have won each of their past four meetings in that span, though the Springboks won their inaugural fixture.

The All Blacks have gained more metres (618), scored more points (38) and made more clean breaks (14) per game than any other team in the 2021 edition of the Rugby Championship.

Anton Lienert-Brown returns from injury at centre and will be expected to hit the ground running for the champions.

Wounded South Africa will be looking for number eight Duane Vermeulen to drive them on in what promises to be another almighty battle. 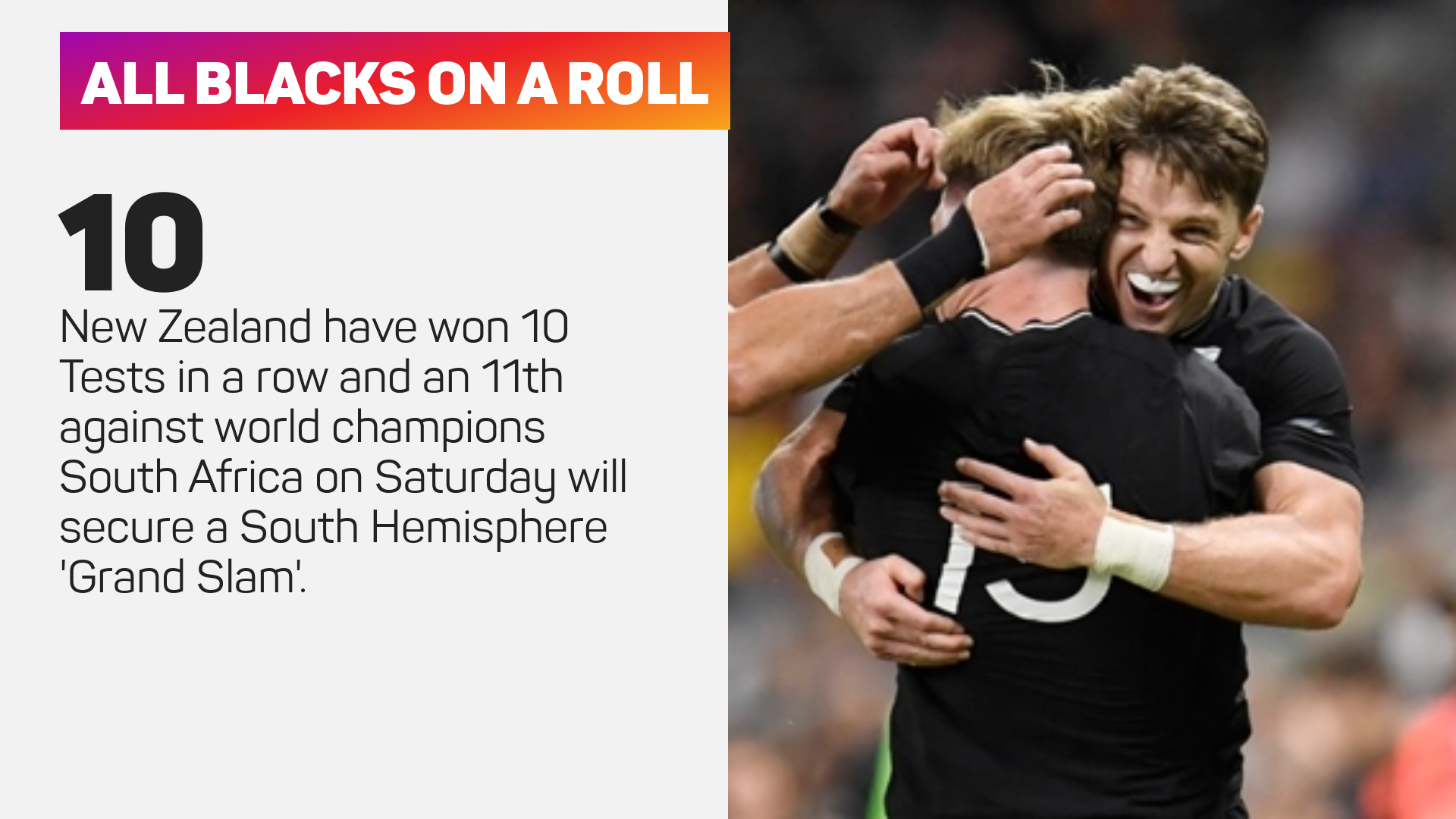 Australia's run of three consecutive wins is their longest since they managed four consecutive Test victories from October to November in 2017.

The Pumas have lost their past five Tests, after losing only twice in their 10 matches prior (W5, D3) to this tournament. The last time they went on a longer losing run was a 10-match span from September 2018 to September 2019.

Australia have missed the fewest tackles per game (12.2) and boast the highest tackle success rate (88.2 per cent) of any team in the 2021 edition.

Greg Holmes is set to become the oldest player to feature for Australia since World War II. At the age of 38, the prop – who has not played for his country since 2016 - was named among the replacements by head coach Dave Rennie.

Emiliano Boffelli had a mixed game last Saturday, gaining 44 metres from seven carries. He was wasteful from the tee, however, and will want to make amends this weekend.

The moment Holmesy was announced in Saturday's 23.

Alfio Basile is unhappy with how Mauricio Pochettino is utilising Lionel Messi and has criticised Paris Saint-Germain as a team.

James Pattinson has raised eyebrows by calling time on his Australia career at the age of 31.

Sean Wainui, who earned 10 caps for Maori All Blacks and also played for Taranaki, Crusaders, Chiefs and Bay of Plenty, has died aged 25.

Messi hits out at referee after Argentina beat Peru

Lionel Messi reacted to Argentina's victory over Peru via social media on Thursday.

Lautaro Martinez's 43rd-minute header settled the contest as Argentina stayed undefeated on the road to Qatar 2022 on Thursday.

Lionel Messi has previously been criticised for his Argentina performances, but Lionel Scaloni said he is thriving now.

As Australia prepare to start their T20 World Cup campaign, uncapped Josh Inglis is hoping to make his mark.

Doc Rivers discussed wantaway Ben Simmons prior to the Philadelphia 76ers' opening game of the season against the New Orleans Pelicans.

Leonardo Bonucci believes Juventus have rediscovered a "desire to suffer" since Cristiano Ronaldo left the club.

Whyte pulls out of Wallin fight with shoulder injury

Dillian Whyte is next in line to face Tyson Fury but an injury has called off his next clash with Otto Wallin.

'Nervous' Khachanov comes from behind in Moscow, Sinner progresses in Antwerp

Karen Khachanov rallied to avoid an upset in the Kremlin Cup, while European Open favourite Jannik Sinner progressed in Antwerp.

Sabalenka battles through in Kremlin Cup on return from COVID-19

Aryna Sabalenka and Garbine Muguruza made it through to the next round in Russia, but Elina Svitolina was not as fortunate in Spain.

Ole Gunnar Solskjaer reflected on another eventful night at Old Trafford, where Manchester United came from behind again.

Tuchel: Race is on to replace injured Chelsea duo Lukaku and Werner

With Romelu Lukaku and Timo Werner facing time on the sidelines, Thomas Tuchel said Chelsea must find solutions in attack.

Manchester United, inspired by Cristiano Ronaldo once again, came from two goals down to defeat Atalanta.

After struggling past Villarreal, Manchester United left it late as they came from behind once more against Atalanta on Wednesday.