Christian Horner has continued his push for the F1 budget cap to be increased and warned the title battle could be decided in court.

Red Bull boss Christian Horner fears that the Formula One title fight in 2022 could be "decided in law courts" due to global inflation and the season's budget cap.

The 10 teams on the grid have an annual maximum spend of £119million for the 2022 season, but amid rising costs across the globe, some have pushed for an increase to be announced – including Red Bull, Ferrari and Mercedes.

Others, such as Aston Martin, disagree, resulting in a difficult situation for F1 officials on what approach to take, but Horner has continued his push for a budget increase, warning the title battle could be decided in the courts.

"The way you design your car is within your control. That is something that you, together with your group of designers, you create. You're in control of your own destiny," he told Sky Sports.

"What we're seeing in the world at the moment, we're not in control of the inflationary costs that are affecting households around the world. In the UK, we're seeing predicted inflation at 11 per cent.

"That's a direct effect on staff, on raw materials, on electricity, on commodities, on supplied parts. I think it genuinely is a force majeure situation that the FIA need to deal with. 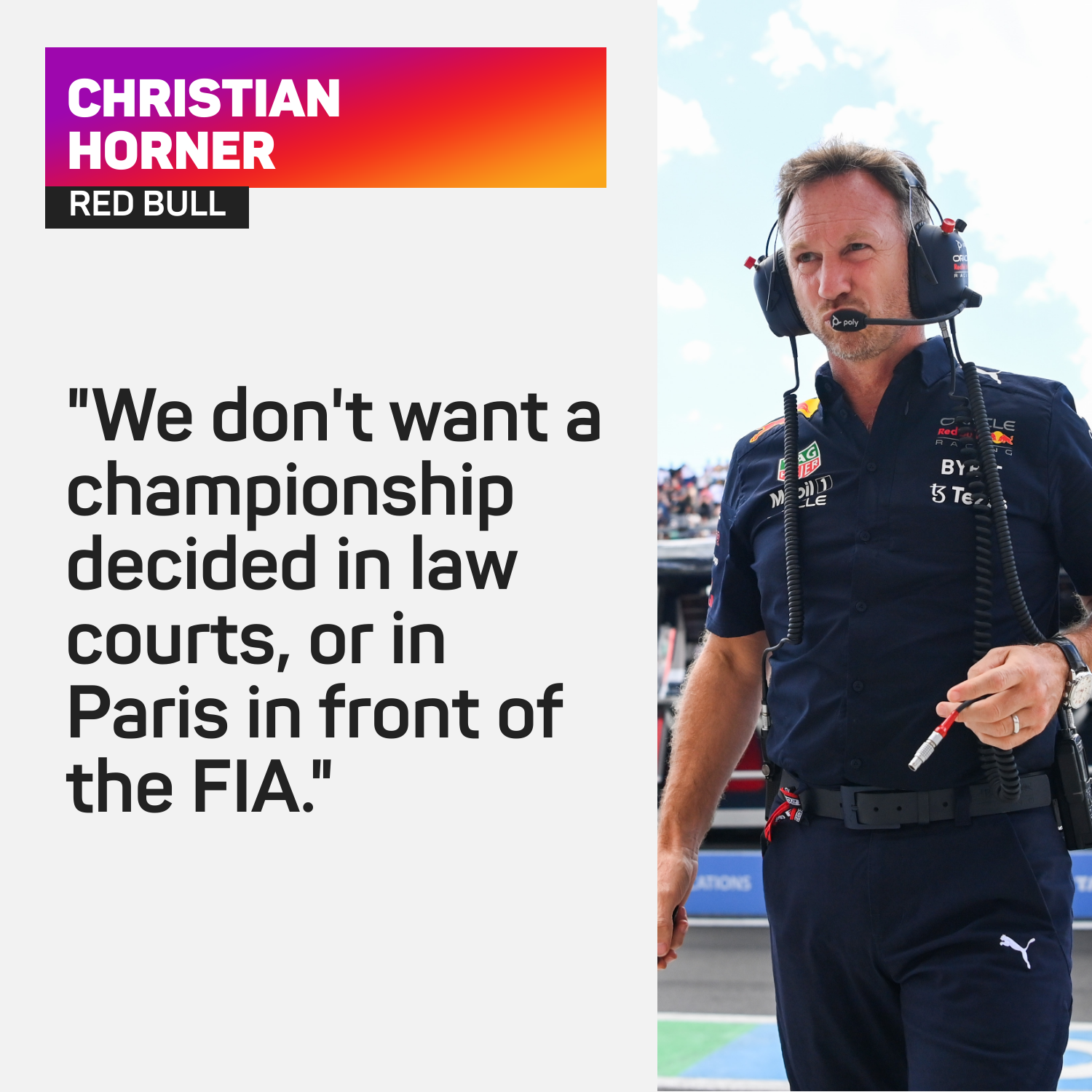 "There's probably about 50 per cent of the teams who are going to breach the cap at the end of the year if it continues the way things are. Probably even more.

"We don't want a championship decided in law courts, or in Paris in front of the FIA. We've got six months of the year to address this, we need to act now."

Horner also warned that failure to address the issue could result in the loss of hundreds of jobs within Formula One, while it may also lead to the budget cap being scrapped further down the line.

"I think the top teams would have to get rid of circa two, three hundred people each, to get anywhere near addressing it. Is that right?" He added.

"The problem is if the cost cap fails badly, it'll be gone forever.

Red Bull currently lead both championships, with Max Verstappen ahead of team-mate Sergio Perez by 46 points in the drivers' championship, while Red Bull holds a 76-point lead over Ferrari in the constructors' championship.

Back on his favourite circuit, Lewis Hamilton offered promise of finally getting off the mark with his first win of the 2022 season.

Lewis Hamilton says neither Bernie Ecclestone nor Nelson Piquet should be given a platform to express their views.

Lewis Hamilton discussed the political situation in the United States and the United Kingdom ahead of the British Grand Prix.

Ecclestone says he would 'take a bullet' for 'first-class' Putin

Former F1 boss Bernie Ecclestone has compared Vladimir Putin to a businessman, such as himself, who has "made mistakes."

A number of regulation changes in Formula One have been announced ahead of the British Grand Prix at Silverstone.

Juri Vips has retained his seat with Hitech Grand Prix despite being axed by Red Bull, leading to surprise from Formula 2.

Three-time world champion Nelson Piquet says there was no racial intent to his remarks but has apologised to Lewis Hamilton nevertheless.