West Indies had dominated the opening T20 on Saturday, but South Africa hit back 24 hours later to draw level.

South Africa levelled the five-match Twenty20 series against West Indies at 1-1 as spin played a key role in clinching a 16-run win in Grenada on Sunday.

The Proteas appeared to have failed to capitalise on a strong start with the bat when posting 166-7, only slightly above the total they had been unable to defend in the opening game 24 hours earlier.

West Indies had cruised to an eight-wicket victory on Saturday, but this time around they were bamboozled by South Africa's slow bowlers, George Linde (2-19) and Tabraiz Shamsi (1-16) taking 3-35 from their eight overs combined.

Fabian Allen's late onslaught – the all-rounder smashed 34 off just 12 deliveries – kept his team in with a slender chance, but even three sixes off Lungi Ngidi (1-49) in the 20th over were not enough. The innings finished at 150-9, in the process ending West Indies' two-match winning run in the format. 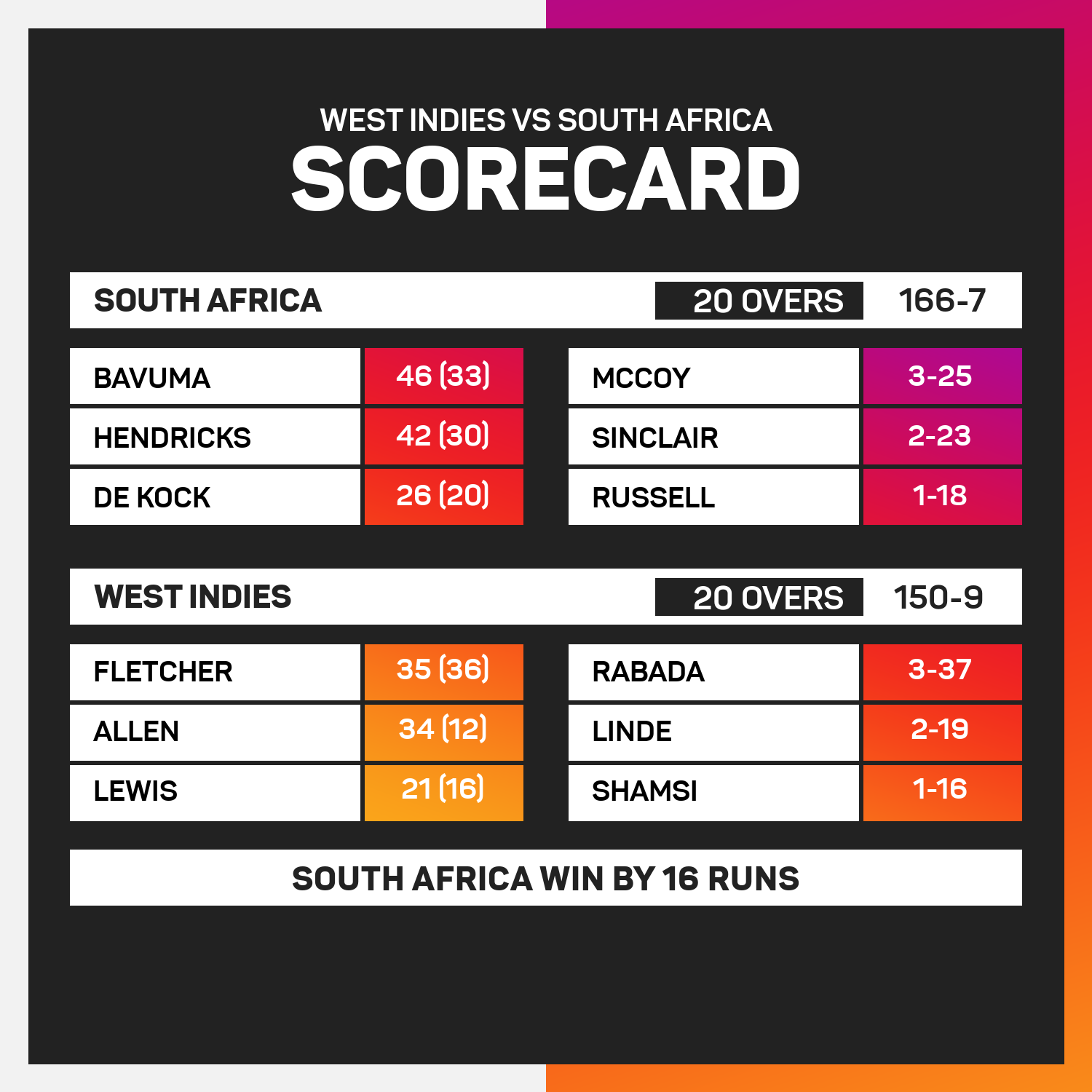 South Africa had appeared on course to set a more challenging target when openers Reeza Hendricks and Quinton de Kock (26) put on 73, the stand coming to an end when the latter fell to Kevin Sinclair (2-23).

Captain Temba Bavuma (46) continued the good work of the first-wicket pairing as the tourists reached the midway stage on 95-1, yet they lost their way in the second half of the innings.

The miserly Sinclair accounted for Hendricks, who made 42, and the promise of a late push was curtailed by regular wickets, the Proteas slipping from 122-3 as Obed McCoy (3-25) excelled with the ball at the death.

Left-arm seamer McCoy returned his best T20 figures in international cricket, aided by going for just three runs in the 20th over. His back-of-the-hand slower ball accounted for both Heinrich Klaasen and Linde as South Africa slumped down the stretch, albeit the stuttering finish did not cost them in the end.

Andre Fletcher did make 35, but the opener used up 36 deliveries in the process of top scoring for West Indies. In contrast, Allen rushed along at a stunning strike-rate of 283.33 runs per 100 balls. His late cameo included five sixes but Ngidi got him in the end, trapped lbw by a yorker from the penultimate ball.