Osaka glad to be back, hopes tears are in her past as Japanese star sets out 2022 goals

Naomi Osaka returned to WTA Tour action with a win in Melbourne, on the court where she won the Australian Open title last year.

Naomi Osaka marked her return to tennis with a hard-fought win in Melbourne and declared her love for competing had been reignited during a break from the sport.

The former world number one beat French player Alize Cornet 6-4 3-6 6-3 on Tuesday, in her first match since a third-round US Open defeat to eventual runner-up Leylah Fernandez.

The Japanese star said after that Flushing Meadows loss in September that she would put her tennis career on hold indefinitely.

Across several months, Osaka has adjusted her personal and professional priorities, pointing to the joy of San Francisco sleepovers with friends and reconnecting with normal life.

She believes there is a way to focus on the joy of competing, rather than the strains of performing in the public eye that caused her so much consternation last season, and there were glimpses of Osaka's best in the win over world number 61 Cornet at the WTA 250 Melbourne Summer Set 1 tournament.

Osaka pulled out of the 2021 French Open after one match and then elected not to play Wimbledon, as she addressed the importance of protecting her mental health.

She was reluctant to take part in media conferences, finding them harrowing at times, but on Tuesday the 24-year-old embraced the stage and explained how she had surprised herself by coming back to the court so soon.

"I actually really thought I wasn't going to play for most of this year," Osaka said. "I'm really happy with myself that I love the sport that much because I literally said that I was unsure when I was going to play after the US Open and I'm here right now.

"In the break I was feeling like I didn't know what my future was going to be. I'm pretty sure a lot of people can relate to that. Of course, you never know what the future holds, but it was definitely an indecisive time. But I'm really happy to be sitting here right now." 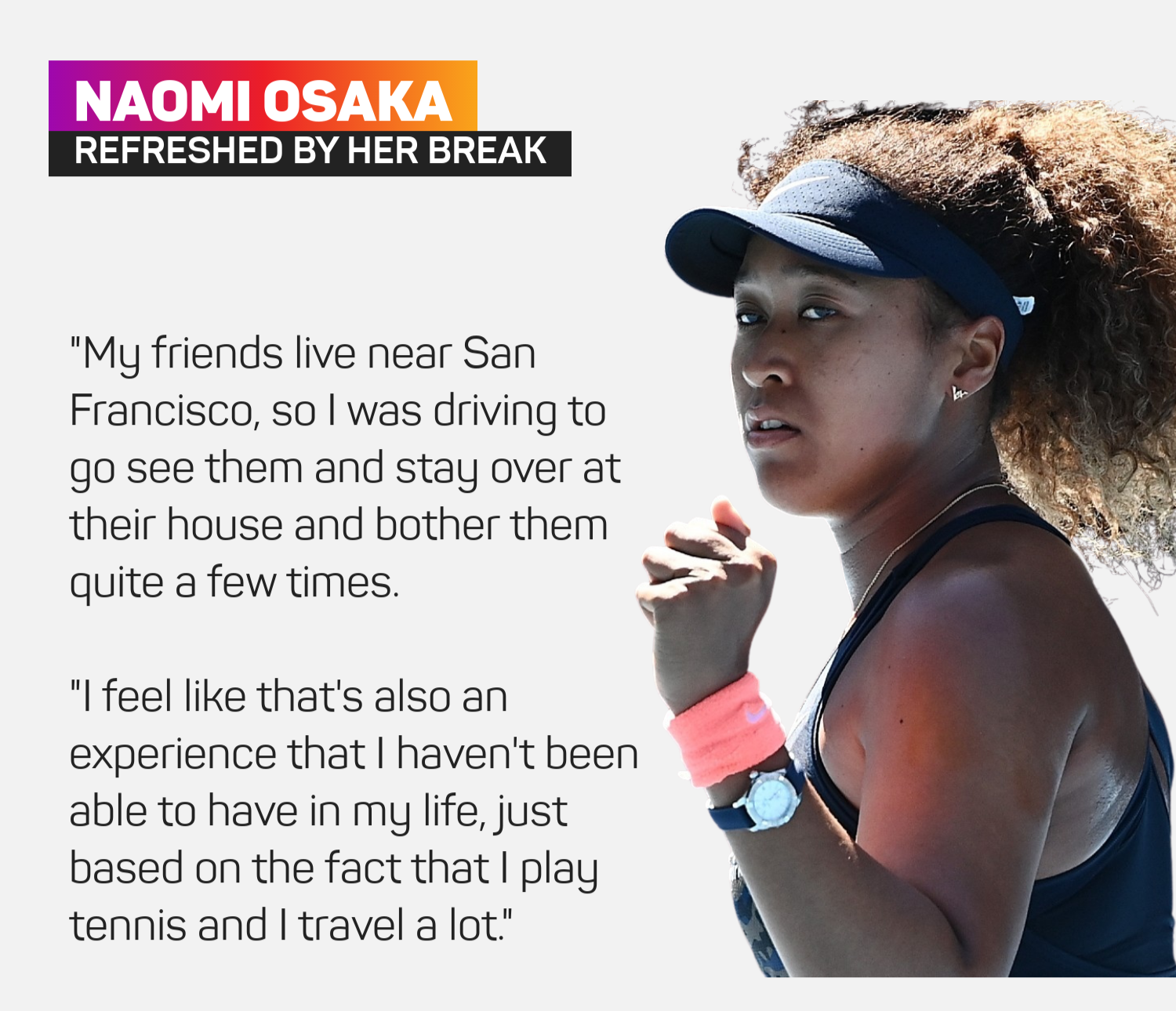 Osaka had envisaged a spell of globe-trotting – without a tennis racquet in her luggage – but the pandemic left her wary of following that route.

In the end, she settled on enjoying a quiet life for a while, saying: "I kind of stayed at home. My friends live near San Francisco, so I was driving to go see them and stay over at their house and bother them quite a few times.

"For me, I just want to feel like every time I step on the court I'm having fun," she said. "I can walk off the court knowing that even if I lost, I tried as hard as I could. Also, I have a goal in the press room, that I'm never going to cry again, so hopefully that works out in my favour.

"I'm the type of person that cared a little bit too much about the results and the ranking and stuff like that, and I just need to find a way to enjoy the game again. Because that's the reason why I was playing in the first place."

Osaka: “Shout out to my team. I really love them. They’re like my family. Of course I took time off and they told me to let them know when I was ready. When I got bored enough at home I texted them and told them I would love to play again if you guys don’t dislike me too much."

Quoted on the WTA website, Osaka said opening up to others about the tribulations of life on the circuit helped her to adjust her goals.

"During the off-season I just hung out with my friends and talked to my family a lot. I felt like that was a way of decompressing the pressure I had on myself. Then I just slowly started to regain the feeling of love that I had towards the game," she said. "It's not like it ever completely went away, but I felt like it got overshadowed by a lot of emotions that I was feeling just by constantly playing year after year. Sometimes it's just good to remember why you're playing and stuff."

Top seed Osaka's win came on Rod Laver Arena, the main show court at the Melbourne Park complex that will stage the Australian Open later this month, when Osaka will be defending her title. Fellow seeds Liudmila Samsonova, Bernarda Pera and Alison Riske were beaten.

At the concurrent Melbourne Summer Set 2 event, American top seed Jessica Pegula was ousted in the first round by Romanian Irina-Camelia Begu, losing 7-6 (8-6) 6-3.

The Adelaide International 1 event contains the strongest field this week, and Tuesday saw straight-sets wins for Coco Gauff and a pair of 2020 grand slam winners in Iga Swiatek and Sofia Kenin.

At two sets down, Daniil Medvedev asked himself one question – "what would Novak do?".

A straight-sets win over Jannik Sinner launched Stefanos Tsitsipas into the semi-finals of the Australian Open as he defied his injury woes.

Australian Open: Cornet 'felt out of breath all the time' in Collins loss

Danielle Collins never allowed Alize Cornet to settle in the quarter-finals of the Australian Open.

Iga Swiatek needed three hours to get past Kaia Kanepi in a quarter-final battle at the Australian Open.

Michael Venus labelled Nick Kyrgios an "absolute k***" after their meeting at the Australian Open.

Danielle Collins was too strong for Alize Cornet, reaching the Australian Open semi-finals for a second time.

Rafael Nadal, into the Australian Open semi-finals for just the third time since 2016, nearly opted against competing in Melbourne