There were raucous celebrations in Milwaukee on Wednesday as the Bucks ended a 50-year NBA title drought.

The Bucks clinched their first championship since 1971 with a 105-98 Game 6 victory over the Phoenix Suns.

While there was ecstasy for the Bucks, it was agony for the Suns, who let a 2-0 Finals lead and the chance to win the title for the first time slip through their fingers.

They were undone by arguably the premier player in the NBA, with two-time MVP Giannis Antetokounmpo reaching what now stands as the zenith of his career to date with a Finals performance that ranks among the best of all time.

Antetokounmpo rose to the occasion in the most emphatic fashion and a closer examination of his dominance in the Finals is the only place to start in Stats Perform's look at who thrived on the grandest stage and who shrunk under the spotlight in the final edition of Heat Check for the 2020-21 season.

Though the depth the Bucks have assembled helped them survive Antetokounmpo's knee injury and get past the Atlanta Hawks in the Eastern Conference Finals, it was the performance of the Greek Freak that was always going to determine the destination of the title.

And when it mattered most, Antetokounmpo - fittingly for a man of his tremendous stature - reached heights few can match in putting together a Finals display for the ages.

In the first three rounds of the postseason, Antetokounmpo averaged 28.2 points per game, a slight improvement on his 28.1 ppg in the regular season despite the injury that forced him to miss the final two games of the Hawks series.

He upped the ante substantially in the Finals, though, racking up 35.17 points per game in a series he capped with a stunning 50-point effort to seal a historic crown for Milwaukee.

In ending Milwaukee's half-century wait, Antetokounmpo wrote his name into several pages of the record books.

He joined LeBron James (2015) as the second player to average at least 35 points, 10 rebounds and five assists in a Finals series and followed in the footsteps of Shaquille O'Neal (2000) by recording three games with 40 plus points and 10 plus rebounds in a Finals series.

Antetokounmpo finished the Finals with a field goal percentage (61.8), surpassing O'Neal for the best shooting performance ever from the field in a Finals series.

When the pressure was at its highest, no player was hotter than Antetokounmpo. 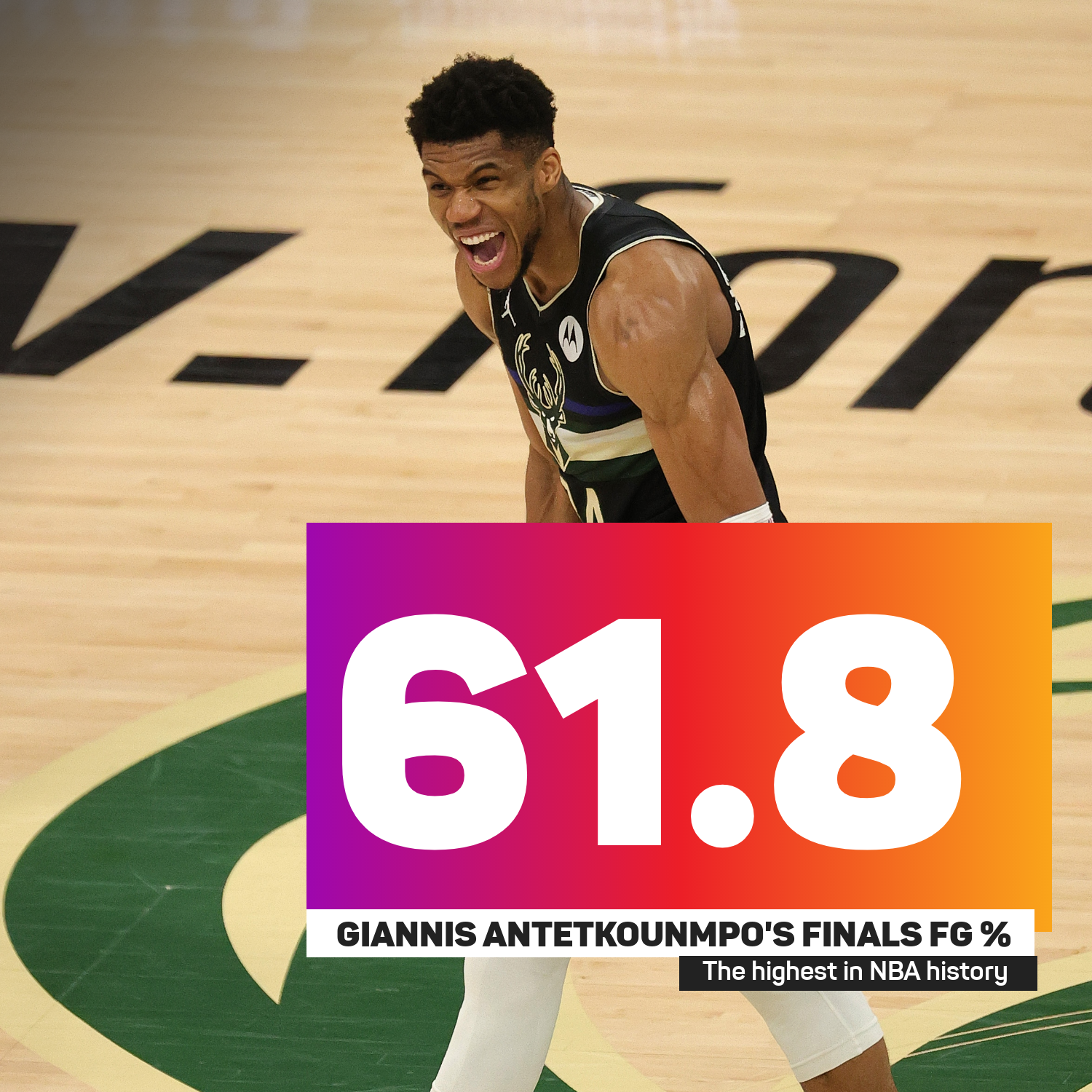 For all the heroics of Antetokounmpo, the Finals was not a one-man show.

Indeed, Antetokounmpo received his fair share of help. The Bucks scored 528 points with his key supporting actors, Khris Middleton and Jrue Holiday, on the court together.

But beyond that pair there were a number of lesser heralded performances, not least from shooting guard Connaughton.

He upped his points per game average from 6.06 in the first three rounds to 9.17 in the Finals. Connaughton also improved in rebounds per game (5.83) having posted 3.88 in the opening three series and made a significant impact from beyond the arc.

Connaughton averaged 2.5 made threes per game in the Finals and trailed only Jae Crowder and Middleton (both 2.67) in that regard.

If he can maintain that level of performance next season, Connaughton will again be a key role player as the Bucks try to defend their crown.

Though he was heartbreakingly denied the first NBA title of a Hall of Fame career, Paul can look back on his performance in the postseason and in the Finals with pride.

Only Antetokounmpo improved his points per game average from the opening three rounds of the postseason by a greater margin in the Finals.

Paul put up 18.07 per game as the Suns saw off the Los Angeles Lakers, Denver Nuggets and Los Angeles Clippers.

That average leaped to 21.83 in the Finals, while he also made strides as a deep shooter by converting two threes per game, up from 1.21 in the first three rounds.

Paul may look to the fact he had a negative plus-minus in each of the Suns' four losses as evidence of him not performing to a high enough standard.

Yet the reality is nobody did more to help the Suns' cause, but Antetokounmpo ensured his efforts were in vain.

One of the stars of the Suns' surge in the NBA bubble last season, Payne has proven an astute acquisition by Phoenix.

He had a significant impact on their success in the playoffs this term, averaging 10.06 points per game across the first three rounds and putting up 29 and nine assists in Game 2 of the Western Conference Finals against the Clippers.

But his influence waned in the Finals, which saw him average 7.33 points per game.

Only twice did Payne register double figures in the Finals, in which he scored 44 points in over 93 minutes on the court, finishing with a plus-minus of -21.

Having played a sizeable role off the bench in the Suns getting to the Finals, Payne was arguably more of a hindrance when it came to the season-ending showpiece.

Booker was outstanding throughout the postseason for the Suns but he dropped off in two aspects of his game in the Finals.

The Suns were beaten consistently on the boards by the Bucks, who averaged 46.3 rebounds per game to Phoenix's 39.

And part of that disparity was Booker's decline on the glass.

He had put up 6.44 rebounds per game in the first three rounds but saw that tally dip to 3.5 in the Finals.

Additionally, Booker faded as a force beyond the arc, making 1.83 threes per game in the Finals, down from 2.06 in the rest of the playoffs.

Booker has established himself as a bonafide star, but he may spend the offseason examining how he can avoid that kind of decline should he get another shot in the Finals. 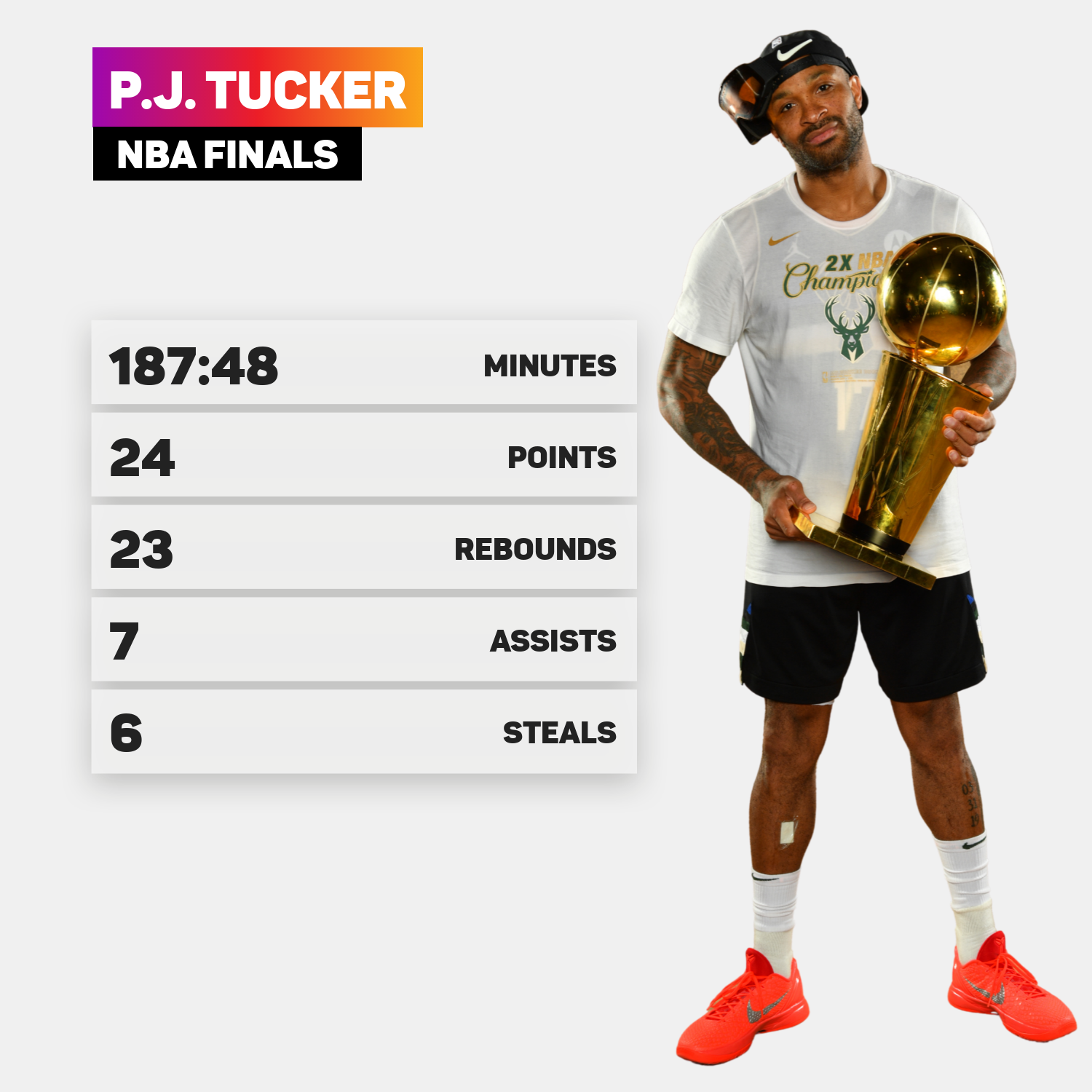 He is unlikely to care given the Bucks emerged victorious, but Tucker's numbers from the Finals do not make for pretty reading.

His rebounds per game average tailed off from 5.18 in the rest of the playoffs to 3.83 in the Finals, while he scored only 24 points in nearly 188 minutes of play.

Tucker had two games where he did not score a point, the second of those coming in Game 6.

However, his plus-minus in the decisive encounter was +13, with Tucker serving as proof that raw numbers are not always the best measure of a player's performance.