NBA Finals: Tatum states 'I have to be better' as Curry-inspired Warriors take down Celtics in Game 4

The Celtics went down to the Warriors on home court in Game 4 of the NBA Finals and Jayson Tatum says he and the team must do better.

Jayson Tatum simply stated "I've got to be better" after the Boston Celtics were downed by a Stephen Curry-inspired Golden State Warriors in Game 4 of the NBA Finals.

Curry put in a Finals performance for the ages at TD Garden, scoring 43 points as the Warriors levelled the best-of-seven series at 2-2 with a 107-97 triumph.

It could have been different with the Celtics holding a four-point buffer prior to Curry – playing with a left-foot injury – making a couple of fourth-quarter baskets as part of 10-0 run that swung the momentum.

Tatum had 23 points and 11 rebounds but he made just one basket when playing in the entire fourth quarter, with the Celtics draining only two shots in the final seven minutes, the Warriors outscoring the hosts 21-6 in that time.

Speaking after the game, Tatum said: "I mean, you've got to give them credit, they're a great team, they're playing well.

"But it's on me, I've got to be better. I know I'm impacting the game in other ways, but I've got to be more efficient – shoot the ball better, finish at the rim better.

"I take accountability for that, and I just look forward to Monday, and leave this one behind us.

"We'll learn from it, watching film and things like that, but everybody probably feels like they've got to do better, myself included. [We'll] just go get it on Monday." 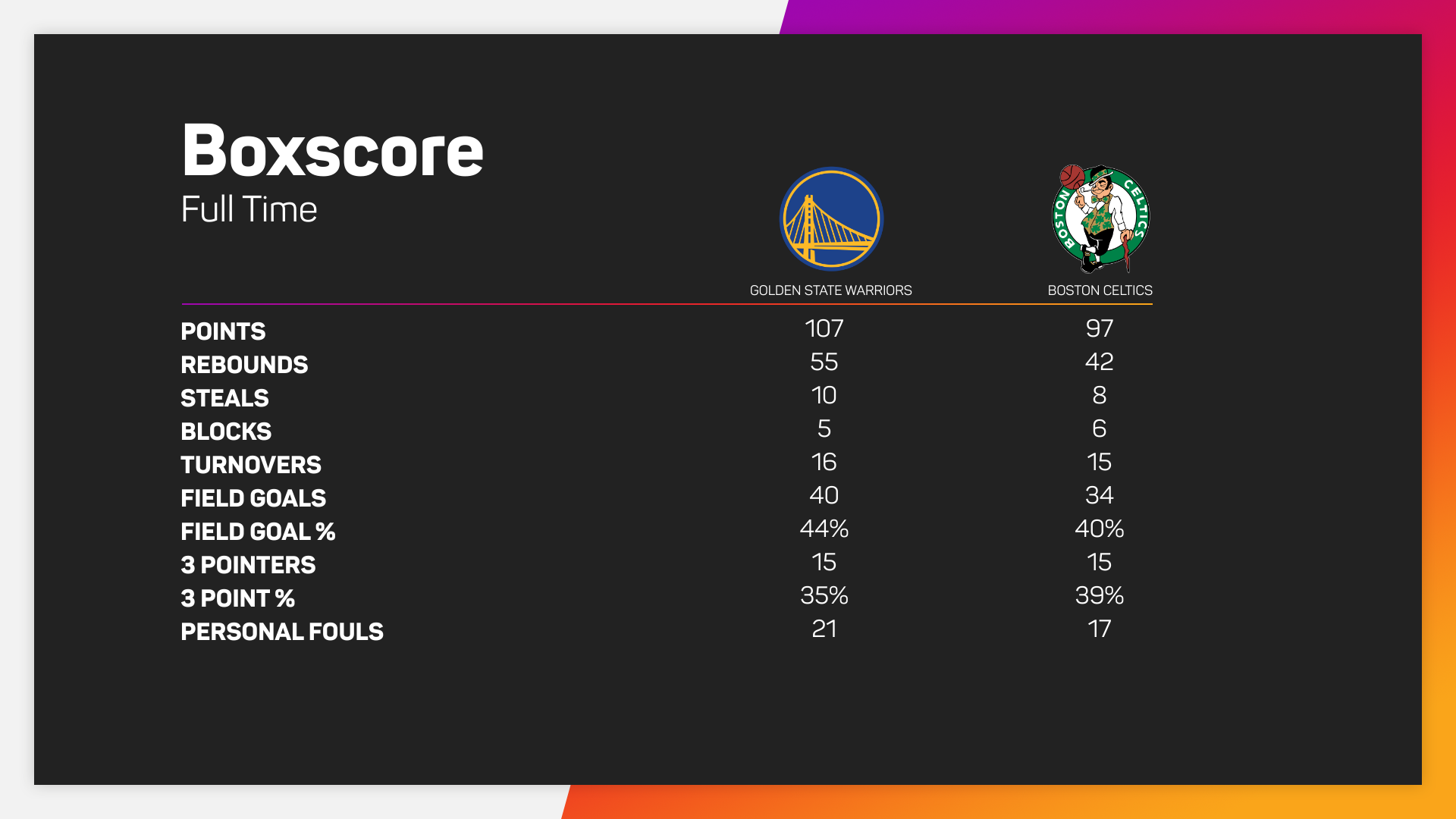 "That's the balance of being aggressive and picking your spots, and doing what he's done in previous games which is kicked it out and got guys wide-open looks.

"That's an ongoing theme, so to speak, him getting to the basket and being a scorer as well as a playmaker, and they do a good job with their rotations.

"But sometimes he's hunting fouls instead of going to finish, I've seen that in a few games so far."

Curry's tally of 43 was the second highest he has posted in a Finals game, and Udoka conceded there were some plays his team could do little to defend against.

"Obviously we're focused on him, and keeping others in check, but some of those were some crazy shots that were highly contested that he made," Udoka added.

"You look at the overall numbers, the attempts, getting those off is the number we don't like – the 14 [three-point] attempts in general – he came out bombing early, he had nine in the first half.

"Some of the threes he hit were highly contested, and you can't do anything about those, but when we did switch, it kind of got some cross-matches on guys on the rim, and he went after them a little bit later and made some plays."

The series heads back to San Francisco for Game 5 on Monday.

Chet Holmgren revealed discussions with Josh Giddey took place before he was selected second by the Oklahoma City Thunder in the NBA Draft.

Paolo Banchero was the surprise number one pick by the Orlando Magic at Thursday's NBA Draft, leaving Jabari Smith to go to the Rockets.

There will be some familiar names on the Lakers' Summer League roster, with the sons of Shaquille O'Neal and Scottie Pippen signed up.

A fascinating NBA Draft produced some chaotic scenes on Thursday, but who came out on top and who looked flustered in the mayhem?

An eventful NBA Draft night saw an interesting deal between the 76ers and the Grizzlies, with Danny Green and De'Anthony Melton both moving.

Front offices continued to their pivot towards skill and defensive flexibility, as Paolo Banchero was taken first in Thursday's NBA Draft.

The Orlando Magic left it late and selected Paolo Banchero with the first pick in the NBA Draft on Thursday.