The Milwaukee Bucks can clinch a first NBA title since 1971 with victory over the Phoenix Suns in Game 6 of the Finals on Tuesday, with Giannis Antetokounmpo preaching the importance of a team-first approach and staying in the moment.

Having fallen 2-0 behind in the series with back-to-back defeats in Phoenix, the Bucks are on the cusp of glory having reeled off three successive wins.

Milwaukee clinched a dramatic Game 5 triumph in Phoenix on Saturday, Jrue Holiday combining with Antetokounmpo for the defining play late in the fourth quarter as he stole the ball from Devin Booker and then lofted a pass for the two-time MVP to send down a thunderous dunk.

That has set the stage for the Bucks to end their 50-year wait in front of their home fans, but Antetokounmpo is not focusing on the potential celebrations should the Bucks close out the series.

"It's going to be amazing. Hopefully we can focus what we got to do and be in the present, compete as much as possible, play good basketball and be the team that wins at the end," said Antetokounmpo

"Hopefully we can enjoy it with our family and with the fans and they can enjoy it also. I feel like it's something that you can feel the excitement in the city. The last time we were in the NBA Finals was 1974.

"As I said, play good basketball, compete as hard as possible and put ourselves in a position to be able to win that game. That's all can you ask for. Hopefully we win.

"If we win, great. If we don't, we have one more chance. But if we win, it would be nice to celebrate with the fans inside and outside and with our families, because this is something historical that is happening in the city right now."

While Antetokounmpo is averaging a double-double in the series with 32.2 points and 13 rebounds, Holiday and Khris Middleton have each played a pivotal role for the Bucks.

The Bucks have scored 344 points in the Finals when that trio have been on the court, with images of Antetokounmpo leaning on Holiday or Middleton a frequent feature of this series. 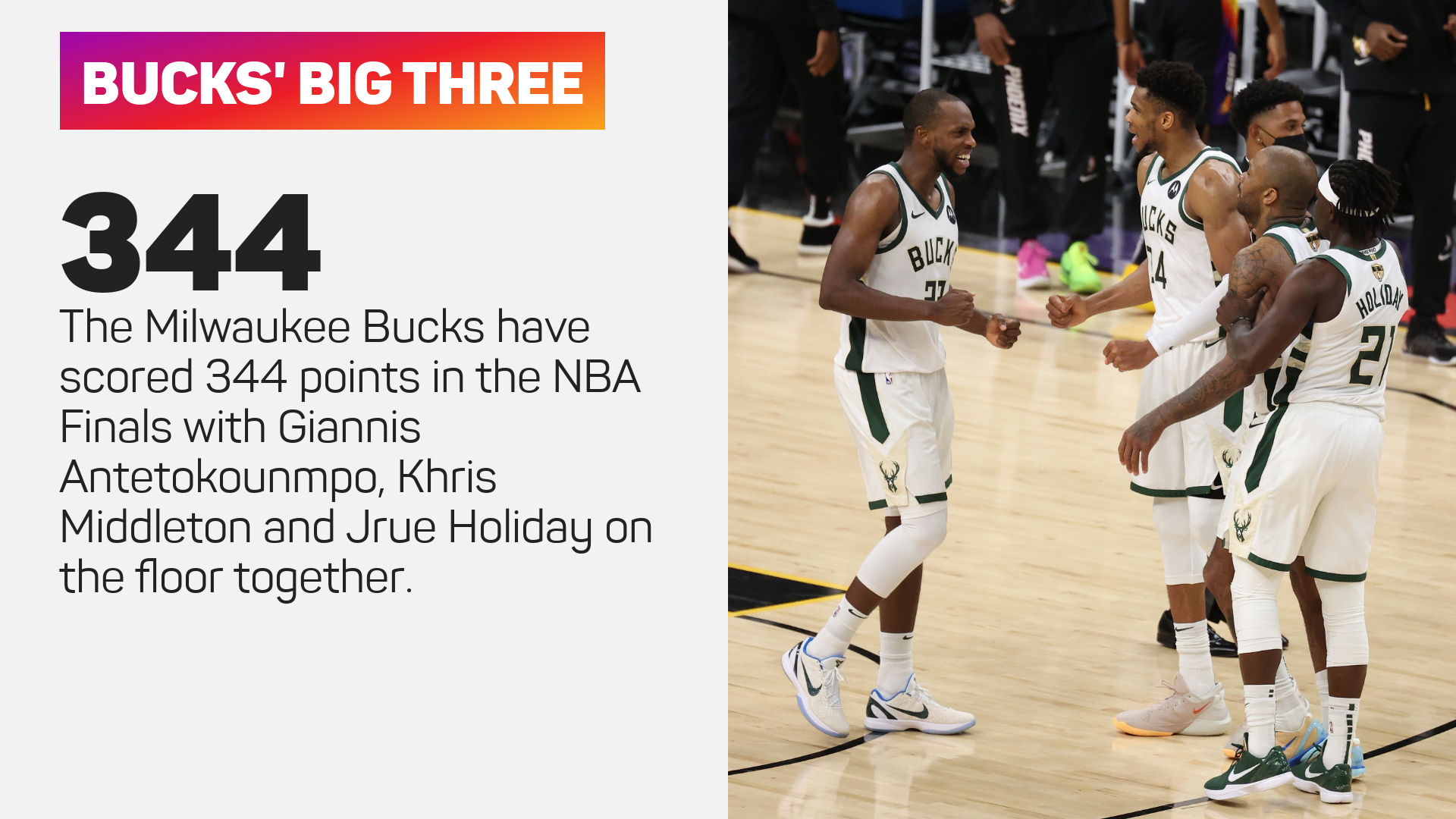 Asked if he has improved at making it a "we not me" journey, Antetokounmpo replied: "Have to. Everybody is a part of this process. I don't think there's been anybody that has gone through this process by himself and go all the way and win the NBA championship.

"I'm tired. I look next to me, Khris is tired and Jrue is tired or whatever the case might be. It's like they're my brothers. That's when you want to hug them, put your arm around them and, like, we got this, we got this together, we got to keep doing this together until the end."

All the focus will be on Antetokounmpo but, as he proved in Game 5, Holiday is just as key to the Bucks' hopes.

He is averaging a series-high nine assists per game in the Finals, and his influence on Antetokounmpo is clear.

Antetokounmpo is averaging 41.1 points per 100 possessions with Holiday on the court in the Finals, compared to 38.2 when he is off the floor.

The Finals' top facilitator and top scorer must each be at their best to ensure the Bucks are celebrating come the final buzzer.

Paul had a double-double in Game 5 with 21 points and 11 assists, but there is evidence to suggest his influence has waned over the course of the series.

He had a plus/minus of -6 on Saturday, the third consecutive game he has finished in the negative column in that regard.

If the Suns are to keep their hopes of a first title alive, they may need a repeat of his 32-point showing from Game 1.