NBA Finals: Curry to 'keep on shooting' as Green warns Celtics they will face 'livid' team-mate

The Golden State Warriors beat the Boston Celtics despite Stephen Curry's below-par showing, but he is confident of responding in style.

Stephen Curry has vowed to "keep shooting" in Game 6 after his all-time streak of 233 successive games with a 3-pointer came to an end against the Boston Celtics.

The Golden State Warriors beat the Celtics 104-94 at Chase Center on Monday to take a 3-2 lead in the best-of-seven NBA Finals series.

Curry has played a huge part in the Warriors' drive for a seventh championship, but the 34-year-old endured an off day in Game 5 as he went 0-for-9 from three-point range.

He had 16 points overall and laid on eight assists in what was a below-par showing, with Andrew Wiggins and Klay Thompson stepping up to help secure the pivotal victory.

Historically, when a seven-game series is tied at 2-2, the winner of Game 5 has gone on to win the series over 82 per cent of the time.

Curry, who scored 43 points in the Game 4 triumph in Boston, is confident he will respond in the best way possible in Thursday's Game 6.

"I'll keep on shooting. It's very simple," he said. "I'm not afraid to go 0-for-whatever because I'm going to keep shooting and taking shots that you normally feel like you can make.

"And I've responded well when I've had games like that from the three-point line. But I don't think I've ever been happier after a 0-for-whatever type of night.

"Knowing the context of the game, the other ways you tried to impact the game and the fact that you had four guys step up in meaningful ways to help us win offensively.

"So all that stuff matters. Yeah, there's a fire burning and I want to make shots, but the rest of it is about how we win the game, and we did that." 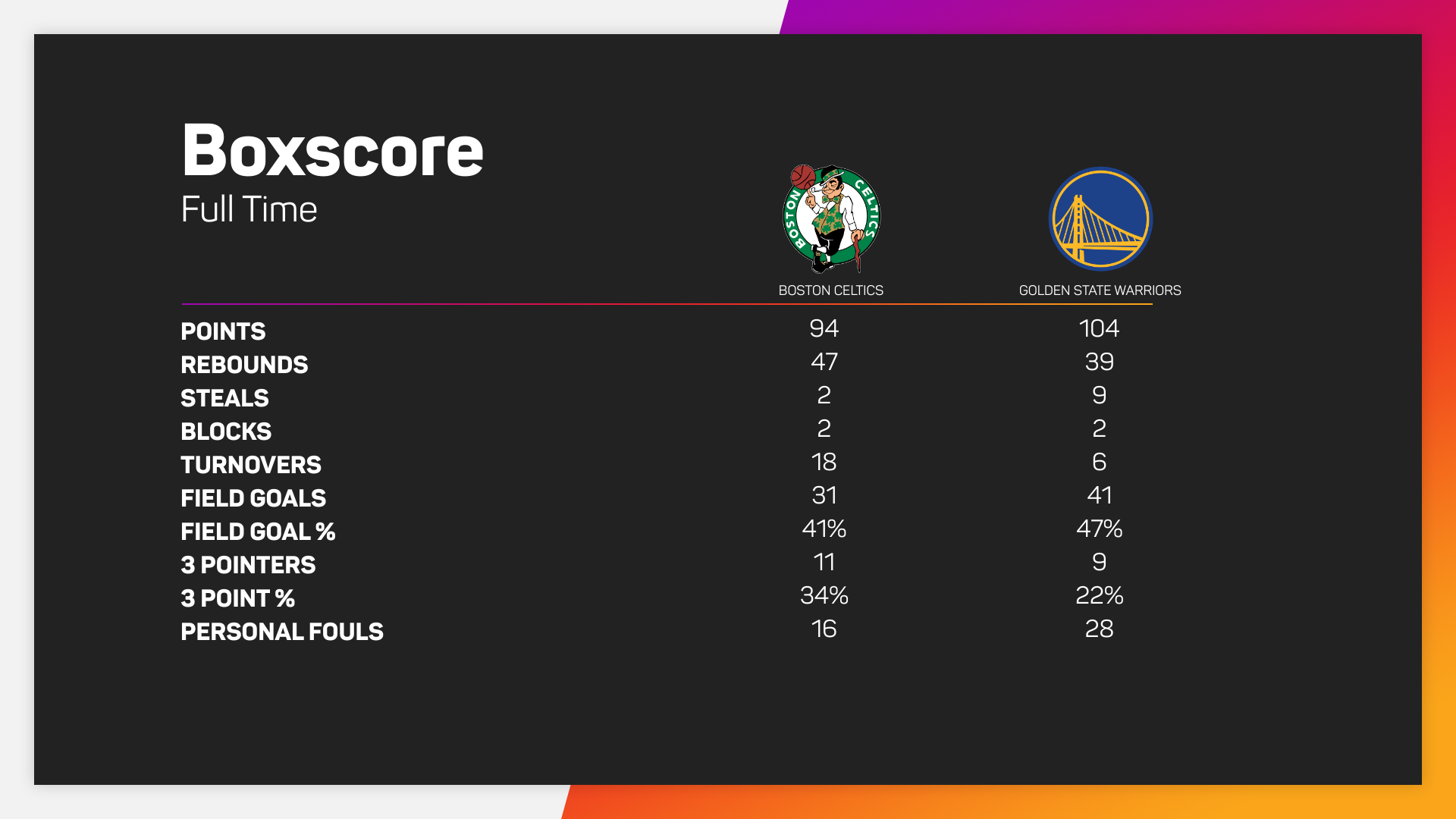 And after digging deep as a team to pick up the win, Draymond Green believes team-mate Curry's off-day could work in the Warriors' favour when the teams reconvene.

"Obviously, we have spoken about helping him, and I don't think he's been out there helpless, like that's the narrative.

"But everybody's doing their part, and tonight, a night that he didn't have it going, we found offense elsewhere, and that's kind of what it's been.

"On the same token, if he's got it going, we're going to be heavy Steph Curry. That's just what it is.

"The whole notion of this guy doesn't have help, well, you've got 43, he's going to keep shooting, and we're going to do all that we can to get him shooting it.

Chet Holmgren revealed discussions with Josh Giddey took place before he was selected second by the Oklahoma City Thunder in the NBA Draft.

Paolo Banchero was the surprise number one pick by the Orlando Magic at Thursday's NBA Draft, leaving Jabari Smith to go to the Rockets.

There will be some familiar names on the Lakers' Summer League roster, with the sons of Shaquille O'Neal and Scottie Pippen signed up.

A fascinating NBA Draft produced some chaotic scenes on Thursday, but who came out on top and who looked flustered in the mayhem?

An eventful NBA Draft night saw an interesting deal between the 76ers and the Grizzlies, with Danny Green and De'Anthony Melton both moving.

Front offices continued to their pivot towards skill and defensive flexibility, as Paolo Banchero was taken first in Thursday's NBA Draft.

The Orlando Magic left it late and selected Paolo Banchero with the first pick in the NBA Draft on Thursday.

Cavendish and Alaphilippe miss out on Tour de France selection

Daniil Medvedev and Andrey Rublev are among those to miss Wimbledon due to the ban on Russian and Belarusian athletes.