Luka Doncic and Joel Embiid must battle a host of former MVPs for the top individual award in the coming NBA season.

The NBA and its leading stars will hope the coming regular season is exactly that: regular.

The past two have not been. In 2019-20, the season was paused for the coronavirus pandemic and resumed in Orlando, in a bubble and without crowds.

Giannis Antetokounmpo was at least able to put forward his claims for a second straight MVP honour prior to that point.

In 2020-21, a rapid turnaround from the playoffs appeared to catch some leading men out, before the brutal 72-game December-to-May calendar saw a number of top performers face spells on the sidelines.

As a result, Nikola Jokic was the clear MVP candidate, outstanding for the Denver Nuggets but crucially also one of just 11 players across the league to play in all 72 games. His 2,488 minutes trailed only New York Knicks pair Julius Randle (2,667) and RJ Barrett (2,511).

With a proper preseason to plan – and the Nuggets hurt by Jamal Murray's injury – it seems unlikely Jokic will defend his title.

But which players are most likely to follow his lead and move clear of the rest in the coming months? Stats Perform breaks down the chances of the MVP favourites.

Having claimed back-to-back MVP Awards, Antetokounmpo entered preseason last year as the favourite again and threatened for a time to contend, averaging 28.1 points, 11.0 rebounds, 1.2 blocks and 1.2 steals per game. A six-game lay-off in April, immediately after scoring 47 points in Portland, put paid to those hopes.

However, it would have been tough for voters to justify again picking Antetokounmpo regardless. At that stage, he had won only three playoff series in his entire career. By contrast, Bill Russell, Wilt Chamberlain and Larry Bird – the three men previously honoured three years in a row – each celebrated at least one championship across the first two seasons of their respective runs.

It is very different now, though. Although Antetokounmpo would become only the ninth player to take the Maurice Podoloff Trophy on three occasions, there is less daunting historical precedent with the lean year in between. Crucially, too, the 'Greek Freak' is now himself a champion. 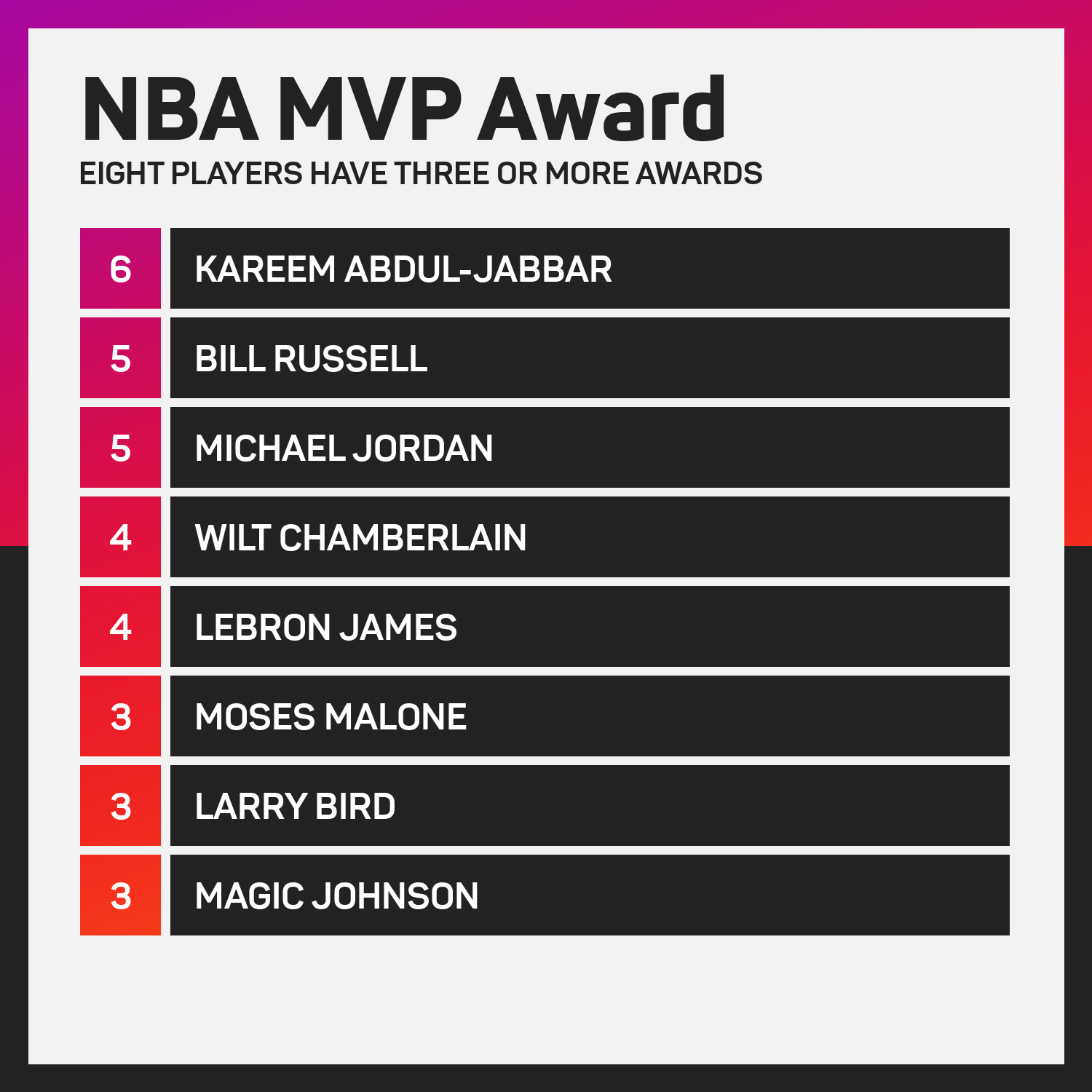 Antetokounmpo was the Milwaukee Bucks' Finals MVP as they won their first title in 50 years. Rather than regress in the playoffs – his points average had dipped from the regular season in four of his five prior postseason campaigns – the 26-year-old forward scaled new heights, taking more responsibility with a career-high 20.9 field goal attempts per game and being rewarded with 30.2 points.

Now embracing his strengths, taking only 3.3 shots from three-point range in the postseason and shooting 73.6 per cent at the rim, Antetokounmpo should have the confidence to kick on again.

It is Doncic, not Antetokounmpo, who has been installed as the early favourite this year. The Slovenian is only entering his fourth season, but it feels about time he truly established himself as a future great.

Doncic was one of those who acknowledged he was "not in my best shape" as the 2020-21 season promptly got under way, and the Dallas Mavericks were an underwhelming 8-12 at the end of January, although the point forward still averaged 27.4 points over that slow early period. He then weighed in with 30.3 points across 12 games in February.

Only four players bettered Doncic's 1,830 points come the end of the year, yet he could still be a little more consistent in pursuit of a regular-season award. The 22-year-old has set an astonishing standard on the biggest stage. While waiting on a first series win, his 33.5 playoff points are the most by any player to feature in at least 13 career games. Doncic's 143 points at the Tokyo Olympics led the tournament.

If Dallas can be competitive from the outset, Doncic's game is certainly a good fit for individual recognition, his 2020-21 usage rate of 36.0 per cent the highest among players with 500 or more possessions. Similarly dominant for Slovenia, his 57 assists and 196 minutes also topped the charts at the Olympics.

New coach Jason Kidd will ask "young Picasso" Doncic to share the ball around a little more this year, though, saying: "As a coach, I don't know if anybody told Picasso that he had to use all the paints. But I just want to remind Luka that he can rely on his team-mates, and his team-mates are going to be there to help him."

He added: "We know that it's easy to get the ball to Luka, but the one thing we do want to get accomplished is other guys as playmakers so come the fourth quarter Luka is fresh and is ready to deliver." Some more big moments – Luka's 93 clutch points ranked 21st last year – would certainly help Doncic's cause.

The Los Angeles Lakers' new 'big three' – we will come to the Brooklyn Nets shortly – is likely to help title hopes but hinder MVP bids. Russell Westbrook's relentless regular-season efforts, averaging 34.4 per cent usage over the past seven seasons, might take some of the shine away from LeBron James. Curry does not have that problem.

As last year, when he had the next-most first-place votes after Jokic (albeit just five to 91), the Golden State Warriors are set to be hugely reliant on Curry – at least until fellow Splash Brother Klay Thompson is back from injury.

In his first full season since Kevin Durant left and Thompson went down, Curry set his stall out early with 62 points against the Portland Trail Blazers but saved his best for the end of the year, averaging 36.9 points after a tailbone injury in March to take a second scoring title. The two-time MVP could not quite do enough to carry the Warriors through the play-in round.

A young supporting cast is now another year older, however, meaning Golden State should be competitive enough to keep Curry in the limelight without having enough talent to distract from his displays. 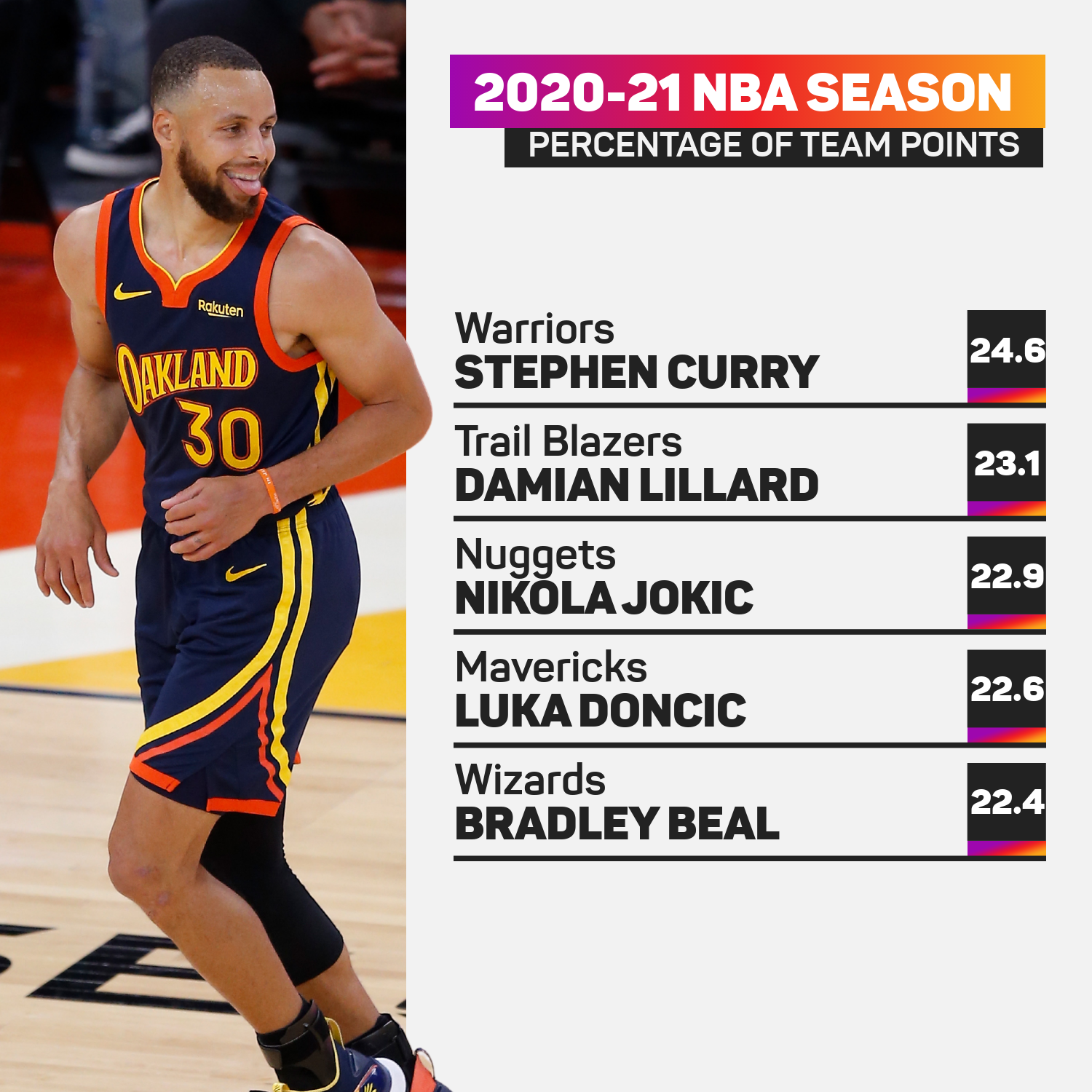 Durant, like James, was set to merely be the biggest star on a team of stars until the complications around Kyrie Irving's status arose. As it stands, Irving will not feature for the Nets due to his refusal to get a coronavirus vaccine that would allow him to play home games.

Of course, Brooklyn also have James Harden, who briefly flirted with the MVP picture last year prior to a hamstring injury, but Durant will be the team's go-to as long as he stays on the court.

The former Warrior is now another year on from his awful Achilles injury and gave an indication in the playoffs of the player he can still be. Playing in all 12 games, unlike Harden and Irving, Durant scored an outstanding 34.3 points – a league best among those to play 10 or more games. Only a borderline call on a Durant shot in Game 7 against the Bucks ended Brooklyn's campaign.

With or without Irving, the Nets are expected to contend for the title this time. Durant was Finals MVP in his two championship triumphs in 2017 and 2018 but has only a single regular season award, back in 2013-14. If he is back to his best, as would appear to be the case, the 33-year-old could dominate the coming season from start to finish.

Should, as this list suggests, voters look for players who are capable of putting their teams on their backs, Embiid's case has only got stronger.

The big man was already the Philadelphia 76ers' key performer, evidenced by their 39-12 record with him in the team last year compared to 10-11 when he was missing. Indeed, had Embiid not been absent for such a number of games, he might well have pipped Jokic to the top individual award. 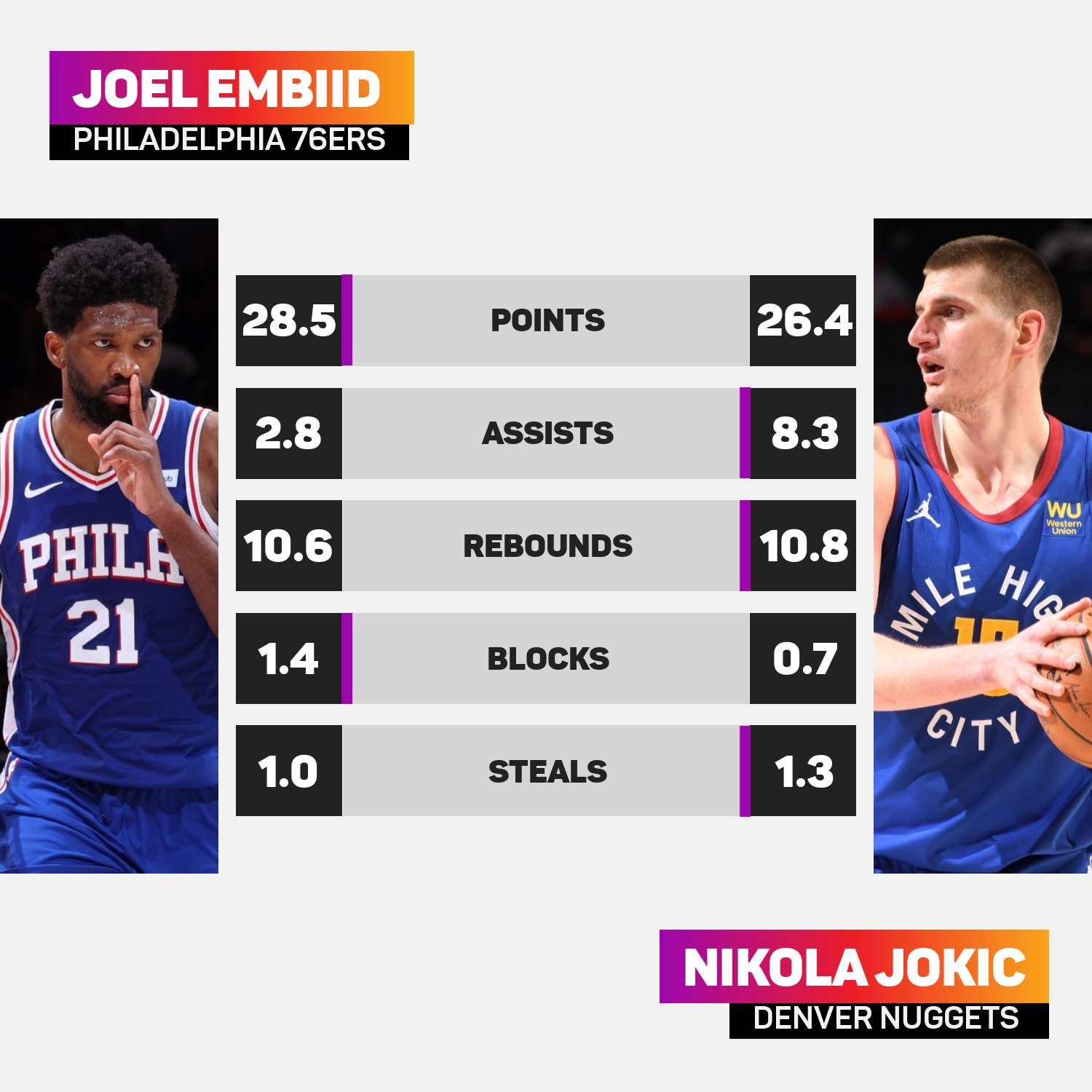 Ben Simmons, the Sixers' second man, was already underwhelming last year, and Embiid's responsibilities on both ends of the floor are set to increase due to the uncertainty surrounding his team-mate.

Even if Simmons sticks around, as is now a possibility, this is clearly Embiid's team. He felt it had not been previously, responding to reports Simmons was unhappy with the dynamic by saying: "I feel like our teams have always been built around his needs." Those claims were "disappointing" and "borderline kind of disrespectful", Embiid added.

He will certainly not be lacking motivation now to put his injury woes behind him, enjoy another outstanding season and claim the MVP award that evaded him last year.

Curry after Suns defeat Warriors: They're Western Conference champions for a reason

Two-time MVP Stephen Curry was muted by the Phoenix Suns' defence as the Golden State Warriors went down 104-96.

Devin Booker grabbed his left hamstring in the second quarter of Tuesday's win over the Golden State Warriors.

World number seven Bryson DeChambeau moved into the lead at the Hero World Challenge, but Collin Morikawa is in hot pursuit.

Lee Zii Jia should fancy his chances to reach the men's singles final of the BWF World Tour Finals after being drawn against Thailand’s Kunvalut Vitidsarn for Saturday's semi-finals.