Buttler blasted the Rajasthan Royals into their first Indian Premier League final for 14 years with a blistering unbeaten 106 off just 60 balls to secure a seven-wicket win over Royal Challengers Bangalore on Friday.

That took the 31-year-old to four centuries in this IPL campaign – as many as every other player combined – and five hundreds in total, just one shy of Chris Gayle's record of scoring six tons in the competition in his career.

Buttler will look to deliver again when the Royals face Gujarat Titans in the final in Ahmedabad on Sunday, and his form has led to questions whether he could make a return to England's Test side.

England dropped Buttler after the wicketkeeper-batsman averaged 15.3 during the most recent Ashes thrashing by Australia. He has scored only two centuries in 100 Test innings.

But the newly appointed McCullum – who faces home nation New Zealand in his first series in charge, starting on Thursday – can envisage Buttler taking his white-ball skills into red-ball cricket.

"Jos is one of those players you look at instantly and think: how could he be so dominant in one form of the game and not quite have found his feet, other than a few fleeting performances, in Test cricket?" McCullum said.

"There's no reason why, if you're good at T20, you can't bring those skills into Test cricket.

"There's certainly guys you look at and think there's a lot of talent that could improve the side given the right opportunity. It's just a matter of trying to identify how they're going to do that." 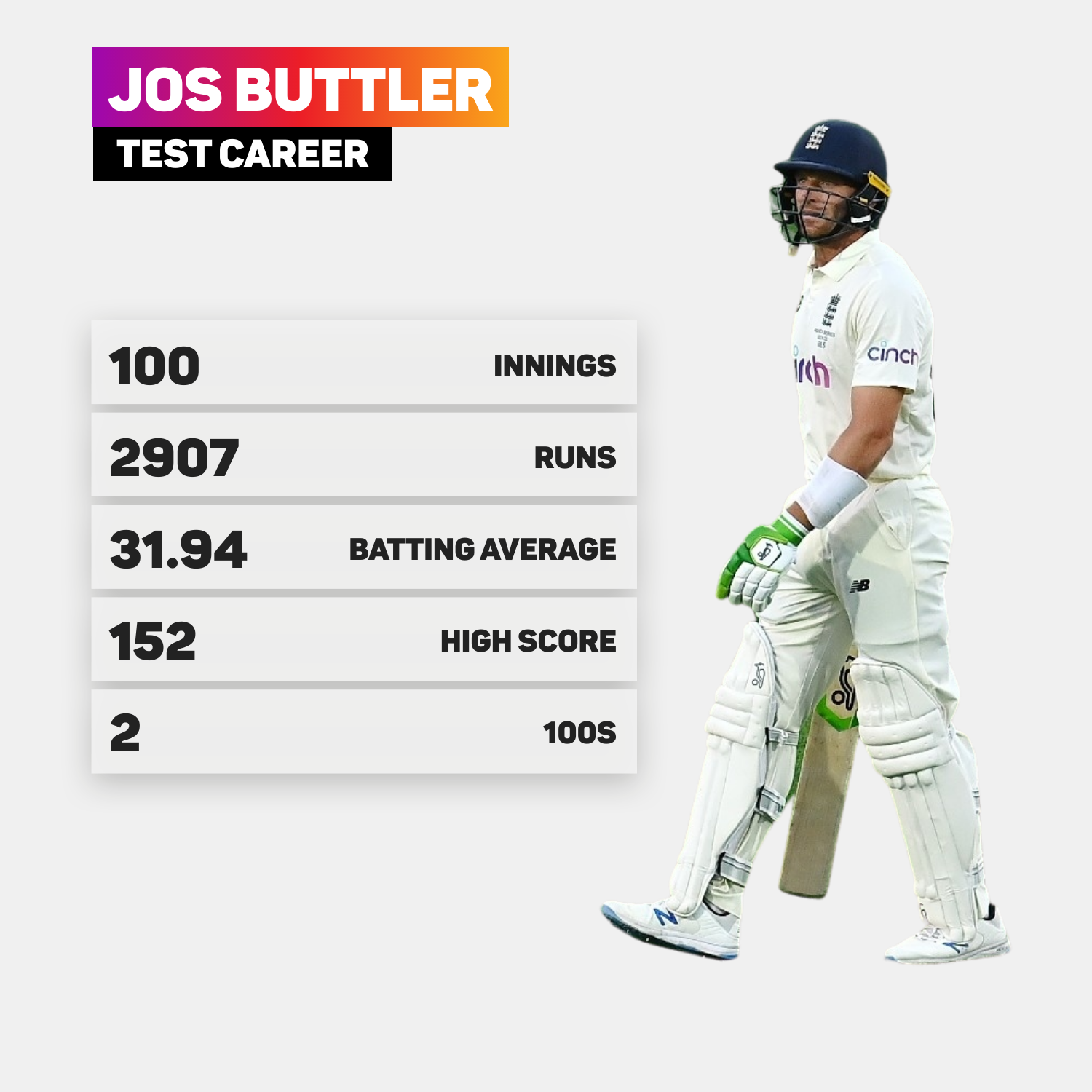 Moeen Ali, who played for Chennai Super Kings in this year's IPL, is another name linked with a return to England's Test side, along with Liam Livingstone and Adil Rashid.

"I'm sure if Mo wanted to [play Test cricket] and was prepared to put the yards in to make it back into the side, then he'd challenge, no doubt," McCullum added.

"Livingstone, Moeen, Rashid. All these guys have played international cricket before, been successful in the other forms of the game, and you'd think they'd be able to transition across, but we'll see.

"I look at them and think there'll be a time where they may get an opportunity if they're invested enough.

"There's probably been a bit of hurt at times for those guys, too, because they've been in the team at times and then out of the team at others, and there hasn't been that persistence for them.

"But my mentality is: if they're the best cricketers, why not have a conversation and see where you get to?

"If we're playing an attractive brand of cricket, we're successful and people are getting right behind what we're doing, then that might pique a bit of the interest of some of those guys. We'll build it first, then we'll see."

Livingstone has played 20 limited-overs internationals for England but is yet to feature for the Test side.

Questions remain over his interest in the longest format, with lucrative deals on offer in the IPL, and McCullum believes a discussion must be had with Livingstone over his commitments.

"A conversation needs to be had about what his appetite for Test cricket is. If he is keen on playing, then how does he see himself getting into the side?" McCullum said.

"Just because you're a good cricketer, it doesn't mean you automatically get selected. You've still got to earn the right to be able to do so."

England have posted three of their 10 highest-ever chases in their last three Tests, and Ben Stokes says nobody can match their bravery.

'Whatever they get, we'll chase it' – Root lauds England's 'incredible' record chase against India

England needed less than a session on Tuesday to tick off the final 119 runs and complete a record-breaking chase against India.

The final day of the rearranged fifth Test between England and India is fascinatingly poised with the hosts eyeing a record chase.

England's Curry ruled out for rest of Australia tour with concussion

After he was replaced at half-time in Perth, Tom Curry's tour of Australia is over, with the England flanker heading home through injury.

India were under pressure on day three of the Edgbaston Test when Jonny Bairstow hit 106, but steadied themselves to build a strong lead.

Though they will both eventually be sold as per Paul Allen's wishes, his sister Jody says neither the Seahawks nor the Blazers are for sale.