The British and Irish Lions are targeting a strong start to their tour of South Africa, taking on their Johannesburg namesakes on Saturday.

Chris Harris says the British and Irish Lions are "looking sharp" as they head into the first match of their South Africa tour.

The tourists face South Africa's own Lions, the Johannesburg-based team, on Saturday at Ellis Park.

Warren Gatland's team have a proud record to uphold, with the British and Irish Lions having won their first game after arriving in South Africa on each of their last six tours there.

Those victories have come by an average margin of 23 points –with their last such defeat a 9-6 setback in 1955 against Western Transvaal.

Scotland back Harris is set to make his debut for the visitors tomorrow as a much-changed team attempt to build on last weekend's win over Japan at Murrayfield.

The British and Irish Lions have never played the Lions previously but have taken on the affiliated Golden Lions, Johannesburg’s provincial side, and won each of their last four such games, most recently dishing out a 74-10 thrashing in 2009.

Only once have the travelling Lions won more heavily in South Africa, when dishing out a 97-0 thrashing to South Western Districts in 1974.

"It's an absolute honour to be puling on the jersey for the first time," Harris said on Friday. "I'm absolutely buzzing.

"It's pretty surreal to go from playing at university and working my way up through Newcastle and then representing Scotland, and this is just amazing to be able to pull on that jersey.

"I'm looking forward to it and it's a challenge I'm willing to relish. We got off to a really good start against Japan, but we're here to hit the ground running here in South Africa with another win.

"It's a new team, new combinations, but we've had a good week or two training together and we're looking sharp." 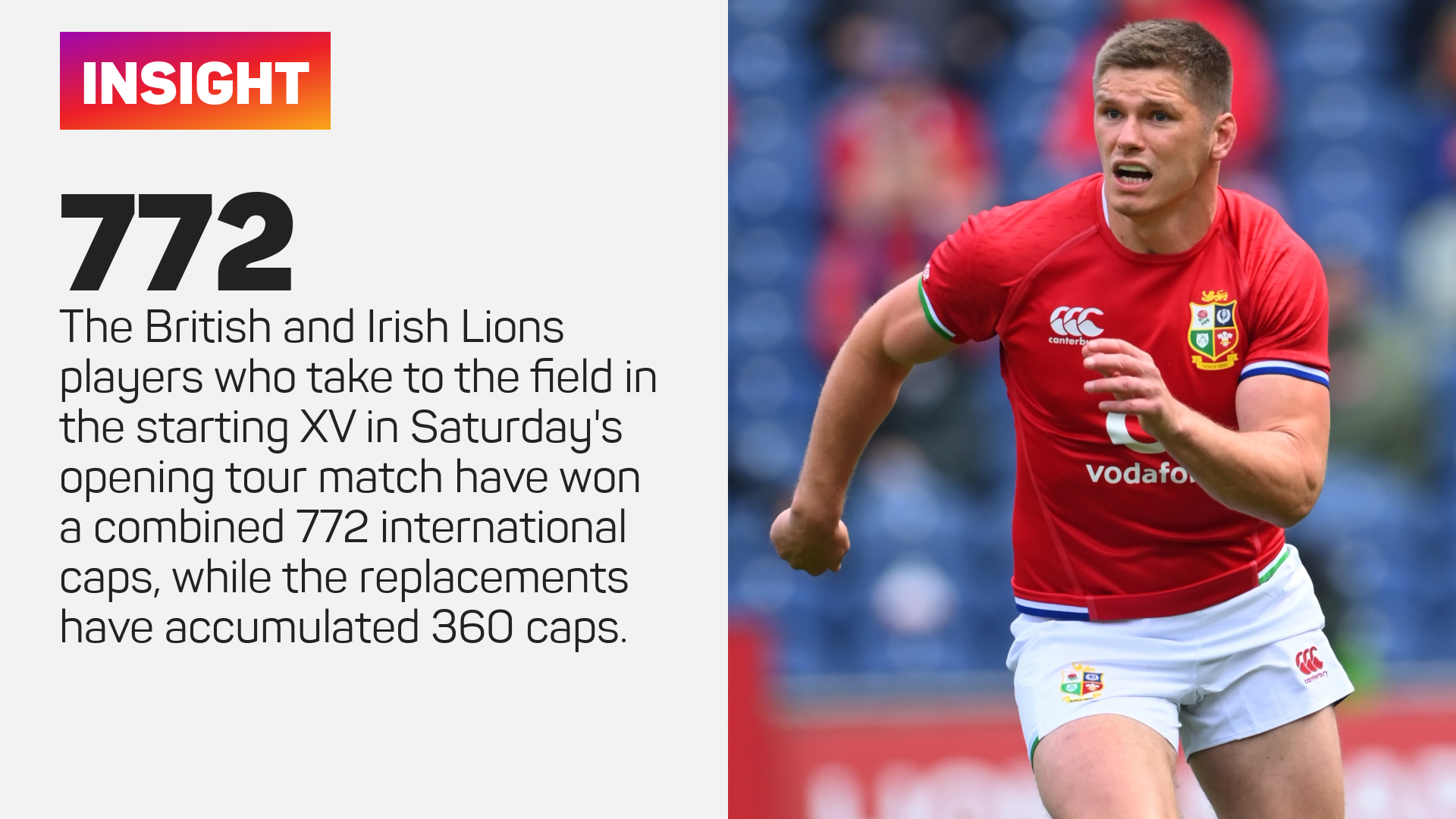 Scotland skipper Stuart Hogg will captain Gatland's team and was described as "a brilliant leader" by Harris.

"But he's also got plenty of brilliant leaders alongside him to help him along the way," said Harris, who will partner England skipper Owen Farrell in the midfield. "I think it will be a good game for him to start his captaincy as a Lions player."

Alun Wyn Jones was due to captain the Lions but was unable to make the tour after dislocating his shoulder against Japan.

His fellow Welshman and near-namesake Wyn Jones believes the British and Irish Lions being largely isolated in a team hotel while in South Africa need not be a hindrance.

"You've got to make it to your advantage," Jones said. "We're a close team now and I think the bubble's brought us closer. We spend a lot of time together and that can only be an advantage. We're having a good time together despite not being able to leave the hotel."

RUSSELL OUT TO MAKE AN IMPACT

The battle for the starting Test fly-half role is on, with Finn Russell the latest to get the chance to persuade Gatland he should play from the off in the first Test on July 24 in Cape Town.

Dan Biggar seized his chance last time out, being named man of the match against Japan, and Farrell is a contender for the role too, but Russell is certainly in with a strong shout, and these tour matches are opportunities to deliver persuasive performances.

It should help Russell to have Scotland team-mate Ali Price at scrum-half, and Hogg as skipper.

The visiting Lions can expect a robust welcome to South Africa, and Gatland will look for his team as a whole, not least the forwards, to show they are up for the battle ahead.

Prop Jones is keen to make an early impact and said in Friday's news conference: "We know what South Africa bring. They'll be a big pack and every team we face out here there'll be a big front five.

"As a prop, it's a challenge that I'm looking forward to and I can't wait to get into."

- Excluding their Test matches against the Springboks, the British and Irish Lions have suffered just one defeat in their 56 tour matches on South African soil since losing to Transvaal in 1968 (W54, D1), with the solitary defeat in that run coming against Northern Transvaal in 1997.

- The Lions won just one of their five completed matches in this year's Rainbow Cup SA (L4), against the Bulls in round four; their three games at Emirates Airlines Park saw an average of 66 points and nine tries scored per game (W1 L2).

- The Lions averaged the most carries (103) and passes (125) per game of any team in this year's Rainbow Cup SA, averaging 16 minutes and 35 seconds in possession per match, more than any other side; however, they gained the fewest metres (350) and beat the fewest defenders (19) on average.

- Finn Russell assisted 12 tries in the Top 14 for Racing 92 in the 2020-21 season, more than any other player in the league, and a competition-high four of those assists came from kicks.

- Sam Simmonds scored 21 tries for Exeter Chiefs in the recently concluded English Premiership, the most any player has managed for any side in an edition of the competition. He also topped the charts for carries (263), was the only forward to gain 1,000-plus metres, made the second most tackles (234) and beat the second most defenders (63) of any player.

Johannesburg will no longer play host to the second and third matches in the Lions' series with South Africa.

Kolisi returns from isolation to captain the Springboks

Four days out from the first Test against the British and Irish Lions in Cape Town, South Africa have named their team.