The Los Angeles Lakers lost without LeBron James, while the Denver Nuggets are in the midst of their worst run since January 2017.

The Los Angeles Lakers were without suspended superstar LeBron James and not even a Russell Westbrook triple-double could fuel the title hopefuls as they were beaten 106-100 by the New York Knicks.

James was not on the court because of a ban handed down – the first of his illustrious career – for his ejection against the Detroit Pistons, the four-time NBA champion struck Isaiah Stewart in the face and drew blood, sparking a melee.

In his absence, former MVP Westbrook had 31 points, 13 rebounds and 10 assists but the Lakers still lost on the road against the Knicks on Tuesday.

Westbrook posted 18 points in the third quarter to tie the game after the Lakers (9-10) had fallen in a 25-point hole, however, the Knicks recovered to beat the storied franchise for the ninth time in 11 games.

Anthony Davis put a pre-game illness aside to battle for 20 points, six rebounds and three assists in 34 minutes. 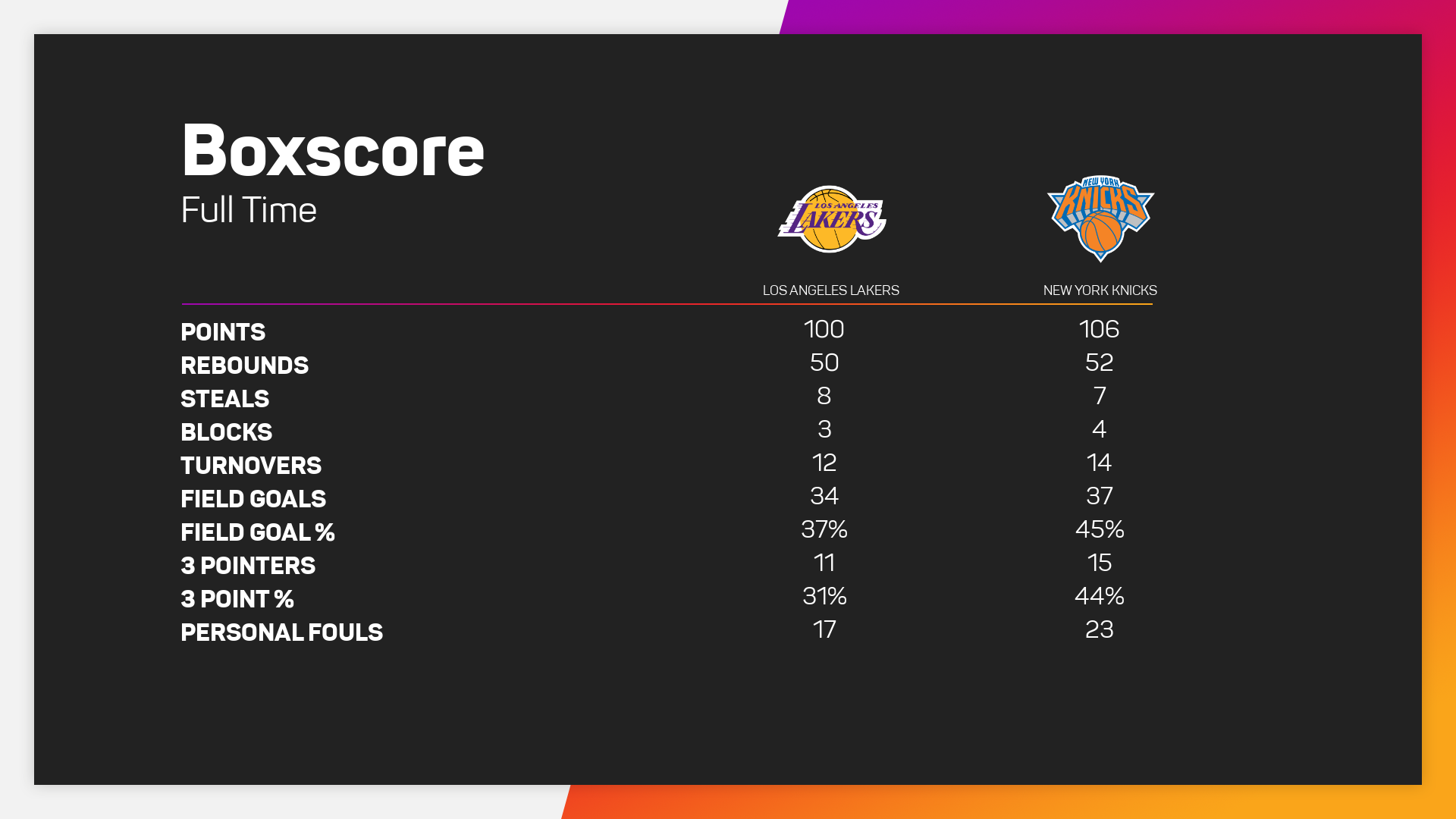 For the first time in his career, Kristaps Porzingis (30 points) scored 20 or more points in seven straight games after helping the Dallas Mavericks trump the Los Angeles Clippers 112-104 in over-time.

Reigning MVP Nikola Jokic missed his third straight game due to a right wrist sprain and the Denver Nuggets went down 119-100 to the Portland Trail Blazers. The Nuggets have lost five consecutive games – their worst run since a five-game skid in January 2017.

The number one pick in the NBA Draft, it is safe to say Cade Cunningham's rookie season has been a baptism of fire. The first-year Pistons teenager has been criticised for his performances. In a 100-92 loss to the Miami Heat, he was just two-of-10 shooting – making one of seven three-pointers – for six points in 29 minutes, while he had four turnovers.

Russell Westbrook has found form with the Los Angeles Lakers, who claimed a 117-102 win over the Boston Celtics on Tuesday.

The Brooklyn Nets took down the Dallas Mavericks, while the Los Angeles Lakers were too good for the Boston Celtics.

Luka Doncic addressed criticism of his fitness following the Dallas Mavericks' defeat to the Brooklyn Nets on Tuesday.

The Golden State Warriors rallied but the San Antonio Spurs came out on top for a surprise win on Saturday.

LeBron James fumed at the handling of his false positive test this week, slamming the NBA's process.

Chelsea and Juventus played out a 0-0 draw on Wednesday as Sam Kerr dealt with a pitch invader.

Kick-off was initially delayed before the match was postponed and pushed back to Thursday in Bergamo.

Barcelona's Champions League campaign is over, with Thomas Muller highlighting a lack of intensity as a reason for their elimination.

Tottenham indicated their match with Rennes has been postponed, but the French club say UEFA is yet to make such a decision.

Ralf Rangnick felt Manchester United's 1-1 draw with Young Boys could have finished 4-4, but explained his players were not clinical enough.

Barcelona have failed to get out of their Champions League group for the first time since 2000-01 after losing to Bayern Munich.

Tottenham's clash with Rennes called off after COVID-19 outbreak

Eight players and five staff members have tested positive for COVID-19 at Tottenham, forcing their clash with Rennes to be postponed.

Juventus beat Malmo to finish above Chelsea in their Champions League group but Massimiliano Allegri was not entirely pleased.