His aura is gone! - Poirier and McGregor trade insults ahead of UFC 264

Dustin Poirier will face Conor McGregor at UFC 264 in Las Vegas on Saturday in one of the year's most highly anticipated fights.

The trilogy bout take place at the T-Mobile Arena with a 100 per cent crowd capacity.

"I am so happy to finally be able to say: Vegas is back," UFC president Dana White said when the fight was announced in April.

McGregor had previously claimed the bout was off during an expletive-laden exchange on Twitter and that heated build-up has continued.

Poirier took victory in their previous showdown at UFC 257 in January in Abu Dhabi with a second-round knockout, after which McGregor conceded the result was "a tough one to swallow".

McGregor, who described his opponent's performance three months ago as "phenomenal", stopped the 32-year-old American in 106 seconds in their first encounter in September 2014.

The former two-weight world champion, who is also 32, has not won a UFC bout since January last year.

Fight build-up has been as entertaining you would expect, with McGregor aiming a kick at Poirier as the duo went head to head at the pre-fight news conference on Thursday.

Here are some of the best quotes from the event which took place with both fighters and a large crowd.

McGregor did not hold back when he explained what he planned to do with Poirier.

"I'm gonna go through his head, put holes in and take it off his shoulders - that's the goal here!

"He's done here, this is it for him. This is the end of the road.

"Even after that last fight saying, 'Oh I don't love this [fighting] anymore' - he knew what was coming, he knew the smacks he took.

"Saturday night he's getting walked around that octagon like a dog and put to sleep."

And Poirier did not dismiss the threat posed by the Irishman.

"I think he has a big advantage in some areas like his punching power.

"That's been worked on for years, and I'm sure some of it's God gifted, his timing is very good, but I truly believe he is a well-rounded martial artist.

"But he's so successful in those areas that he doesn't have to go in there and shoot for a takedown because he believes he's going to finish the fight on the feet.

"He doesn't have to play jiu-jitsu because he's so confident in what's been working for him, he's knocked out a bunch of greats. Don't fix it if it's not broken, I truly believe he is a well-rounded fighter."

A crowning moment for McGregor came when he defeated Eddie Alvarez in November 2016 to become the first UFC fighter to be world champion in two weight divisions simultaneously.

He insists there is better still to come from him.

"I'm an evolution of that guy. I'm better than that man. I feel like I've come full circle and I look forward to showing it.

"That night was widely regarded as the single greatest performance in UFC history. This performance on Saturday night, I'm going to top it."

POIRIER DOUBTS THAT IS POSSIBLE

But Poirier does not think McGregor is the same force he once was.

"For me, the aura's not there anymore. Not anymore.

"A very dangerous fighter sitting right there for sure but I see a man.

"You guys in the crowd, cheer it up, have fun. But I see a man that I've defeated and know that I can defeat again." 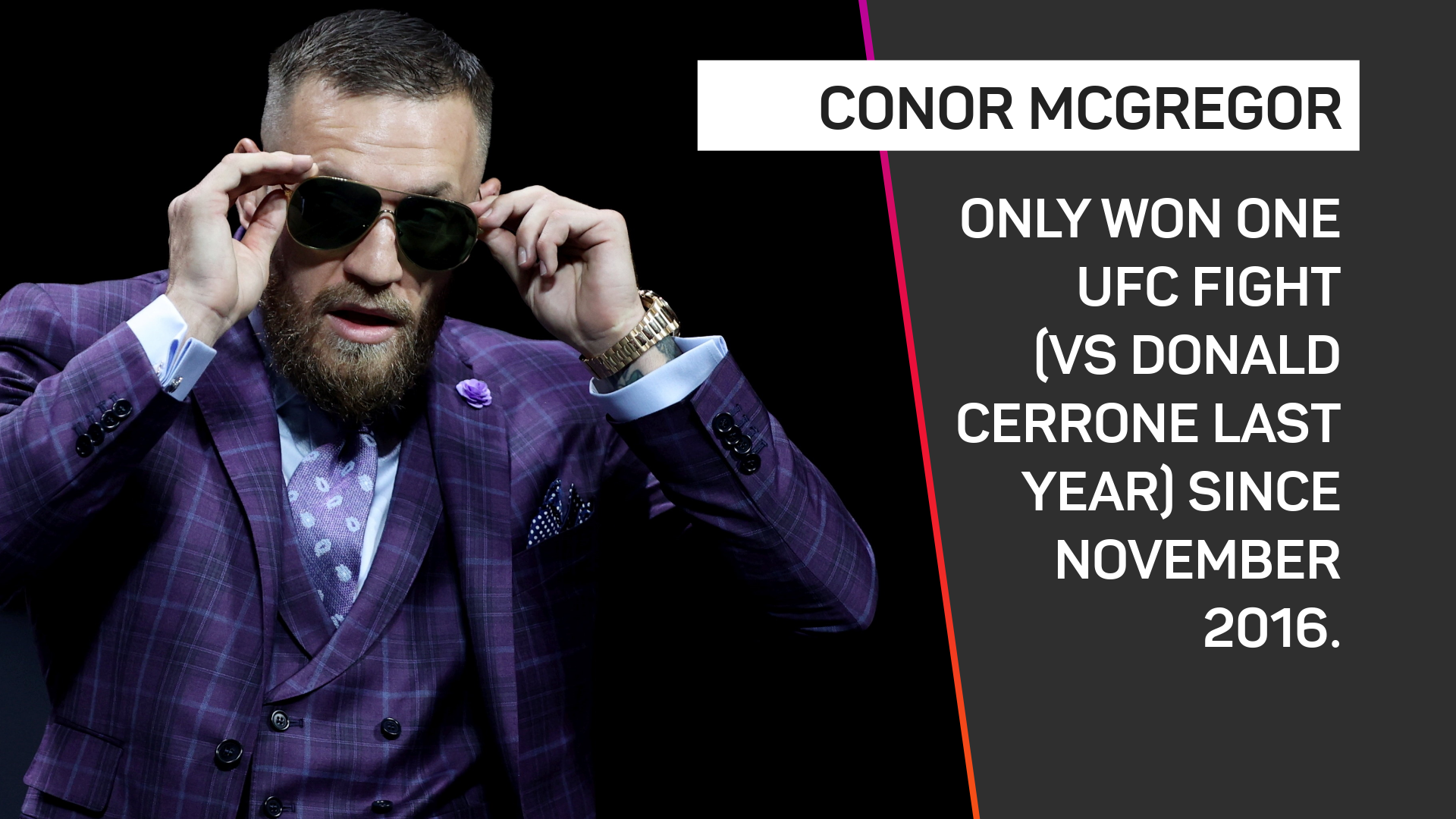 James 'Buster' Douglas achieved one of sport's greatest upsets by beating Mike Tyson in 1990 but immediately lost his next fight and his titles to Evander Holyfield.

"He's going to be known for that [like Buster Douglas].

"It was a fluke win and I'm going to correct it on Saturday night. It's on now."

POIRIER SAYS HE IS DIFFERENT

McGregor was asked by a fan why he was being so confrontational with Poirier in the build up to this fight after showing significant respect to his opponent around their second bout.

Poirier interjected with a put down, saying "Because he got knocked the f*** out!" before going on to criticise the falling quality of McGregor's trash talk.

"He was not McGregor fast but McGregor sleep. Respect to him and everything that he's done [but his trash talk is] f*****g weak.

"I don't hate anybody up here. I'm in a different place mentally.

"I am straight business. I've never really had that hype pushed. I know who I am. I'm the same guy and it's easy to be me.

"I knew this [rematch] was next. As soon as I got to my hotel room that night [in January], I knew this was next. I've kind of been preparing for this fight since that fight ended."

TALE OF THE TAPE

Poirier has 27 wins, six losses and one no contest on his record, while McGregor has 22 wins and five defeats.

In their last fight, Poirier attempted more significant strikes than McGregor (91 to 66).

He also landed more, 52 per cent compared to 43 for the Irishman.

McGregor claims his shin was fractured before facing Poirier

Conor McGregor sustained a broken leg against Dustin Poirier but has suggested he was already carrying an injury ahead of the fight.

After undergoing surgery on a leg injury sustained against Dustin Poirier, Conor McGregor has vowed to return stronger than ever.

Poirier will fight McGregor again 'in octagon or on sidewalk'

Though he is in no rush to fight for the lightweight title, Dustin Poirier is sure he will meet Conor McGregor again.

Connor McGregor left the octagon on a stretcher after appearing to break his left leg/ankle at the end of the first round.

His aura is gone! - Poirier and McGregor trade insults ahead of UFC 264

Israel Adesanya defeated Marvin Vettori to defend his title on Saturday as Brandon Moreno made history.

Charles Oliveira dropped Michael Chandler at UFC 262 and was similarly emphatic in response to post-fight words from Conor McGregor.

Charles Oliveira dropped Michael Chandler in the second round to claim in the UFC lightweight title vacated by Khabib.

Manchester United and Celtic are on Conor McGregor's radar as he looks to purchase a sports team.

Anderson Silva wished Chris Weidman well after the American suffered a leg injury at UFC 261 that was similar to Silva's from 2013.

Scepticism still reigns supreme over Tokyo 2020. It remains to be seen if the Games can truly act as a unifier.