Lewis Hamilton is "incredibly disappointed" in himself after both he and Mercedes team-mate George Russell crashed out of qualifying ahead of the Austrian Grand Prix.

The precursor for Saturday's sprint race in Spielberg proved a dramatic one, with Red Bull's Max Verstappen taking pole ahead of Ferrari pair Charles Leclerc and Carlos Sainz.

Hamilton has yet to win a race this season after 10 rounds but looked good value to compete for pole until losing control into Turn 7, causing him to skid into the barriers.

That crash in Q3 ruined his chance of starting high up the grid on Saturday, with the seven-time world champion instead down in 10th.

Russell did not fare much better as he caused another red flag after spinning into the barriers at the final corner on a day to forget for Mercedes.

Team boss Toto Wolff told the duo they "should not beat themselves up", adding: "I'd rather have a fast car and a qualifying like this than not having the pace to be in the top four."

But Hamilton, who had been fastest at the start of Q2, was upset that he could not see out the job at Red Bull Ring.

"It was a big hit but I'm okay," he told Sky Sports. "I'm incredibly disappointed in myself ultimately and so sorry to the team who worked so hard to put this car together.

"I lost the back end into Turn 7 and that was that. I'm encouraged. I'm encouraged of course to see our performance. We weren't expecting for it to be as close as that today.

"That is a huge positive from the team but I am really quite far back [for the sprint] so I don't know what is possible from there. Hopefully I can make up for some lost time." 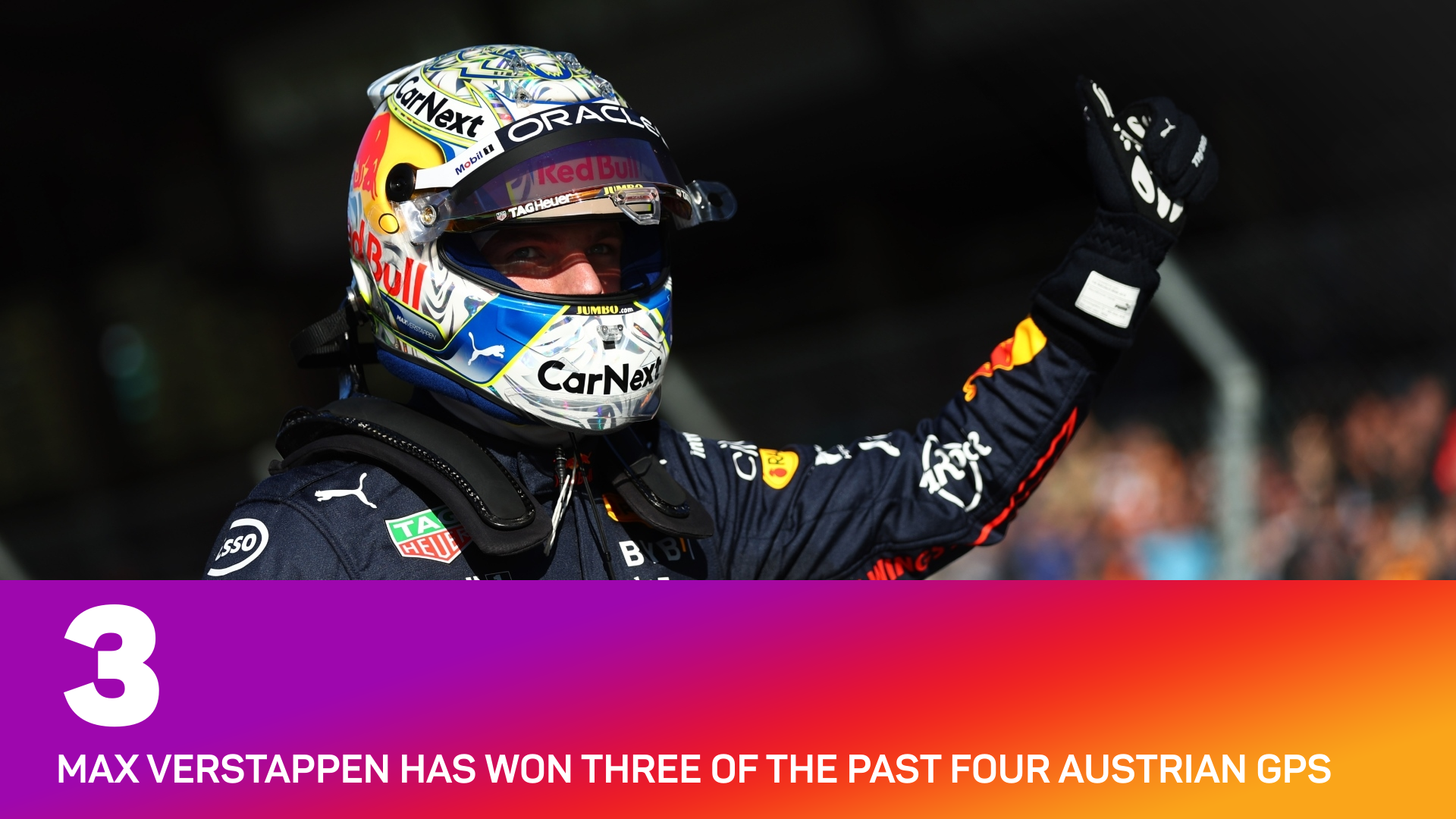 Following Hamilton and Russell's crashes, there was time for one final lap for the remaining eight drivers.

Leclerc and Sainz looked set to claim a Ferrari one-two, only for Verstappen – who has now taken the last three pole positions on this track – to post a time of 1:04.984

That was 29 thousandths of a second quicker than Leclerc and leaves Verstappen well positioned to surpass Alain Prost for the most victories at the Austrian GP (three apiece).

"It was a very long wait of course between the two runs," the Dutchman said. "That is never great as once you are in the rhythm you want to keep going.

"Also the track temperature dropping, the wind changing a little bit, but in the end it was a very tight qualifying and it is a really challenging track to get everything right.

"There aren't many corners but the ones you have are quite tricky and easy to make a mistake. I'm quite happy with pole but also tomorrow and Sunday you can get the points.

"It's incredible to see the crowd here and see so much orange. It puts a smile on my face and hopefully we can make it a great weekend."

Verstappen leads team-mate Sergio Perez by 34 points heading into the weekend's action, while Leclerc is 43 points behind after failing to build on a bright start to the season.

After pushing Verstappen all the way in qualifying for the 24-lap sprint, which establishes the grid for the main grand prix, Leclerc is hoping to do likewise over the next two days.

"I just want to have a clean race," he said. "It's been five races where I've had a bit of a disaster on my side.

"I just hope that everything will go clean in the weekend and we can finally score the points that we deserve."

Leclerc says he and Ferrari must 'grow' from mistakes

Charles Leclerc has seen a 46-point lead slip to an 80-point deficit in the F1 championship, but is eager to make the most of the season.

Lewis Hamilton is hoping to enjoy success in a new sport after buying a stake in the Broncos.

Red Bull and Honda have forged a winning alliance in Formula One that will continue for the next three seasons, it was revealed on Tuesday.

Charles Leclerc's chances of winning the Hungarian Grand Prix were wiped away after a surprising call to take the hard compound tyres.

Max Verstappen started 10th on the grid in Sunday's Hungarian Grand Prix, but the reigning Formula One world champion stormed to victory.

Hamilton pleased by resurgence as Mercedes close the gap on Ferrari

Mercedes sit just 30 points behind Ferrari in the constructors' championship following another successful weekend for the team in Hungary.

Max Verstappen rose from 10th on the grid to win the Hungarian Grand Prix and extended his world championship lead.

George Russell stunned the Ferraris in Hungary to snatch pole position but faces a fight in Sunday's race.

The Red Bulls of Max Verstappen and Sergio Perez face an uphill battle after qualifying 10th and 11th in Hungary.