Anthony Joshua may have won back his world heavyweight titles once before, but against Oleksandr Usyk he must understand what went wrong.

At 32 years old, Anthony Joshua should be enjoying the prime of his career, but in his rematch against Oleksandr Usyk on August 20 he faces the prospect of his status as a truly top-echelon attraction coming to an end.

Joshua, an Olympic gold medallist and maybe the most physically imposing heavyweight in boxing, will contest his 12th consecutive world title fight when he steps into the ring in Jeddah, Saudi Arabia, with nine wins and two losses over that span.

The Watford-born star has lost before – in a shocking upset via seventh-round knockout against Mexico's Andy Ruiz Jr at Madison Square Garden – which he proceeded to avenge in style, with a dominant unanimous decision victory in the rematch, also in Saudi Arabia.

He will be hoping the story repeats itself after his convincing defeat at the hands of Usyk at Tottenham Hotspur Stadium in September, as he again prepares for his rematch on the other side of the world, away from all the distractions of friends, family and the celebrity that comes with being the heavyweight champion of the world.

But Usyk is a very different proposition than Ruiz ever was.

Ruiz was a late replacement opponent when he faced Joshua, and it was clear the towering, muscle-bound Brit underestimated the stout, stocky Mexican, as he was shocked early by the challenger's power and never truly recovered.

With a full camp and a renewed sense of focus, Joshua picked apart Ruiz in the rematch, with the fight leaving even the most passionate Ruiz fans questioning how he ever pulled off the upset in the first place.

Usyk, on the other hand, is no late replacement for anyone, and he has been on the same path towards the heavyweight throne as Joshua since their amateur days. At the London 2012 Olympics, where Joshua collected the super-heavyweight gold medal, Usyk ran through the heavyweight division, and has since put together a perfect record in the cruiserweight weight class.

After building a record of 16-0, including going 7-0 in cruiserweight world title fights, Usyk made the decision to make the jump up to heavyweight, and after wins against Chazz Witherspoon and Derek Chisora, he earned his shot against Joshua, and took it with both hands.

For Joshua, this time there was no lack of planning, and there was no reason to underestimate Usyk's world-class ability – in other words, there were no excuses. So how can he make sure the rematch is nothing like the original, and become a three-time world champion in the process?

I wanted to be a slicker boxer. Boxing 1.0.1 - hit & don’t get hit. I was told if I love fighting & want to go on 4 years try not to get hit a lot. A loss or a beaten shouldn’t make you scared of boxing. It made me work on my weakness. Hard 2 explain but make of it what u can https://t.co/g4WlQhkA3l

Usyk is a near-perfect heavyweight fighter, with power in his hands to sting anyone, while retaining the foot speed and agility of a much smaller cruiserweight – but like every boxer, he has flaws, and tendencies that can be exploited.

Without a doubt, Usyk fights best as the aggressor, taking the centre of the ring and marching forward to force his opponents to fight with their back near the ropes and nowhere to run.

But Joshua is the bigger (six-foot-six against six-foot-three), longer (82 inch reach against 78 inch reach) and younger (32 against 35) fighter, meaning he has the physical tools necessary to deny Usyk his desired position as the ring general dictating the pressure.

Also, in Usyk's two most competitive world title fights – a majority decision win against Mairis Briedis and a unanimous decision against Murat Gassiev – he showed his defence is far from impenetrable, particularly against left hooks and body shots. The left hook in particular, including feints, seem to draw out the biggest reaction from Usyk, who usually opts to retreat and reset as opposed to firing back a counter.

He is also far from a quick-starter, instead opting to remain relatively cautious through the opening few rounds as he measures his distance and timing, before increasing his pace and volume in the second half of the fight to overwhelm his tiring opponents.

If Joshua is able to hold the centre of the ring early, rely on his length advantage to keep Usyk on the outside, and make a concerted effort to focus on body shots whenever the Ukrainian closes the distance, he could find himself with a healthy early advantage and the momentum heading into the middle stages of the fight.

Identify what went wrong in the first fight

In orthodox versus southpaw matchups, the fight is often decided by the footwork battle, and Usyk dominated in that department for all 12 rounds in his first look at Joshua.

Whoever controls the 'outside' foot position is able to fire straight shots to the body and head with their rear hand, while also being able to easily circle away from their opponent's straight shots as they try to punch across their body diagonally. 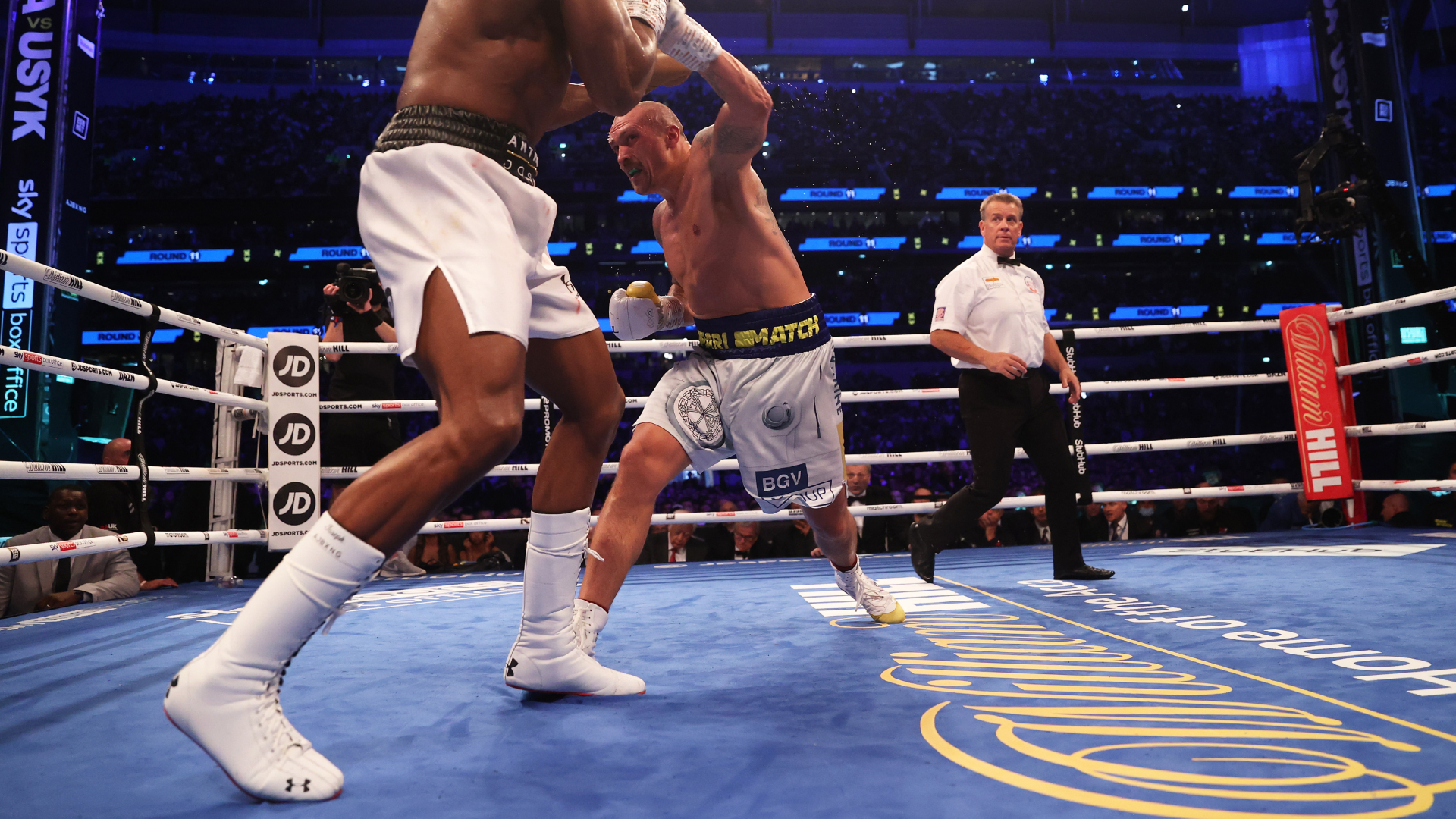 While Usyk has the advantage as far as foot speed goes, the problem in the first fight was more about Joshua's willingness to concede the positioning battle and try to punch his way out of it, which led to plenty of flailing swings and a lack of clean connection.

One way to dissuade the southpaw from taking the preferred position is to aggressively use the left hook early – to the head, as Joshua loves to do, but more so the body – as it will come from the direction Usyk is constantly trying to move, lean and escape to, while his southpaw stance naturally exposes the vulnerable liver area.

If Usyk begins to feel like that left hook is coming every time he moves towards it – or absorbs an uncomfortable blow to the liver – he could be more willing to hold a neutral stance and level the playing field, completely changing the dynamic from their first meeting and opening the door for Joshua's power and size advantage to come to the fore.

WWE fans were treated to another appearance from Tyson Fury in Cardiff, with the boxer open to moving into wrestling in the future.

The heavyweight bout between Tyson Fury and Oleksandr Usyk will have to wait for 2023, with the former unwilling to hang around this year.

Oleksandr Usyk has made his desire to face Tyson Fury clear and the WBC heavyweight champion has responded.

Earnie Shavers, who fought Muhammad Ali for the heavyweight title, dies at 78

Shavers is considered one of the hardest punchers in the history of boxing, with world title fights against Muhammad Ali and Larry Holmes.

World heavyweight champion Tyson Fury said "let the games begin" as he set a deadline for offers to fight him to be submitted.

Usyk's promoter says undisputed fight with Fury is 'in the making'

The winner of a bout between Tyson Fury and Oleksandr Usyk would be the first undisputed heavyweight champion since Lennox Lewis.

With speculation mounting that Tyson Fury could reverse his retirement to face Oleksandr Usyk, Mauricio Sulaiman would welcome the bout.

Fury-Usyk unification bout 'will be made', says promoter Warren

After a second victory over Anthony Joshua, Oleksandr Usyk now has Tyson Fury in his sights - and the Briton looks set to answer the call.

Anthony Joshua launched a bizarre rant after suffering a second defeat to Oleksandr Usyk, and on Sunday the fighter explained his actions.

Oleksandr Usyk once again got the better of Anthony Joshua, but the latter has no interest in stepping away from the ring just yet.