India were sent packing for 78 runs by England on day one of the third Test before the hosts put 120 on the board in response.

England took complete control of their third Test with India after bowling out their opponents for just 78 on day one at Headingley and replying with 120-0.

The tourists, leading 1-0 in the series and seeking back-to-back Test wins in England for just a second time, were wiped out in just over 40 overs after electing to bat first.

Virat Kohli's side surrendered their last six wickets for 30 and England made a more-that-steady start to their reply by the end of play on Wednesday thanks to Rory Burns and Haseeb Hameed.

Star man James Anderson got England off to a flier as he picked up three wickets for the loss of six runs in his opening spell of eight overs, dismissing KL Rahul (0), Cheteshwar Pujara (1) and Kohli (7) in quick succession.

India were in trouble at 21-3 and, while they were given temporary respite by Rohit Sharma and Ajinkya Rahane, the latter was soon sent packing by Ollie Robinson for 18.

Robinson picked up from where he left off after lunch with the wicket of Rishabh Pant, who edged straight into the hands of Jos Buttler for just two runs.

That was Buttler's fifth catch and England were not finished there as Craig Overton, in for Mark Wood, got Sharma – India's top scorer with 19 runs – caught trying an awkward pull shot.

Mohammed Shami was then caught at third slip by Rory Burns for a golden duck, before Sam Curran got Ravi Jadeja (4) and Jasprit Bumrah (0) both out lbw.

Mohammed Siraj (3) was the last to fall for a shocked India, the ball coming off his bat and landing in the hands of Joe Root at slip, leaving India with their ninth-lowest total in Test history.

England had the chance to get some runs on the board before the end of play and their batters steadily backed up their bowlers' hard work.

Burns and Hameed produced an unbroken century stand for the first wicket to give England a lead of 42.

Burns reached 52 by the close of play – his 10th Test half-century – and partner Hameed will resume at 60 not out on Thursday as England look to close in on an emphatic victory to level the series. 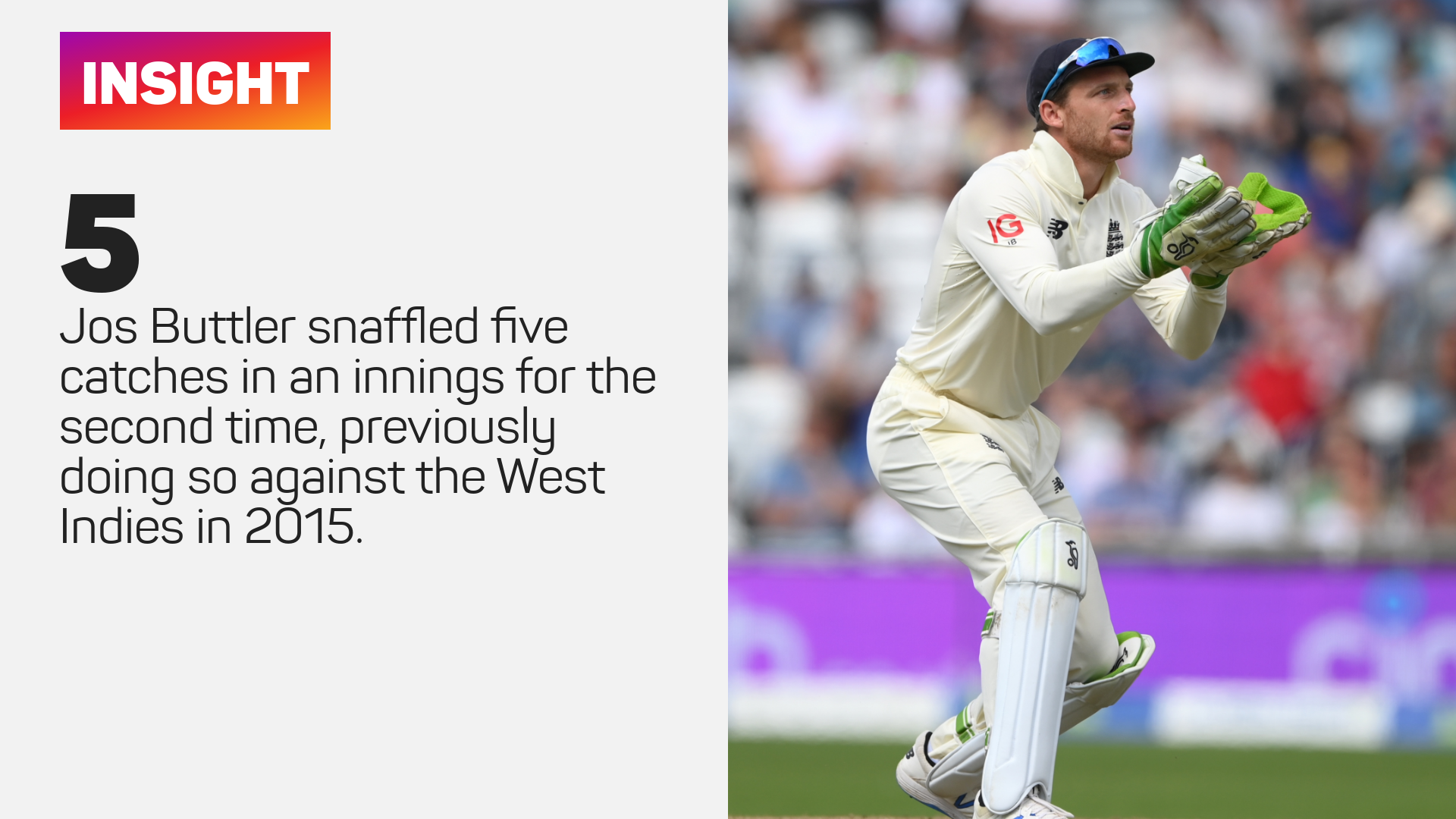 India posted their third-lowest total against England with 78 runs and their lowest since 1974 when skittled for 42 at Lord's.

It was India's third-lowest score ever after electing to bat first, meanwhile, behind the 76 they managed against South Africa in 2008 and 75 against the West Indies in 1987.

England were rampant and Anderson in particular was in inspired form, setting the tone early on. Buttler also deserves special praise as he took five catches in an innings for a second time, previously doing so against the West Indies in 2015.

Hameed steps up on return to top two

Burns and Hameed refused to be budged as England became only the third side in Test history to bowl out the opposition and end day one in the lead with both openers still in play.

That is the 22nd new opening partnership used by England in the past nine years, with Hameed opening the batting in Test cricket for the first time since 2016 after jumping the order following Dawid Malan's recall.

Both men faced more than 100 balls but looked comfortable for large parts, with England's opening partnership registering a century at home for only the third time in five years.

Kolkata Knight Riders returned to Indian Premier League action with an emphatic performance, securing a third win in a hurry.

After announcing he will step down as India's T20I captain, Virat Kohli has confirmed he will soon stop leading Royal Challengers Bangalore.