Durant, Harden pleased with response as championship-chasing Nets bounce back

Kevin Durant and James Harden reacted to the 123-90 rout of the Orlando Magic midweek.

Brooklyn Nets superstars Kevin Durant and James Harden expressed their pleasure with the team's response after bouncing back to crush the Orlando Magic in the NBA on Wednesday.

After falling to the Chicago Bulls on Monday, the championship-chasing Nets routed the lowly Magic 123-90 on the road in Orlando midweek.

Durant posted 30 points on 11-of-12 shooting, while Harden had a triple-double of 17 points, 11 rebounds and 11 assists to lead the Nets to their sixth win in seven games.

"That's really what you want to do — finish quarters, finish halves off the right way," said Durant, who had his sixth 30-plus game of the season. "We got to lead and we got some momentum, we got to take advantage. I think we did that."

In his 12 games this season, Durant has been averaging 29.5 points, 8.5 rebounds and 5.0 assists per game, while shooting 58.5 per cent from the field and 82.9 per cent from the free-throw line. According to Stats Perform, the last player to reach all those numbers over any 12-game span was Bulls great and Hall of Famer Michael Jordan in 1988. 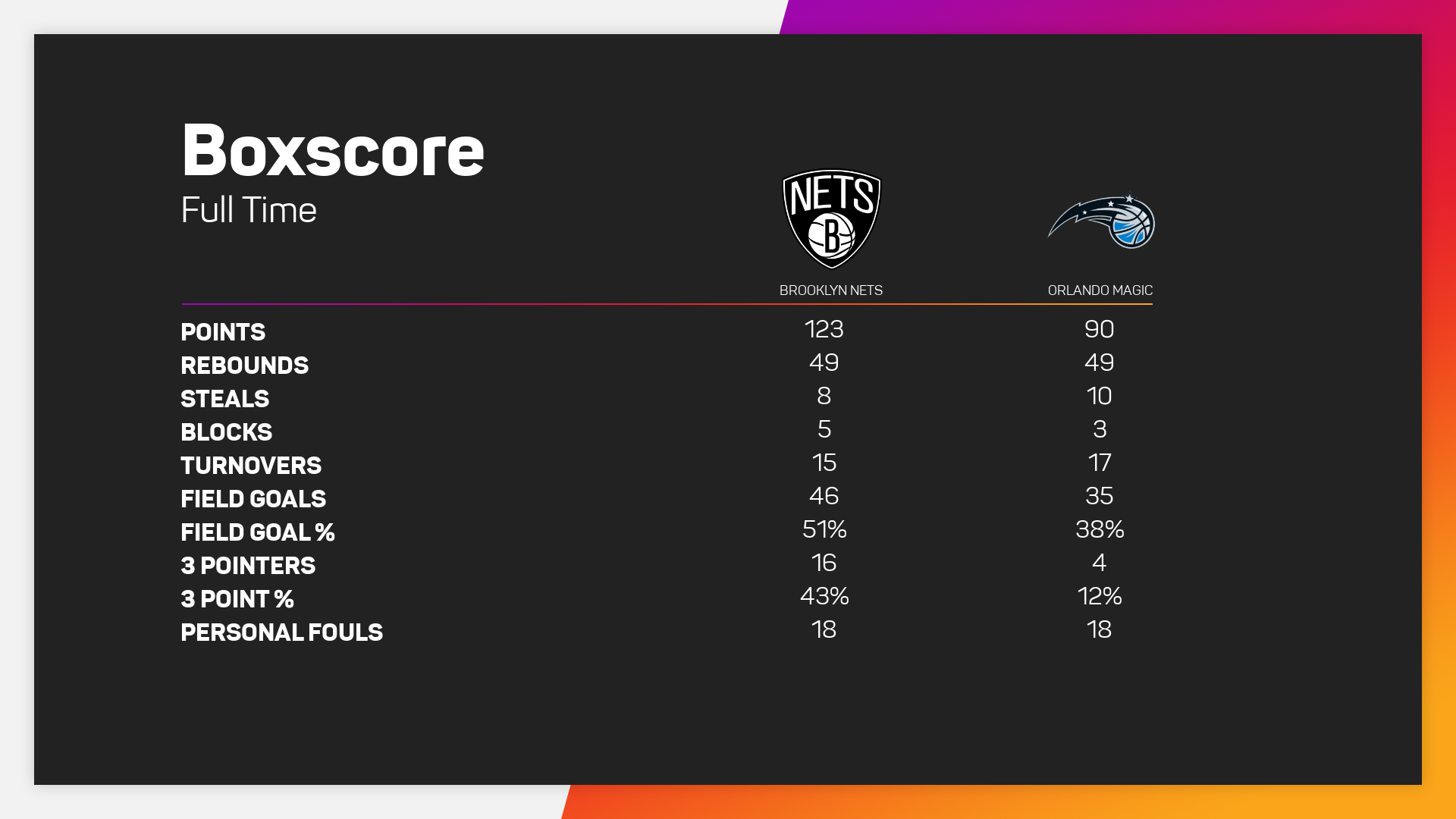 Harden added: "It's a long season. The quicker we can bounce back and get rid of it, the better our team will be, individually and as a collective unit. In Chicago, that quarter [the fourth quarter] was just one of those quarters.

"First three quarters we played pretty solid. We just wanted to come back, get that bad taste out of our mouth and perform tonight and we did an unbelievable job of that. Get some rest and we got two more games on this six-game road trip."

The Nets improved to 8-4 for the season as head coach Steve Nash said: "It was a solid bounce-back game from Chicago. I thought we got a little sloppy at the end of the half where we might have found some separation there.

"They responded in the third and a lot of good things. I thought we had moments on both ends of the floor where we were really good and really diligent with our game plans. I was happy with it and the guys did very well."

Juventus are the subject of an investigation from police in Turin.

Inter on a mission, not in transition - Inzaghi hails high-flying defending champions

Simone Inzaghi arrived from Lazio with the understanding he would inherit a much-changed Inter, and everything seems to be going to plan.

Barcelona were not at their best against Villarreal but still ran out 3-1 winners, much to the delight of head coach Xavi.

Stats Perform looks at the Opta data from the Premier League, as Liverpool thump Southampton and Arsenal beat bottom side Newcastle United.

Belenenses SAD could only field nine players, two of whom were goalkeepers, for Saturday's match with Benfica.

Nagelsmann relishing Dortmund clash as Bayern warm up for Klassiker

Bayern Munich earned a narrow win over Arminia Bielefeld in the Bundesliga thanks to Leroy Sane's strike, and next is a clash with Dortmund.

Deyverson came on to score in extra time as Palmeiras became the first team in 20 years to win back-to-back Copa Libertadores titles.

Memphis Depay and Philippe Coutinho scored late on as Barcelona earned a 3-1 win at Villarreal on Saturday.