Shikhar Dhawan led from the front with an unbeaten 86 as India cruised to a seven-wicket win over Sri Lanka in the first ODI in Colombo.

The hosts headed into the contest on the back of coronavirus-interrupted preparations and ructions behind the scenes between players and the national board, but scrapped their way to a competitive 262-9 despite no player passing 50.

Dhawan - captaining a largely second-string India, given Virat Kohli's Test squad have departed for their Test series in England next month - ensured the tourists reached their target with 80 balls to spare, while debutant Ishan Kishan (59) and Prithvi Shaw (43) also impressed - the latter hitting nine of his 24 deliveries to the boundary.

Avishka Fernando and wicketkeeper Minod Bhanuka put on 49 for the opening wicket before Fernando lobbed Yuzvendra Chahal's (2-52) first delivery to Manish Pandey at short cover to depart for 33.

Leg-spinner Chahal excelled in tandem with slow left-armer Kuldeep Yadav (2-48), who accounted for Bhanuka (27) and Bhanuka Rajapaksa – the number three's breezy 24 from 22 deliveries briefly threatening to change the tempo – to leave Sri Lanka 89-3.

From that point it was a repeated story of useful contributions without anything substantial. New captain Dasun Shanaka and Charith Asalanka diligently compiled 39 and 38 respectively before each falling to swing bowler Deepak Chahar (2-37), while Krunal Pandya's miserly left-arm spin (1-26) snared up the middle overs, leaving Chamika Karunaratne's unbeaten 43 off 35 balls as Sri Lanka's highest score.

Shaw made it clear India would not be shackled in similar fashion as he climbed into Sri Lanka from the off. 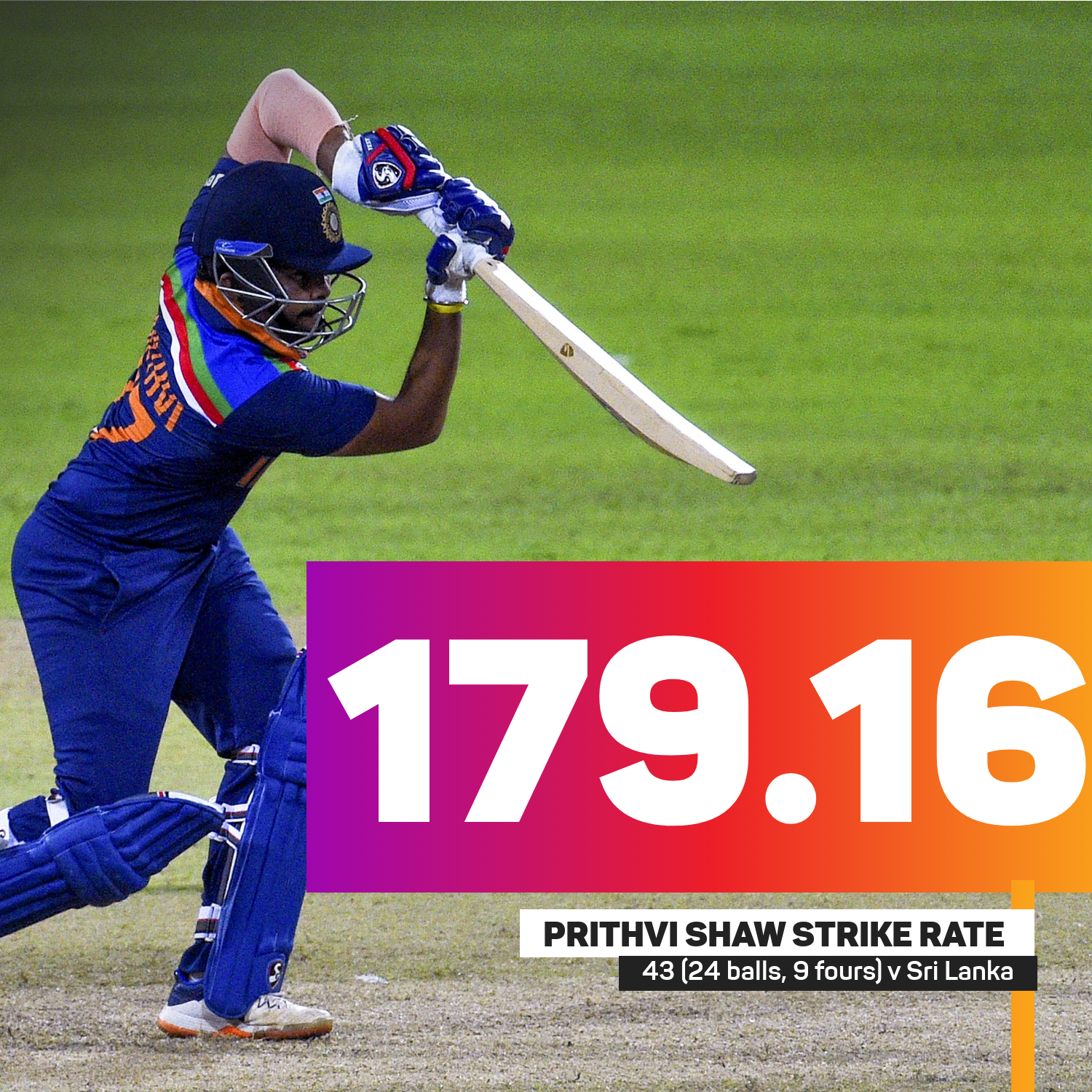 Isuru Udana's two overs disappeared for 27 – including three successive fours through the covers - and the score was 58 when Fernando caught Shaw at long-on off Dhananjaya de Silva, whose two wickets came at a steep cost of 49 runs in five overs.

Kishan, who enjoyed an unforgettable 23rd birthday, ensured there was little let-up. He danced down the pitch to dispatch Dhananjaya for six first ball, clattering the next for four more through cover point.

The youngster reached a half-century in 33 balls and edged his 42nd behind off Lakshan Sandakan but Dhawan remained as a regal presence, finding further willing allies in Manish Pandey (26) and Suryakumar Yadav (31 not out) to complete a resounding victory.

The difference between two – in isolation, at least – impressive opening partnerships set the tone for the contest. But the end of the first powerplay, Sri Lanka were 55-1. India were already up to 91-1 after 10 overs. "The Indians batted aggressively," Shanaka said. "We needed to vary the pace as the ball was coming on to the bat nicely. In the next game, we will have to improve on that."

Dhawan laughing as the elder statesman

When you've top-scored as a victorious captain and also surpassed 6,000 career ODI runs, there is perhaps no better time for self-deprecation. Dhawan certainly thought so, claiming he did not have the required shots to reach three figures with an exciting young batting line-up firing all around him.

"I was telling them to take it easy actually," he beamed, before chuckling his way through a post-match presentation where Shaw was named player of the match despite scoring half as many runs as his skipper.

"The way these young boys play in the IPL, they get lots of exposure and they just finished the game in the first 15 overs only. I thought about my hundred but there were not many runs left. When Surya came out to bat, I thought I need to improve my skills."

Kusal Mendis, Niroshan Dickwella and Danushka Gunathilaka have been sent home from Sri Lanka's tour of England for a bio-bubble breach.

England's ODI match against Sri Lanka on Tuesday will go ahead as planned despite five officials needing to self-isolate, the ECB has said.