Deepak Chahar was India's unlikely batting hero as his 69 not out inspired a thrilling ODI series-clinching win over Sri Lanka by three wickets.

India coasted to victory with 80 balls to spare in the first match of the three-game rubber in Colombo but they were left with a tall task when a magical leg-spin display from Wanindu Hasaranga (3-37) left them 193-7 after 35.1 overs in pursuit of 275-9.

Chahar, who has a highest first-class score of 57 not out, rode his luck at times and found a willing ally in fellow tailender Bhuveneshwar Kumar (19 not out), before swiping the winning runs through midwicket off Kasun Rajitha from the first ball of the final over.

Chahar also took 2-53 with the ball and began in a more customary new-ball partnership with Kumar, although the first-wicket stand had reached 77 by the time leg-spinner Yuzvendra Chahal (3-50) had Minod Bhanuka held at midwicket for 36.

Bhanuka Rajapaksa was then caught behind first ball off a Chahal top-spinner, although patient half-centuries by opener Aviskha Fernando (50) and Charith Asalanka (65) – both dismissed by Kumar (3-54) – were the foundations of a solid Sri Lanka innings. Chamika Karunaratne provided some welcome late acceleration with 44 not out from 33 balls.

Hasaranga bowled the dangerous Prithvi Shaw with a googly and trapped stand-in India skipper Shikhar Dhawan lbw for 29, Ishan Kishan having dragged on a Rajitha long-hop.

Manish Pandey was unfortunate to be run out for 37 when Dasun Shanaka tipped a shot back down the ground onto the stumps from Suryakumar, who looked like playing a decisive hand before bring trapped lbw by Lakshan Sandakan for 53.

Sri Lanka captain Shanaka also removed the dangerous Hardik Pandya for nought, with his brother Krunal bowled by a beauty from Hasaranga to clear the way for Chahar to set up a grandstand finish. 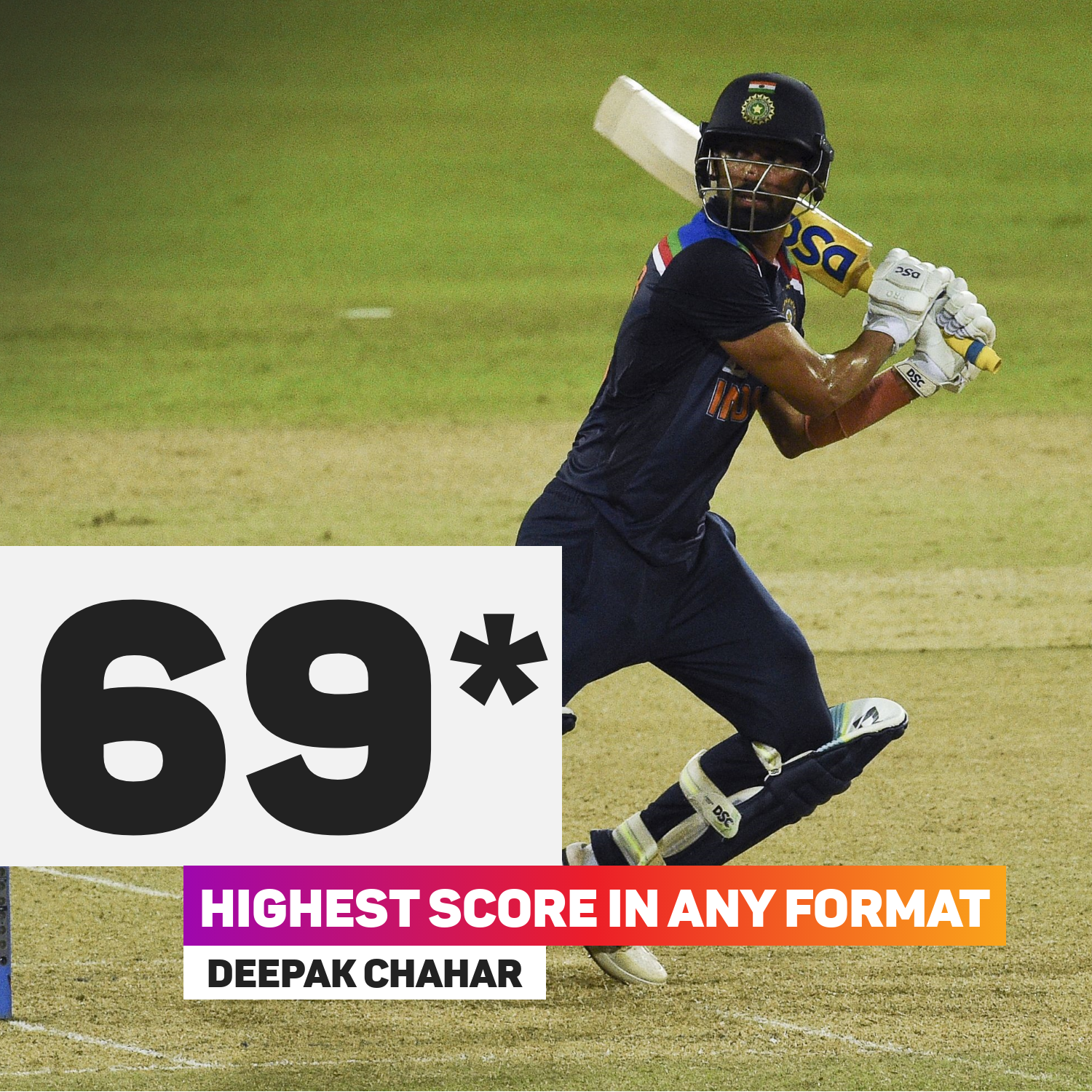 India are now undefeated in their past 12 ODI series against Sri Lanka, winning 10, but they were left in the unusual position of needing a significant lower-order contribution. Chahar's undefeated 69 is the second-highest score by anyone in this format for his country batting at number eight or lower.

"Only one thing was going on in my mind: this is the kind of innings I've been dreaming of," he beamed while being named player of the match.

Hasaranga dearly deserved to finish on the winning side, but the difference between his efforts and those of Sri Lanka's other frontline bowlers was significant. The wrist-spinner's economy rate of 3.7 was not backed up by Rajitha (7.4), Sandakan (7.1) or Dushmantha Chameera (6.5), who went wicketless in his 10 overs. Shanaka contributed 1-10 from his three overs, leaving himself curiously under-bowled.

Runs have been hard to come by for Sri Lanka in T20 cricket of late, while they have struggled against India in the format.

Opener Avishka Fernando made 76 as Sri Lanka were able to seal just their second victory in 11 completed ODI games.