Kemba Walker has been traded to the Thunder, with the Celtics giving up a first-round pick to lose his hefty contract.

The Boston Celtics have reportedly agreed to trade Kemba Walker and a 2021 first-round draft pick to the Oklahoma City Thunder in exchange for former favourite Al Horford.

Walker arrived in Boston in 2019 in a sign-and-trade deal with the Charlotte Hornets that would see the point guard paid a mammoth $140.8million over four years.

The Celtics made that move after losing Kyrie Irving and Horford in free agency.

Horford got a four-year, $97m contract with the Philadelphia 76ers but was traded to the Thunder 17 months later.

In return, the Celtics get Horford, Brown and a 2023 second-round pick in Brad Stevens' first trade since leaving his role as head coach to become president of basketball operations.

The move crucially allows Boston to get off Walker's contract, which still has $73.7m owed. Horford's deal has a slightly more palatable $53.5m remaining.

For the Thunder, who have already traded the majority of their assets for picks, it means they will have three selections in the first round of this year's draft. 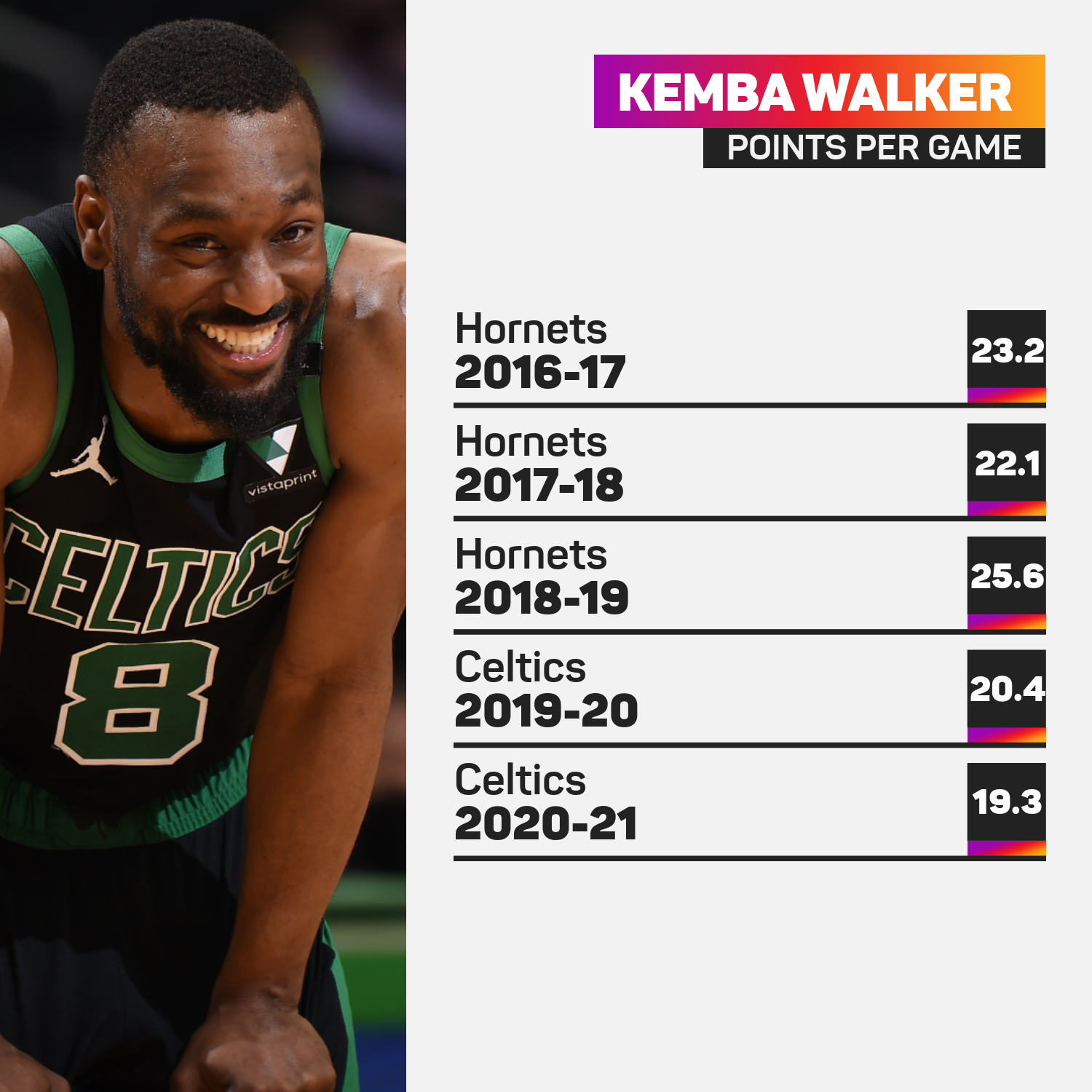 Walker started all 82 games in his final year in Charlotte, contributing 25.6 points per game.

However, in Boston, he dealt with repeated knee injuries, scoring 20.4 points in his first season and 19.3 in his second, which concluded with a 4-1 playoff defeat to the Brooklyn Nets. Walker played three games and averaged 12.7 points.

He did improve after joining Oklahoma City but was then sat for the final two months of the season as the team tanked, handing greater opportunities to fellow big man Brown.

Brown averaged 8.6 points and 8.9 rebounds in 21.4 minutes per game in his only season with the Thunder. He ended the year with a career-high 24 points against the Los Angeles Clippers.

Kemba Walker has been traded to the Thunder, with the Celtics giving up a first-round pick to lose his hefty contract.

After Boston's exit from the NBA playoffs, president of basketball operations Danny Ainge has announced he is retiring.

The Phoenix Suns blew the Los Angeles Lakers out of the water in the first half but lost Chris Paul to another shoulder injury.

NBA playoffs 2021: Celtics pair ruled out of Game 5 with Nets looking to close out series

The Boston Celtics' hopes of keeping their NBA playoffs series against the Brooklyn Nets alive have been dealt a blow.

Kyrie Irving condemned the actions of an unruly fan during the Game 4 clash between the Brooklyn Nets and Boston Celtics.

The Brooklyn Nets and their 'big three' starred as the Phoenix Suns trumped the Los Angeles Lakers on Sunday.

The Boston Celtics ended a run of back-to-back losses to win Game 3 against the Brooklyn Nets on Friday.

Anthony Davis hit back with 34 points, 10 rebounds, three blocks and seven assists as the Los Angeles Lakers squared up their series.

The Brooklyn Nets lead 2-0 in their NBA playoffs first round against the Boston Celtics after winning 130-108 on Tuesday.

Steve Nash fronted the media ahead of Tuesday's Game 2 against the Boston Celtics.