Busy offseason has quickly made Bulls competitive against anyone

The Chicago Bulls may now have loftier ambitions after a superb start following a busy offseason.

Heading into the 2021-22 season, the Chicago Bulls were viewed as a team that could possibly contend for a play-in game, and maybe, just maybe even secure a postseason berth in the Eastern Conference.

Sure, no team compiled more losses over the previous four seasons than the Bulls' 199 defeats, but executive vice president of basketball operations Arturas Karnisovas had a busy offseason constructing a lineup that on paper looked like it had the pieces to compete in the East.

The biggest questions on the onset of the season were how long it would take the new additions to build chemistry and how soon until they could become competitive.

The Bulls have quickly answered those questions.

Chicago have opened with six victories in their first seven games and are coming off two signature wins – Saturday's victory over the previously undefeated Utah Jazz and Monday's 19-point comeback on the road against the Boston Celtics.

Karnisovas began building what he hoped would be a playoff team at last season's trade deadline by adding two-time All-Star center Nikola Vucevic, but the Bulls ultimately stumbled down the stretch as Zach LaVine missed 11 games in April and May while in the league's health and safety protocols.

The roster overhaul continued in the offseason with the acquisition of four-time All-Star DeMar DeRozan and point guard Lonzo Ball in separate sign-and-trade deals, and now with multiple scoring options, an offense that moves the ball and an improved defense, the Bulls are a complete team. Their net rating of 9.6 trails only the Miami Heat and the Jazz – the league's only other 6-1 teams.

For the past few seasons, the Bulls' offense revolved around the play of LaVine. A first-time All-Star in 2020-21, LaVine accounted for 19.6 per cent of Chicago's scoring over the past three seasons – the eighth-highest percentage for any player with at least 4,000 points scored for a single team over that span.

He now has a running mate in DeRozan to help shoulder the burden, and the early returns have been fantastic.

With LaVine nursing a left thumb sprain on his non-shooting hand, DeRozan has stepped up offensively, producing back-to-back 30-point games against the Jazz and the Celtics.

His game compliments with the Bulls' offense, as he is able to score from mid-range while relying on his team-mates to knock down threes. DeRozan is shooting 54.1 per cent on 37 jumpers attempted between 10 and 15 feet, and his 21 field goals made from the elbow are the most in the league.

He played a big part in Chicago's frantic fourth-quarter comeback win over the Celtics, and he has been a huge contributor down the stretch in the first few weeks of the season.

His 50 fourth-quarter points trail only Giannis Antetokounmpo's 51 for the most in the league, and he has been clutch at the foul line in the final period, making 12 of 13 free throws. LaVine has been slightly better from the line in the fourth, making all but one of his 17 attempts.

DeMar has been in attack mode! @Calamos | #BullsNation pic.twitter.com/8FZgaiXACB

Getting to the foul line has been a major point of emphasis this season under second-year Bulls coach Billy Donovan, and they have been succeeding.

Cutting down on turnovers is another area the Bulls were looking to clean up after ranking 27th in the league last season at 15.1 per game, and again, they have seen the biggest improvement in the NBA. Averaging 2.2 fewer turnovers per game this season, Chicago rank third in the league at 12.9 per game and have the league's seventh-lowest turnover rate at 11.9 per cent. 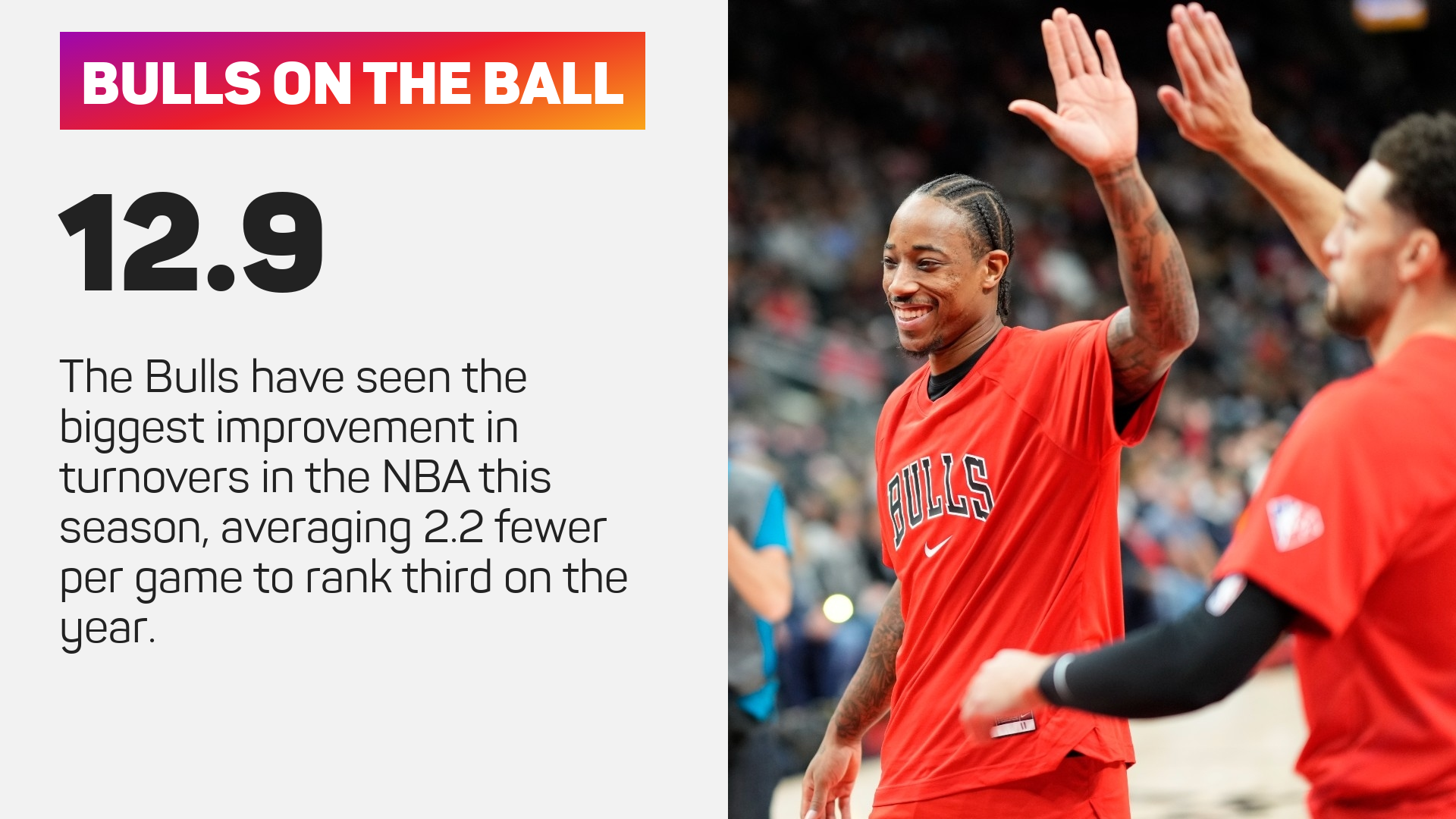 LaVine has been one of the biggest factors in the team's improvement in protecting the ball, averaging 2.3 turnovers per game after averaging 3.4 or more in each of the previous three seasons.

For the second year in a row, LaVine leads the Bulls in assists, and while 4.9 per game does not sound all that special, it is the way that the team have been distributing the ball that has been encouraging.

With Ball averaging 4.4 assists, Vucevic averaging 4.3 assists and DeRozan at 4.0 per game, the Bulls and the Indiana Pacers are the only two teams to have at least four players averaging at least 4.0 assists.

The Bulls' biggest acquisitions of this calendar year – DeRozan, Ball and Vucevic – are extremely versatile, with each averaging better than 12.0 points, 5.0 rebounds and 4.0 assists. They are the only team to have three players each reaching those numbers this season, and the Bulls have not had a trio of players with those stats since 1994-95, when Hall of Famers Michael Jordan, Scottie Pippen and Toni Kukoc did it.

While Ball and Vucevic are finding roles in a balanced offense, the two of them along with another offseason acquisition have helped shore up a defense that was not all that formidable a year.

Hours after the signing of Ball, the Bulls also added free agent Alex Caruso. While the Caruso signing did not grab as many headlines as the additions of Ball and DeRozan, the former champion with the Los Angeles Lakers is also making an immediate impact.

Caruso's 18 steals lead all bench players this season, and his average of 4.52 steals per 48 minutes is the second-highest rate in the league behind only Paul George at 4.66 among the 142 players with at least 175 minutes.

While Caruso is hounding opposing ball-handers, Ball is frustrating opposing shooters, averaging 1.14 blocks – the second-best by a point guard behind the Sacramento Kings' Tyrese Haliburton at 1.29 per game.

Led by the offseason additions, Chicago's revamped disruptive defense is averaging 8.86 steals per game (up from 6.69 per game a year ago, when they were third-worst) and ranks fourth in blocks at 6.29 per game (an improvement from 4.22 per game in 2020-21, when they ranked 27th). It is also second in points per game off turnovers at 21.6 after ranking 26th last season with 14.5 per game.

Over the weekend, the Bulls put the rest of the league on notice that their defense should be taken seriously as they stymied the Jazz, holding them to season lows of 38.0 per cent shooting and 99 points – nearly 13 points fewer than their season average. That was one of three times already Chicago have limited their opponents to 40 per cent shooting or less after having four such games in a 72-game schedule last season.

It is obviously early, and the Bulls have a brutal schedule over the next two and a half weeks (their opponents' winning percentage of .609 through November 21 is the highest in the league), but Chicago have proven they have the makeup both offensively and defensively to compete with anyone.

While the narrative a few weeks ago for the Bulls was whether the team could make the playoffs, the franchise is now targeting much loftier goals.

The Golden State Warriors avenged Tuesday's loss to the Phoenix Suns by beating them 118-96 on Friday.

LeBron James fumed at the handling of his false positive test this week, slamming the NBA's process.

Curry after reversing Suns defeat: We've learned how to beat a great team

The Golden State Warriors bounced back from Tuesday's loss to the Phoenix Suns with victory over them in Friday's top-of-the-west clash.

Roma boss Jose Mourinho's first league meeting with Inter since leaving the club more than a decade ago ended in a 3-0 loss on Saturday.

He looked to be heading for pole position in Saudi Arabia, but a crash on the final corner proved costly for Max Verstappen.

Liverpool striker Divock Origi came off the bench to score a dramatic stoppage-time winner against Wolves on Saturday afternoon.

Stefano Pioli believes Liverpool could be susceptible at the back when they face Milan in a key Champions League match.

Lionel Messi has had a long-running rivalry with Cristiano Ronaldo, but the Paris Saint-Germain man has only ever been focused on himself.

Real Betis took all three points at Camp Nou on Saturday, handing Xavi his first defeat since returning to Barcelona as coach.

Wolves were left heartbroken at Molineux after coming close to a goalless draw with Liverpool, only for Divock Origi to strike late.

Chelsea suffered a 3-2 defeat against West Ham, with Mason Mount pointing to fatigue as an explanation for the individual errors made.

Milan 2-0 Salernitana: Kessie on target as leaders cruise to victory

Milan made light work of Salernitana as they claimed a first home win in all competitions since October.

Bowen: West Ham never know when we are beaten