Nick Kyrgios described Novak Djokovic as "a tool" last year, but their once frosty relationship has been replaced by unexpected warmth.

Nick Kyrgios threw in an underarm serve in the second game of his Australian Open campaign, before tossing in a curveball in the post-match news conference.

Speaking after his 6-4 6-4 6-3 win over an outmatched Liam Broady on John Cain Arena, Kyrgios proposed he might play doubles with Novak Djokovic in the future.

Australian Kyrgios has dramatically changed his tune on the Serbian, but not in the way many have altered their perspective following recent events.

Djokovic was deported from Australia in the hours before the Australian Open got under way, a consequence of his own failure to get a COVID-19 vaccine and seemingly mixed messages from authorities before a court settled the kerfuffle.

His behaviour in December after a positive COVID-19 test has been widely criticised, and the reputation of arguably the greatest tennis player of all time has taken a battering in the past fortnight.

Kyrgios recently observed the treatment of Djokovic, a nine-time champion of the Melbourne Park grand slam, had been "really bad" and said it was important to "do better" by the 20-time slam winner. 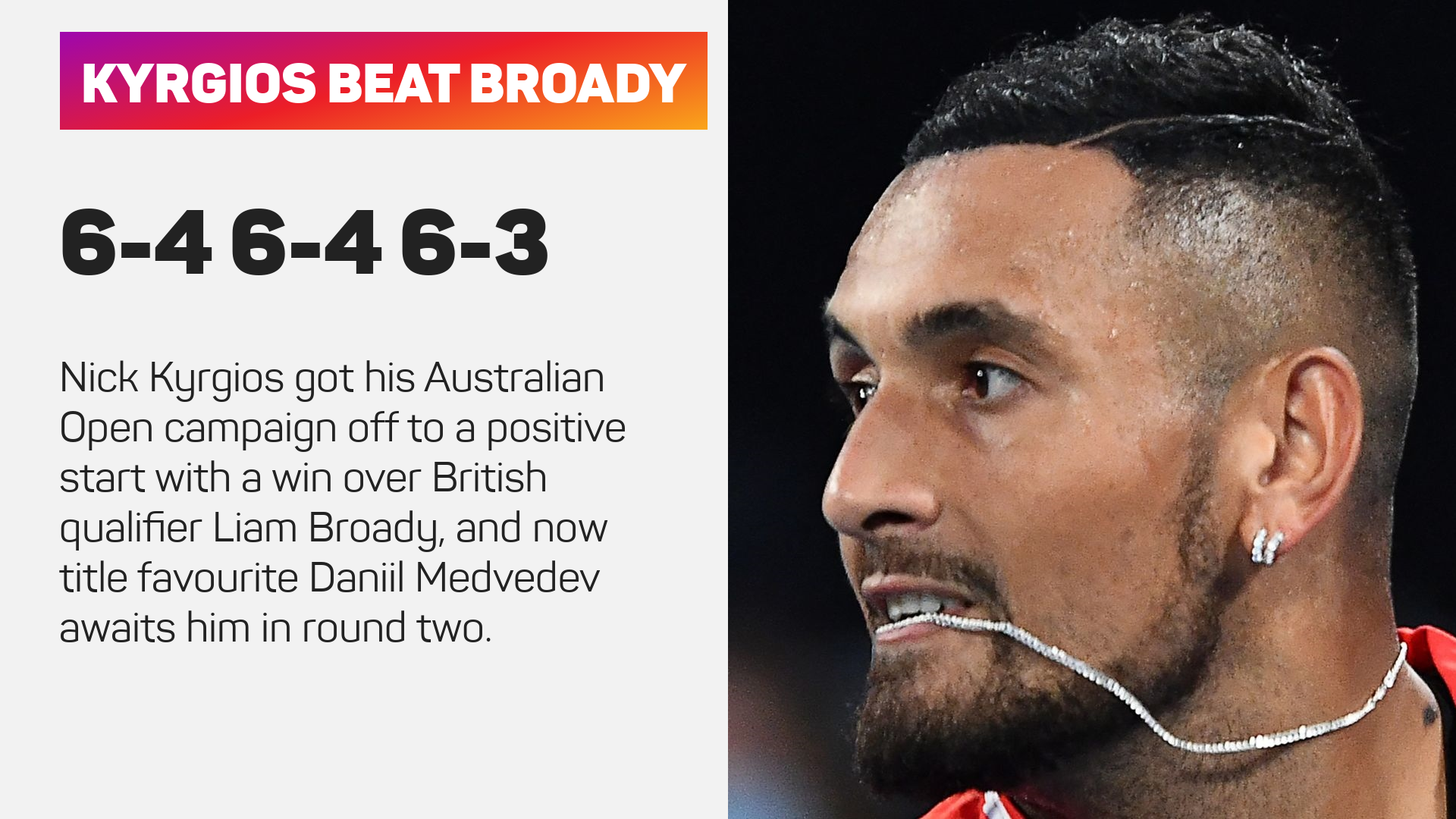 The 26-year-old from Canberra has emerged as an unlikely cheerleader for the player he described as "a tool" and "a very strange cat" last February, after Djokovic was reported to have requested improved quarantine accommodation on arriving in Australia.

Now Kyrgios is revelling in his apparent sudden popularity in Serbia, where Djokovic's banishment from Australia was greeted with anger and dismay.

"I mean, it's great," Kyrgios said of his new standing. He then turned his focus to why he has stood up for his new friend.

"Obviously me and Novak have had some, I guess, differences in the past. But whether it was Novak or someone else, I would have done the same thing," he said.

"I didn't do it because he was Serbian. If it was another player in that scenario, I would have stood up for what I think was right.

"I think it was just coincidentally it was Novak, and, you know, it was quite a story. But we've got a bit of a bromance going on now, so I'm not going to complain.

"I think I'm going to ask him to play doubles somewhere."

It remains to be seen where this might next prove possible. Djokovic might find he needs a vaccination to play the French Open and US Open this year, amid reports an increasing number of tournaments will insist on players being immunised as a condition of entry.

Rafael Nadal beat Jordan Thompson to bring up a 106th win at the French Open, setting a new record for victories at a single grand slam.

Rafael Nadal's bid for a 14th French Open title got under way on Monday, as the Spaniard defeated Jordan Thompson with ease.

French Open: Swiatek will be fired up for Wimbledon without ranking points

Naomi Osaka suggested she will not play at Wimbledon without ranking points, but Iga Swiatek says she will be there regardless.

French Open: Defending champion Krejcikova out after being stunned by Parry

Last year's winner at Roland Garros, Barbora Krejcikova, is out at the first-round stage this time, losing in three sets to Diane Parry.

After Wimbledon was stripped of ranking points for 2022, Ukraine's Lesia Tsurenko hit out at the ATP and WTA over the decision.

Wimbledon has been stripped of ranking points by the WTA and ATP, and Naomi Osaka has suggested she may skip the grand slam as a result.