Novak Djokovic, who has not won the event since 2015, leads a youthful field at the ATP Finals, which start in Turin on Sunday.

Novak Djokovic is aiming to match Roger Federer's record haul of six ATP Finals titles, though defending champion Daniil Medvedev will be out to deny the Serbian.

Djokovic has secured a record seventh year-ending world number one ranking, and gained vengeance on Medvedev for his US Open heartbreak by defeating the Russian at the Paris Masters earlier this month.

That win brought up a record 37th ATP 1000 title for Djokovic, who surpassed Rafael Nadal in that regard. The Spaniard, along with fellow great Federer, is not competing at these Finals.

While Nadal and Federer will be missed as the tournament makes its debut in Turin after 12 editions at London's O2 Arena, it provides Djokovic – who lost to eventual runner-up Dominic Thiem in the semi-finals last year – with a good chance of matching the latter's tally of Finals wins.

Medvedev, the second seed, seems the most likely candidate to go up against Djokovic, though his first challenge is to negotiate the Red Group, which also includes 2018 champion Alexander Zverev, debutant Hubert Hurkacz, who defeated Federer at Wimbledon, and Matteo Berrettini, who will have the backing of the Italian crowd.

Djokovic, meanwhile, has to get past Andrey Rublev, Casper Ruud and 2019 champion Stefanos Tsitsipas. It is certainly no foregone conclusion, as the next generation of stars catch up with one of the game's greats. 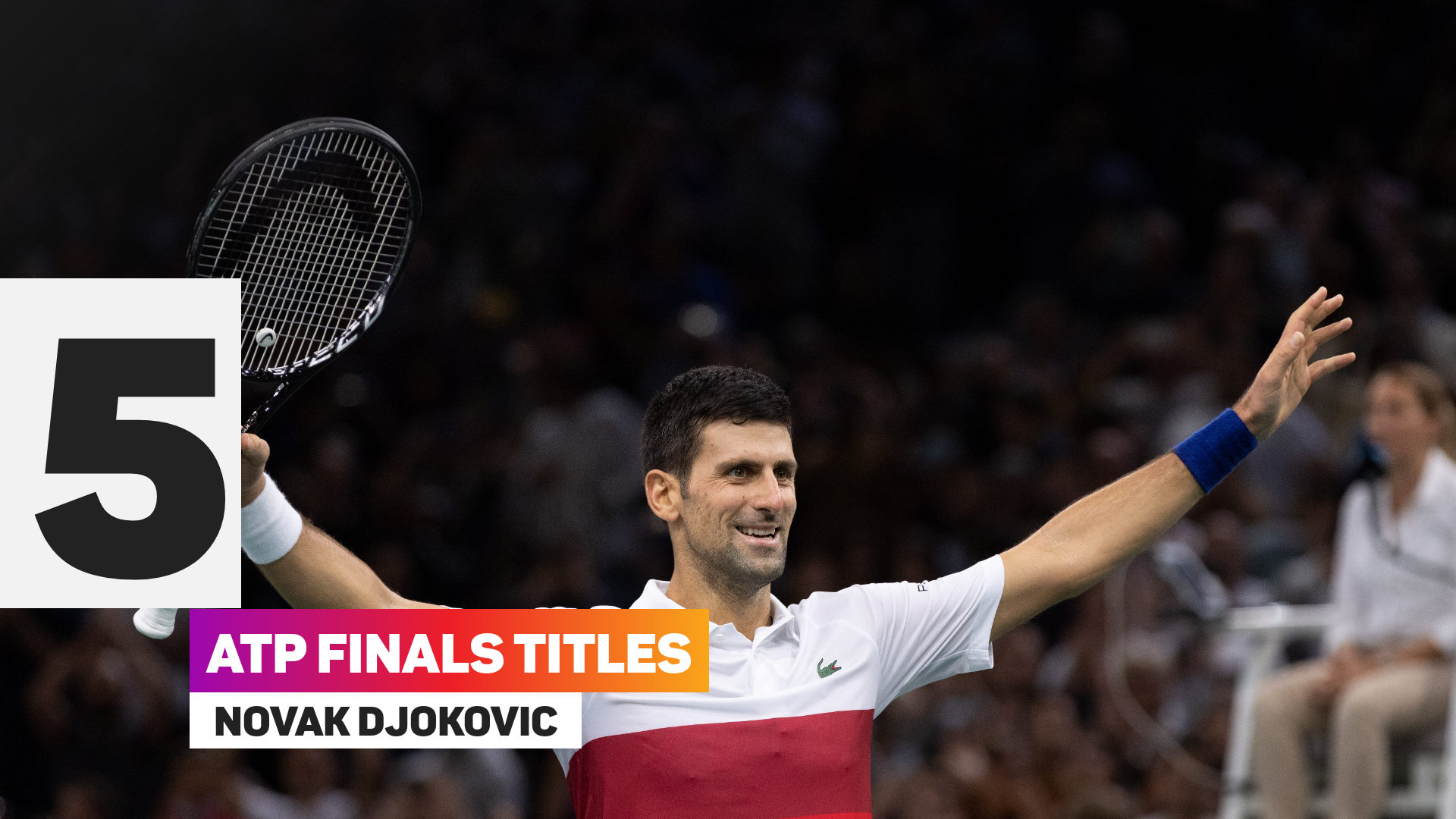 It is Medvedev who gets the tournament started, taking on Hurkacz on Monday. The world number two has gone from strength to strength since winning last year's season-ending showdown by beating Dominic Thiem 4-6 7-6 (7-2) 6-4.

Medvedev has won four titles, including that crucial maiden grand slam, in 2021, with the 25-year-old reaching a further two finals, losing to Djokovic at the Australian Open and Paris Masters.

"You have to practise with other players," said Medvedev. "I think if you think, 'Oh my, he's going to see my weak side', your life in tennis will be too tough. You'd only be able to play with your sparring partner.

"You also need to play with the best players in the world to improve. The level of our matches will always be high, but you will try to adapt your style.

"I tried to re-watch the Australian Open final for the US Open final, and Novak watched the US Open match to change things [in Paris].

"We both did the right things [in Paris], but he played better on the day. You know nothing will ever come easily and you need to fight throughout the match."

Hurkacz will present a stern test. The Pole is 36-20 on the season having won three titles, while world number three Zverev edged out Djokovic in the 2018 finale. Berrettini, meanwhile, is making his second appearance at the Finals and will be eager to make home advantage count. 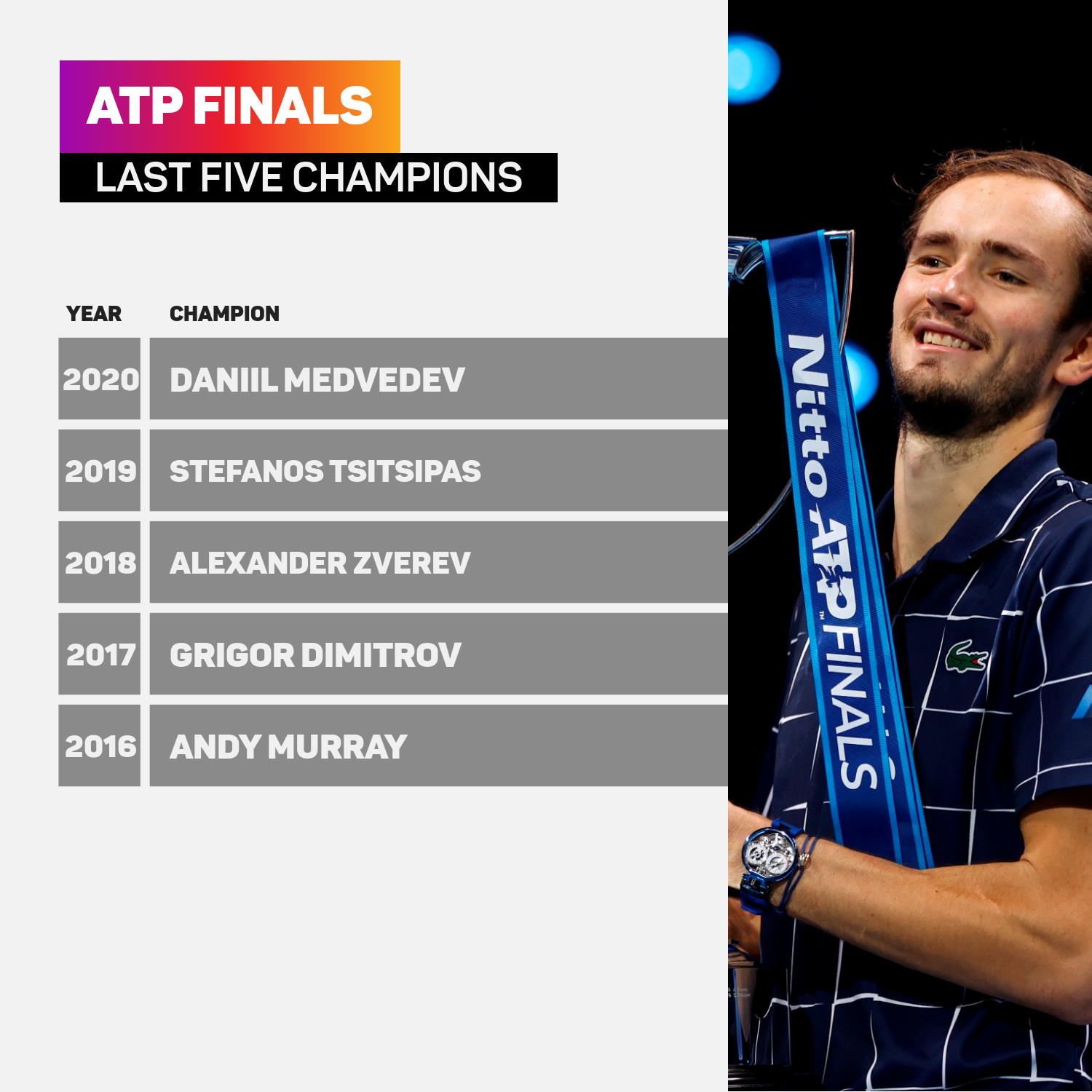 Tsitsipas remains the only player to win both the NextGen and ATP Finals titles, but he has had to settle for something of a frustrating season. The Greek, ranked fourth in the world, has claimed two Tour victories, including his first Masters triumph, in Monte Carlo.

However, the Greek threw away a two-set lead in his first appearance in a grand slam final, as Djokovic fought back to clinch the French Open (his 19th major title, a tally he has now extended to 20).

The pair will meet again in the Green Group, though first up for Tsitsipas is Rublev, who he beat in Monte Carlo, though the Russian has won 48 matches in 2021.

"Overall, I am happy where I stand and I want to take an extra step and aim even higher next year. That will require new fresh goals. Working to find where the one per cent lies, or the five per cent, where I can benefit from it," Tsitsipas explained.

Ruud, the remaining member of the Green Group, should not be underestimated. The 22-year-old has won five titles this season and is the first Norweigian to appear at the event.

Ash Barty had already had a stellar year, winning the Wimbledon title, and now the Australian tennis superstar has announced her engagement.

Peng Shuai was pictured talking to IOC president Thomas Bach in a video call on Sunday, but the WTA remains concerned about her welfare.

Lewis Hamilton has won the past two races to narrow Max Verstappen's lead, but the Dutchman can claim the title in Saudi Arabia on Sunday.