The All Blacks got an underwhelming 2020 out of their system with a 102-0 win over a Tonga side featuring 13 debutants.

Will Jordan helped himself to a five-try haul, while scrum-half Brad Weber ran in a hat-trick as the All Blacks reached a century of points for the sixth time in their history.

They are the only country to have achieved the feat more than once and it was the second time Tonga have found themselves on the receiving end.

Damian McKenzie got the scoring underway with a second-minute try and the full-back went on to claim three assists as nine All Blacks crossed overall.

Dalton Papalii's first-half double, along with Jordan and Weber getting into their work meant it was 43-0 at half-time and worse was to follow for the visitors, who were without the bulk of their northern hemisphere players due to COVID-19 travel restrictions and named 13 debutants.

Luke Jacobson, Richie Mo'unga, Rieko Ioane and Patrick Tuipulotu all got in on the act in the second half, marking an emphatic start to their 2021 schedule having won only half of their six 2020 outings. 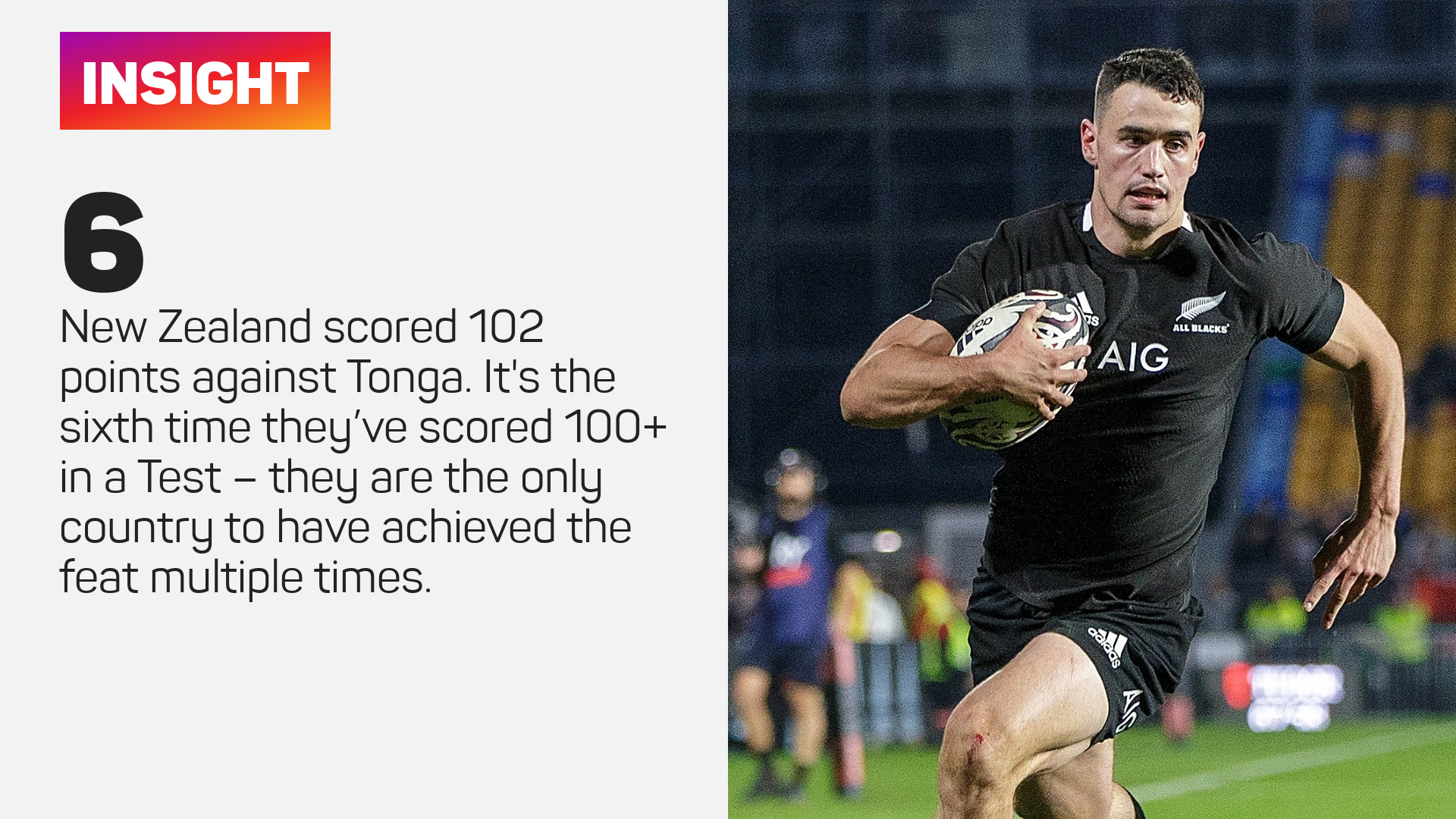 Mo'unga landed seven conversions before making way for Beauden Barrett, back from his sabbatical in Japan.

Barrett added the extra for a fourth and final time after the hooter when George Bridge compounded Tonga's misery by bringing up three figures – his try a reward for a tireless performance where the wing made seven clean breaks.

The worsening COVID-19 situation in the United Kingdom has been cited as a factor in Australia and New Zealand withdrawing from the RLWC.

Reece scores hat-trick as All Blacks run riot against Fiji

Richie Mo'unga and Sevu Reece picked apart Fiji as New Zealand completed their Steinlager Series with a 60-13 rout in Hamilton.

Hooker Dane Coles was only on the field for half an hour against Fiji but that was enough time to score four tries.

The All Blacks got an underwhelming 2020 out of their system with a 102-0 win over a Tonga side featuring 13 debutants.

After bowling out India for 170, New Zealand clinched victory over India in the final hour of the reserve day at the Ageas Bowl.

India edge ahead after Williamson holds New Zealand together

India will start the sixth and final day of the World Test Championship with a slender lead after bowling New Zealand out for 249.

A draw would appear to be on the cards in Southampton after a second day of play was lost due to poor weather.

New Zealand took charge of the World Test Championship final, with Kyle Jamieson leading the way by taking 5-31 to dismiss India for 217.

India enjoyed a recovery led by Virat Kohli, but a foreboding forecast suggests a likely draw in the World Test Championship final.

English summer rain meant India and New Zealand could not get started as they prepared to battle out the World Test Championship final.