China added two more golds to their tally on Saturday, while Jamaica earned a clean sweep of medals in the women's 100m race showpiece.

Lyu Xiaojun became the oldest Olympic champion in weightlifting at the age of 37 to help tighten China's grip on top spot in the Tokyo 2020 medal table at the end of Saturday's action.

That victory for Lu in the 81 kilograms category led to China's fifth weightlifting gold of this year's Games and broke the record previously held by Rudolf Plyukfelder, who was 36 when winning gold at Tokyo 1964.

China also came out on top in the women's windsurfer – RS:X event after a tense three-way battle which saw Yunxiu Lu edge out Charline Picon and Emma Wilson of France and Great Britain respectively.

Japan remain second in the overall medal standings, despite failing to add to their 17 golds, which allowed the USA to close the gap after a successful day in the pool.

Caeleb Dressel won the 100m butterfly to become only the second man to win that and the 100m freestyle at the same Olympic Games after compatriot Mark Spitz in Munich in 1972.

The Russian Olympic Committee won their solitary gold for the day in fencing, triumphing in the women's sabre team final with a narrow victory over France to remain fourth, while Australia stay fifth thanks to Kaylee McKeown, who won the women's 200m backstroke to add to her 100m backstroke triumph.

Further down the list, Jamaica earned a clean sweep of medals in the women's 100m as Elaine Thompson-Herah pipped compatriots Shelly-Ann Fraser-Pryce and Shericka Jackson to retain her crown as the world's fastest female.

Other notable gold medals were awarded to Team GB in the triathlon mixed relay and Poland in the 4 x 400m mixed relay, with both of those events being added to the Olympic schedule for the first time in Tokyo.

It was also a day to remember for Sweden as Daniel Stahl took gold in the men's discus, finishing just ahead of training partner Simon Pettersson to complete their nation's first one-two finish in an event at the summer Games since the men's 10,000m race walk at London 1948. 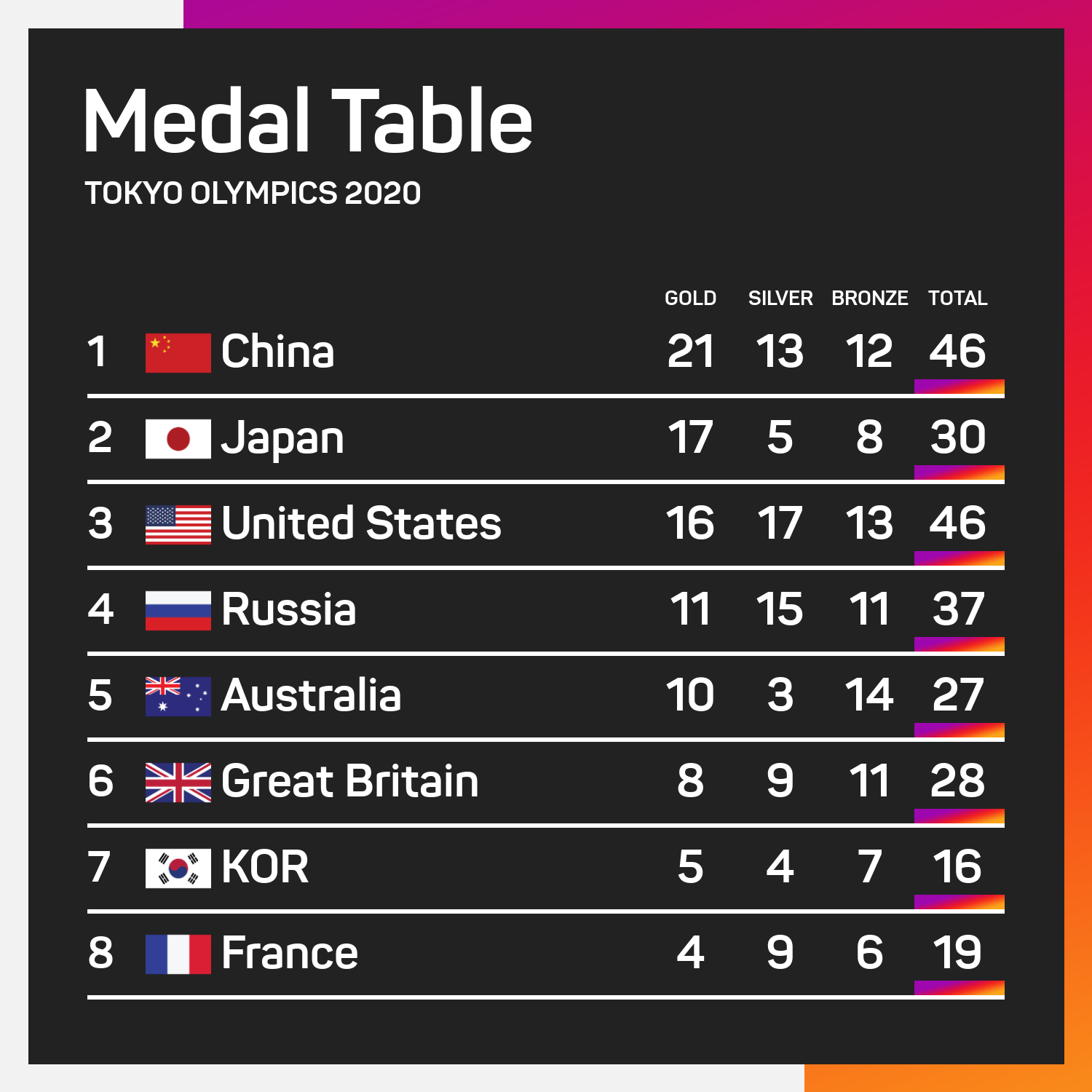 The Badminton Association of Malaysia (BAM) revealed they had gone to the extent of offering Goh Jin Wei overseas expertise to treat her prolonged stomach ailment, but the national women’s singles shuttler just could not continue playing professionally.

Former two-time world junior champion Goh Jin Wei announced her shock retirement on Monday, barely a week after she was named as part of the upcoming Uber Cup squad by the Badminton Association of Malaysia.

The Badminton Association of Malaysia (BAM) decided to break rank and give their junior shuttlers maximum exposure after naming a young squad for the upcoming Sudirman Cup and Thomas & Uber Cup.

National coaching director Wong Choong Hann said Japan would be Malaysia’s biggest threat at the upcoming Sudirman Cup after the team was drawn alongside the 2019 finalists, England, and Egypt.

Malaysian badminton were dealt a shock on Monday after national women's doubles shuttler Chow Mei Kuan tendered in a shock resignation to the Badminton Association of Malaysia (BAM).

Sudirman Cup: Wooi Yik confident of getting result against Japan

Soh Wooi Yik likened the upcoming Sudirman and Thomas/Uber Cup to the Olympics, highlighting the importance of being mentally present as the national contingent prepare for their first test on Monday.