Wales 0-4 Denmark: Dolberg at the double as Danes run riot in Amsterdam

Denmark built on their momentum from the group stage as Kasper Dolberg's double helped them thrash Wales and progress to the quarter-finals.

Kasper Dolberg starred on his former stomping ground in Amsterdam as Denmark stormed to a 4-0 victory over Wales to progress to the Euro 2020 quarter-finals.

In for the injured Yussuf Poulsen, ex-Ajax striker Dolberg became the first Denmark player to score twice in a Euro knockout game since Henrik Larsen in 1992 with two clinical finishes.

With the backing of a partisan crowd at the stadium where the absent Christian Eriksen made his name, Denmark hit the front midway through the first half before Dolberg – on his first start of the tournament – doubled his tally shortly after the break.

Mathias Jensen, Martin Braithwaite and Joachim Andersen all hit the woodwork, though those near-misses mattered little when Joakim Maehle made sure of an emphatic Danish victory.

Wales' misery was then compounded with Harry Wilson's harsh sending off and Braithwaite's strike in the fourth minute of added time. 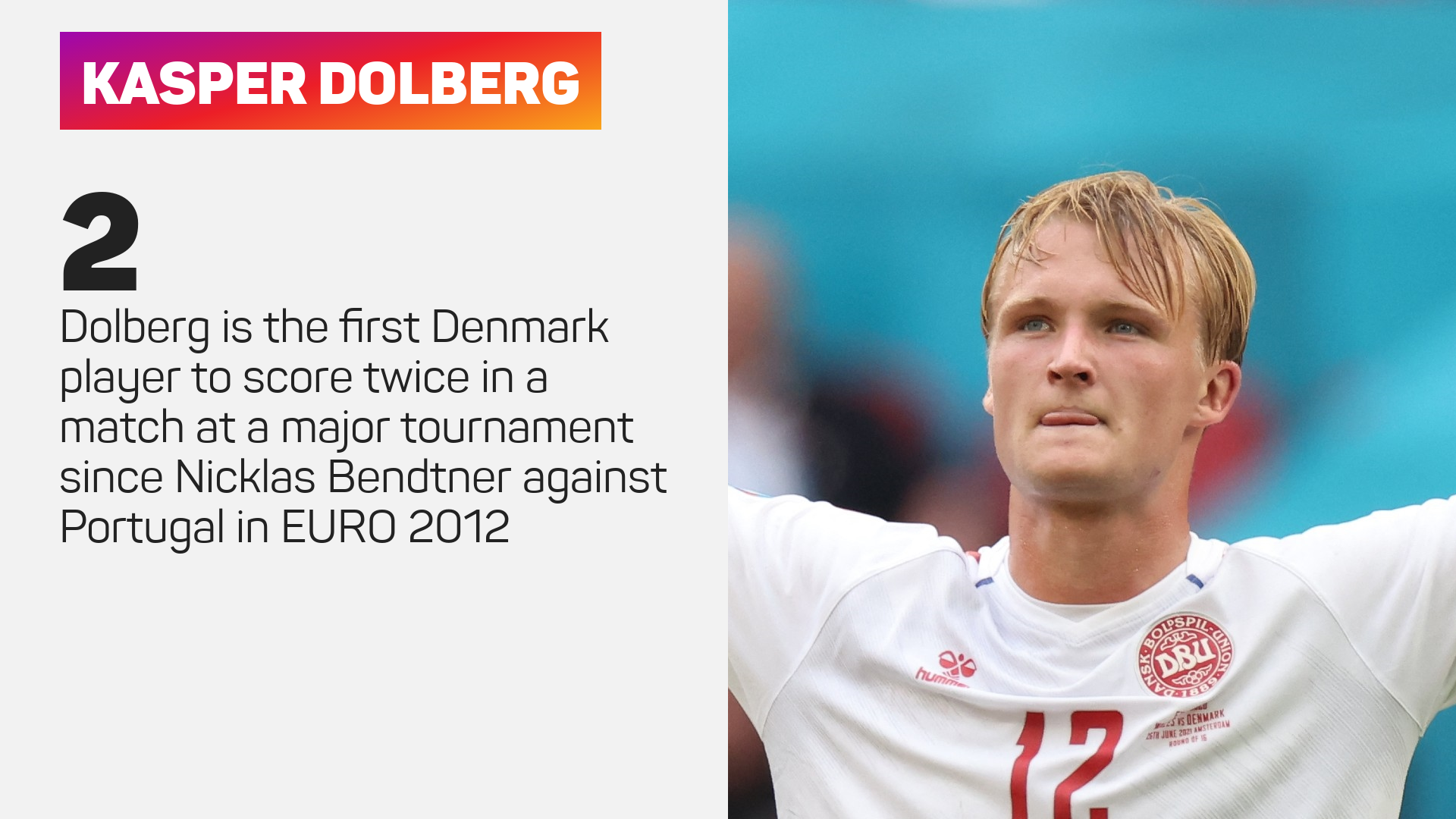 Gareth Bale arrowed wide as Wales started brightly, but a tactical switch from Kasper Hjulmand smothered the winger, and in the 27th minute, it was Denmark who struck.

Mikkel Damsgaard injected pace into a patient team move which culminated in Dolberg exquisitely picking out the bottom-right corner from 20 yards out.

Dolberg almost followed up with a second within five minutes, but Danny Ward made an outstanding stop from the forward's close-range flick.

Wales lost Connor Roberts to injury, and it was his replacement Neco Williams who was at fault for Denmark's second three minutes after the break.

Williams' dreadful clearance fell to Dolberg, who drilled into the bottom corner – the goal standing despite Wales' appeals for a foul in the build up.

Substitute Jensen was inches away from one of the goals of the tournament when his looping effort – which may well have been intended as a cross – clipped the post.

Braithwaite and then Andersen failed to finish into a gaping goal, but Maehle made no mistake when he lashed home for the second time in as many games after 88 minutes.

Maehle was involved again when he drew a foul from Wilson, who was harshly dismissed, but Braithwaite had the final say as his goal was given on a VAR check, and Denmark marched into a last-eight tie with the Czech Republic or the Netherlands in supreme form.

What does it mean? Hjulmand invoking the spirit of 1992

Wherever Eriksen is watching, he will surely be full of pride at what his team-mates have gone on to achieve since the incident which saw the football world stand still in shock 14 days ago in Copenhagen.

Denmark, champions at Euro 1992, became the first team in European Championship history to reach the knockout stages of the competition having lost their first two group games, and Hjulmand seems to have tapped into something special which the vociferous Danish support – in full voice in Amsterdam – are fully embracing.

Luck has certainly not been on Denmark's side, even without the obvious case. They were without main striker Poulsen, shorn of right-back Daniel Wass, while key duo Thomas Delaney and Simon Kjaer also sustained injuries, yet they nevertheless look like a team capable of mounting a serious challenge.

Dolberg burst onto the scene with Ajax, starring in their run to the Europa League final in 2016-17, and though he now plies his trade in France with Nice, it seemed like something of a homecoming for the 23-year-old.

Since the start of 2019, only Eriksen (11) – another Dane to have lit up Johan Cruijff ArenA during his time at Ajax – has scored more goals for Denmark than Dolberg (eight), who is also the youngest player to score for the nation in the knockout stages of the European Championships.

Wales had travelled from Baku to Rome and onto Amsterdam, and it looked like the miles had caught up with them.

They are the first team to receive two red cards in a single edition of the European Championships since Russia and Switzerland in 2004, while star men Bale and Aaron Ramsey were hardly involved as Robert Page's team mustered just one effort on target, with their opponents managing eight.

While Wales will lick their wounds and turn their attention to qualifying for the 2022 World Cup, Denmark will regroup and recover ahead of a trip to Baku, where either the Netherlands or the Czech Republic will face them in seven days' time.

UEFA handed down a fine to the FA for the behaviour of England fans during their historic Euro 2020 semi-final win over Denmark.

Henderson calls for 'one more big push' from England

Jordan Henderson has paid tribute to his team-mates for showing composure after conceding their first goal of Euro 2020.

A spectator aimed a laser at Denmark goalkeeper Kasper Schmeichel as he prepared to face Harry Kane's penalty in the Euro 2020 semi-final.

Martin Braithwaite has criticised the penalty decision that led to Denmark being eliminated from Euro 2020 by England.

Kane: 'For once it went England's way'

Harry Kane spoke on behalf of the nation when he said finally it went England's way after the 2-1 semi-final win.

Arsene Wenger is currently the FIFA's Chief of Global Football Development and said the VAR should have intervened in the Euros semi-final.

Denmark must be proud of their team's achievements at Euro 2020, says Kasper Hjulmand, who is sure success will come in the future.

Sterling on England's extra-time winner: It was a clear penalty

England will celebrate their narrow victory over Denmark before focussing on the Euro 2020 final, according to Raheem Sterling.

Harry Kane's extra-time goal against Denmark fired England to their first major tournament final in 55 years, with Italy up next at Wembley.

Schmeichel's Wembley heroics were not enough this time, but Denmark must still be celebrated

Kasper Schmeichel produced more Wembley brilliance, but it was not enough for Denmark – the true team to celebrate at Euro 2020.