Tokyo Olympics: The highs and lows of the Games that almost never were

It has been a Games like no other, but there have been plenty of highlights from Tokyo 2020.

It was by no means certain the rescheduled Tokyo 2020 Olympics would even go ahead, such was the uncertainty caused by the coronavirus pandemic.

But go ahead they did and now here we stand on the eve of the closing ceremony in the Japanese capital.

They have certainly been a Games like no other and we all hope future Olympics will not be held under such unusual circumstances, and judging the success of Tokyo 2020 is no easy feat given the measures to do so are too arbitrary.

Having said that, here are the highs of the Games and some of the lows, too.

WARHOLM AND MCLAUGHLIN HAMMER THE HURDLES

Karsten Warholm revelled in bringing the "wow" factor to the men's 400m hurdles, and rightly so. The Norwegian became the first man to break the 46-second barrier – running an astonishing 45.94 seconds to smash his own world record, five weeks after breaking a benchmark held by Kevin Young for 29 years. A day later, Sydney McLaughlin battered her own world record in the women's race, clocking in at 51.46s. 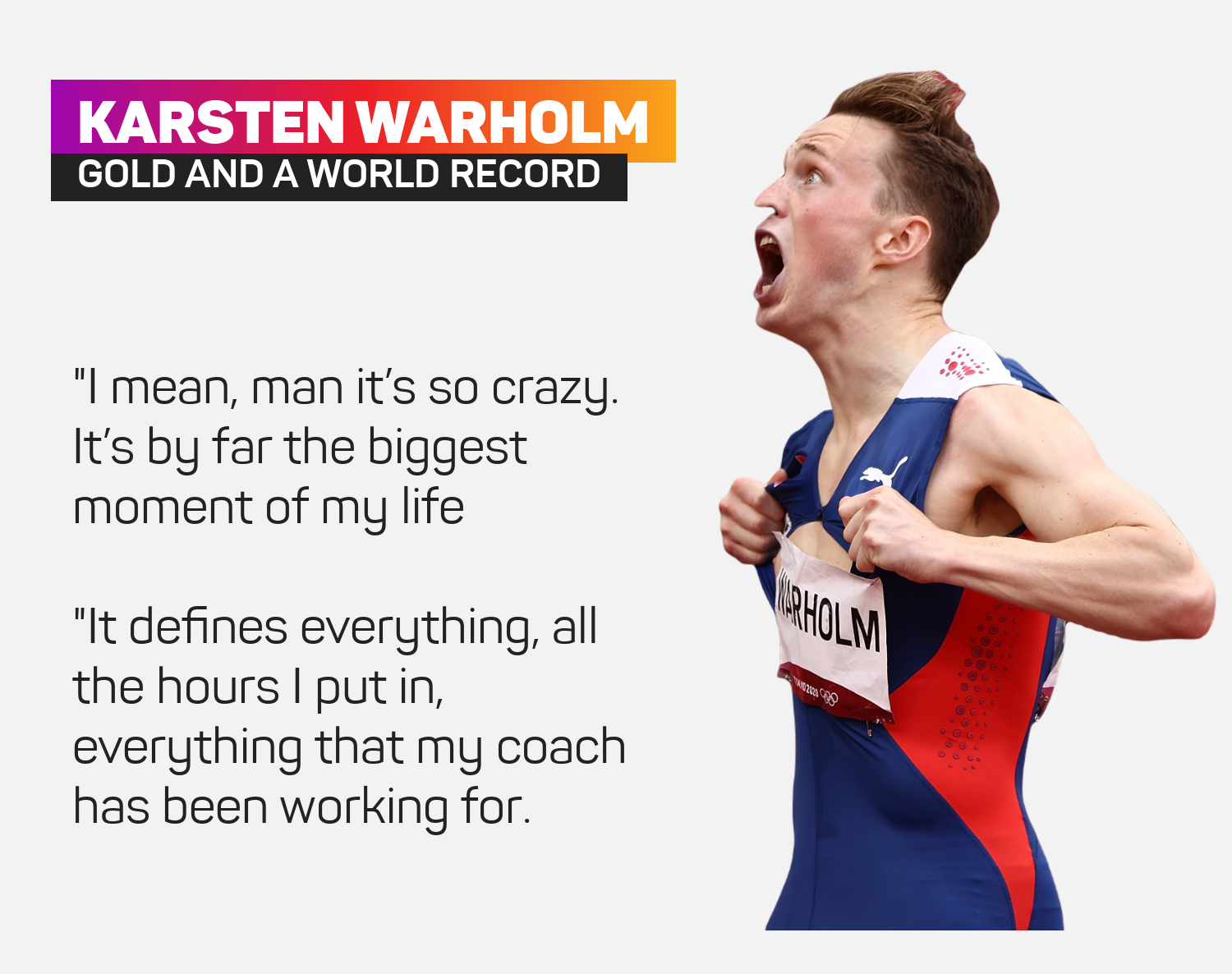 Five years ago in Rio, Annemiek van Vleuten was on course for victory in the women's cycling road race until a high-speed crash left her with minor fractures to her spine. To make matters worse, the Dutchwoman made headlines for celebrating what she thought was victory in the same event here in Tokyo – only to realise she had finished second behind runaway winner Anna Kiesenhofer. But finally, her golden moment arrived in the women's time trial – at the age of 38 years and 293 days, she became the third-oldest woman to win Olympic gold for the Netherlands.

Michael Phelps is an Olympics legend and no one can lay claim to more than the 23 golds or 28 overall medals he accrued over between 2004 and 2016. But a stellar cast this year proved swimming is in a very strong position. Emma McKeon took home seven medals (including four golds) – the joint-most of any woman at a single Games – while Ariarne Titmus' 200m and 400m free double was memorable, particularly her win over the great Katie Ledecky in the latter race. Caeleb Dressel took five golds to show his potential as Phelps' heir apparent, while Adam Peaty stunned again for Great Britain. It was some week in the pool.

THOMPSON-HERAH DOES THE DOUBLE-DOUBLE

Elaine Thompson-Herah announced herself to the world stage with a 100 and 200m sprint double at Rio 2016 but injuries in the intervening years stemmed her momentum a little. However, she peaked at the perfect time in Tokyo and backed up her double from Brazil – becoming the first woman to repeat on the 100 and 200m. Indeed, only Usain Bolt had ever previously done so. 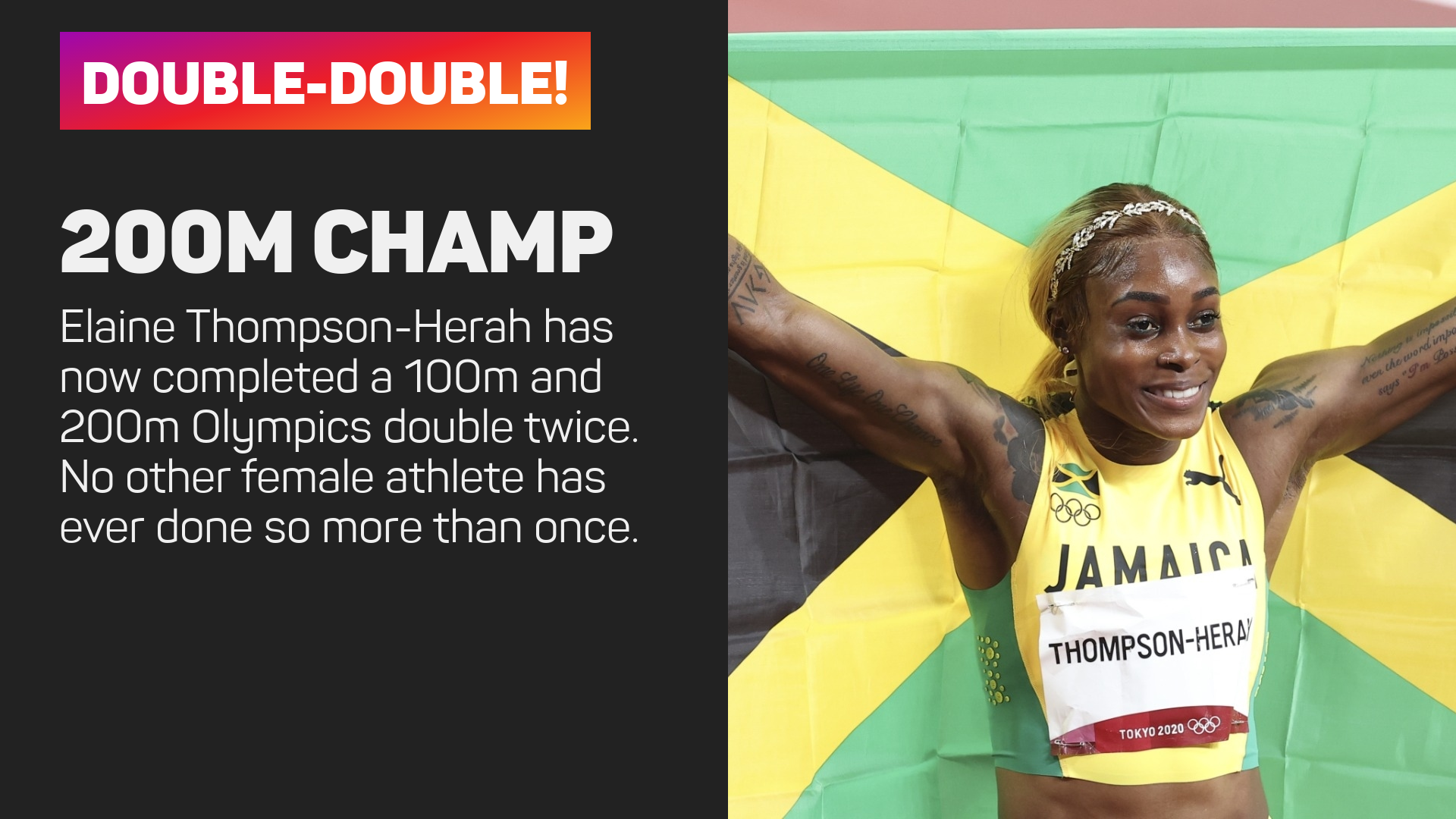 There was a shock in the men's 100m final where the unheralded Marcell Jacobs started the post-Bolt era with gold. That followed on from countryman Gianmarco Tamberi having minutes earlier shared high jump glory with Mutaz Essa Barshim. There were hugs aplenty as Italy, surely celebrating their greatest night at an Olympics, won two athletics golds at the same Games since Athens in 2004.

One of the most fascinating aspects of any Olympics is the new sports and categories that get added to the programme. At Tokyo 2020, skateboarding, surfing and climbing have all attracted new and younger audiences to the Games – while the addition of mixed triathlon and the mixed 4x400m track relay have been successes.

On the one hand, the fact we saw so little of Simone Biles and some of the reprehensible bilge aimed her way over the decision to pull out of the women's team event after just one rotation and then miss four individual events can be seen as a negative. But, on the other hand, the fact that she came back to take bronze on the balance beam and use her platform to promote the importance of protecting mental health has to be seen as a high. It takes bravery and courage in her position to speak on such matters. Kudos to you, Simone.

Let's start with the obvious here and something that has been spoken about pretty relentlessly. The absence of fans has had a huge cost on the atmosphere at these Games. Magical moments and career peaks played out in front of huge, empty stadia has undoubtedly been a huge negative. Many will take the fact we got here and managed to hold a Games at all as a positive. And it is. But at times, the whole thing felt a bit… meh.

With so many of the top male players opting to skip Tokyo, there was a big focus on Novak Djokovic and the next checkmark on his quest for a rare Golden Slam (only Steffi Graf has ever done it). The Serbian fell short, dropping out at the semi-final stage then getting a little stroppy. Big things were also expected of Naomi Osaka – a home hope and the 'face of the Games'. She made it as far as round three before going down to Marketa Vondrousova.

One of the ugliest stories to emerge from the Games was the story of Belarusian runner Krystsina Tsimanouskaya, who refused to board a flight after allegedly being taken to the airport against her will following her public criticism of her team's organisation on social media. Tsimanouskaya competed in only one event and claimed she was entered into a 4x400m relay despite never racing in the discipline, suggesting that was a result of members of the team being considered ineligible due to not completing enough doping tests. The Belarusian Sport Solidarity Foundation indicated Tsimanouskaya feared for her life upon returning to Minsk. The country is under the authoritarian leadership of president Alexander Lukashenko, whose son Viktor heads the national Olympic committee (NOC). Both men were banned last December from attending Tokyo 2020. The whole thing has been really rather unsavoury.

Inter maintained their unbeaten run at the expense of Fiorentina to maintain their lead at the top of Serie A.

Takumi Minamino scored twice as Liverpool swept through to the fourth round of the EFL Cup with a resounding win at Norwich.

Manchester City 6-1 Wycombe Wanderers: EFL Cup holders come from behind to storm through

Kevin De Bruyne, Riyad Mahrez, Phil Foden and Ferran Torres were on target as Manchester City came from behind to thump Wycombe Wanderers.

Having not played for Manchester United since January 2020, Phil Jones will be included in Ole Gunnar Solskjaer's squad on Wednesday.

Getafe 1-2 Atletico Madrid: Suarez at the double in another late turnaround

Luis Suarez, backed by Diego Simeone in the build-up to this game, came up with two precious Atletico Madrid goals at Getafe.

Robert Lewandowski is on an incredible goalscoring run for Bayern Munich and is hopeful that his best is yet to come.

Ancelotti sympathises with Koeman ahead of Mallorca clash

Real Madrid remain unbeaten in their first five games in LaLiga, winning four of them, to sit top of the league.