England beat Ukraine 4-0 to set up a semi-final with Denmark, and Gareth Southgate is eager to go all the way and lift the trophy.

Gareth Southgate is daring to dream of lifting the European Championship trophy at Wembley after England thrashed Ukraine 4-0 to reach their first semi-final in 25 years.

A couple of goals from Harry Kane and one apiece for Harry Maguire and substitute Jordan Henderson earned the Three Lions a routine win at Stadio Olimpico on Saturday.

It is just the second time England have scored four goals in a knockout match of a major tournament, the other instance being the 1966 World Cup final against West Germany.

That was the last occasion England reached the final of a major competition, while only three times since then have they made it as far as the semi-finals.

After losing on penalties to Germany at Italia '90 and Euro 1996, as well as to Croatia in extra time at the last World Cup, Southgate is hoping for a different outcome this time around.

"It's fabulous for our country - a semi-final at Wembley," Southgate, who missed the decisive penalty in the 1996 shoot-out defeat to Germany, told BBC Sport.

"I know what will be happening at home. It's lovely to see everyone on a Saturday night, beer in hand.

"They should enjoy it. It's been a long year for everyone. I'm chuffed the two performances have brought so much happiness to people.

"I suppose it's still sinking in that it's another semi-final. Everyone can really look forward to that – it's brilliant. We want to go two steps further than last time." 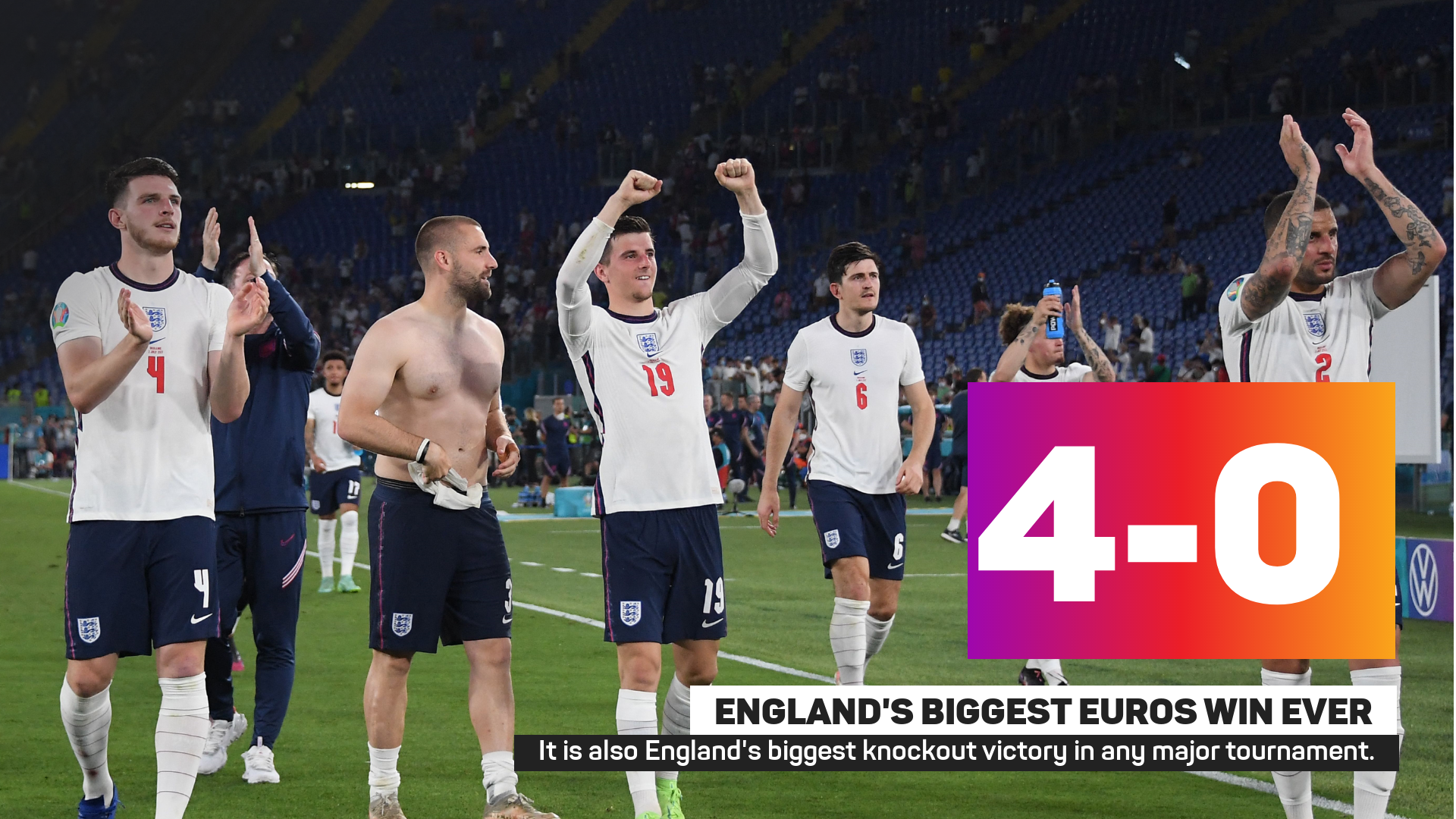 Denmark stand between England and the final after overcoming the Czech Republic 2-1 in Saturday's other quarter-final in Baku.

Southgate will be just the second manager to take charge of England in the semi-final of both the World Cup and the European Championship, after Alf Ramsey in 1966 and 1968.

"It is an absolute honour to be in that company," Southgate said. "It's lovely to be able to get the results that are putting our country on the football map again."

Southgate reverted to a back four against Ukraine and brought in Mason Mount and Jadon Sancho, the latter making his first start of the tournament.

The England boss now has some big selection calls to make for the semi-final with Denmark, but he is more concerned about which three players miss out on the squad entirely.

"I'm spending more energy worrying about the three I have to leave out because they're all good players," he said. "None of them deserve to be left out.

"They're all giving everything in training. None of it is because I don't think they're up to the level but we have to make the decisions.

"We have to make the right call for the right game with the right system. All of the players have been brilliant. Tonight all the way through the group they've been fantastic."

Ukraine were competing in just their second major tournament quarter-final, but the demands of their extra-time win over Sweden on Tuesday seemingly took their toll.

The Blue and Yellow enjoyed a spell on top at the end of the first half, though they ultimately only managed a couple of attempts on target in what was a one-sided contest.

Three of England's goals came from headers and Andriy Shevchenko, though pleased with his side's run to the last eight, acknowledged that aspect of his side's game let them down.

"I think small details played a key role in the game," he said at his post-match news conference. "We didn't cope well with the high balls. England have a big advantage in that area.

"But in general we played our football; we didn't turn our back on our principles. We tried to put up a good fight against this opposition, but this mountain turned out to be too big for us to climb.

"It's probably a bit too early for us to be climbing mountains like that. The guys did everything they could, and I want to thank them for that today."