No need to try to beat it! – Soucek hails Schick's 'goal of the tournament' against Scotland

Tomas Soucek hailed Patrik Schick's long-range strike against Scotland as "the goal of the tournament" after the forward's double helped the Czech Republic beat Scotland 2-0 in their Euro 2020 opener.

Schick stole the show in Monday's Group D clash at Hampden Park with a towering first-half header and an incredible goal from just inside the opposition half after 52 minutes.

The second was measured at 49.7 yards, making it the longest-range goal scored at the European Championship since such data was first recorded in 1980.

Euro 2020 may still be in its early stages, but Soucek does not believe team-mate Schick's sensational strike will be bettered throughout the rest of the tournament.

"It's clear we already have the goal of the tournament. No need to try to beat it," Soucek said. 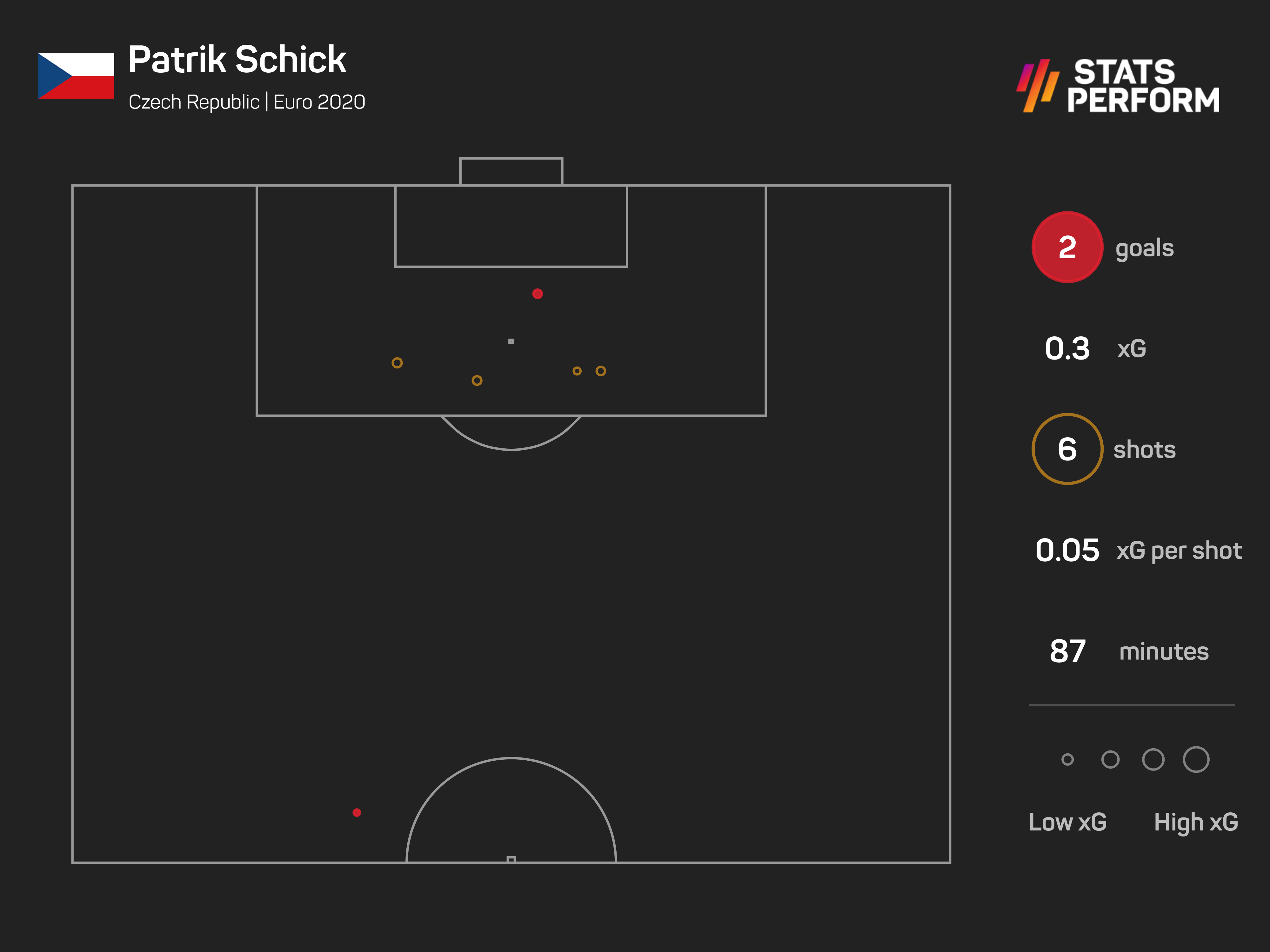 Schick overtakes Torsten Frings (38.6 yards) for the longest recorded strike in the competition with what was his 13th goal in 27 appearances for the Czech Republic.

The Bayer Leverkusen man lobbed the ball over David Marshall after his side turned over possession inside their own half, leaving the backpedalling Scotland keeper red faced.

And speaking after the game, Schick confirmed he had spotted Marshall off his line earlier in the contest and decided to have a go from range.

"I knew he liked to stay very high, so when the ball came, I quickly checked where he was standing, and it was a nice goal," he told BBC Sport.

"I saw the keeper off his line. I checked already in the first half and thought maybe this situation will come."

Schick has scored eight goals in his last nine starts for the Czech Republic, with Monday's long-ranger at Hampden Park undoubtedly the pick of the pitch.

"We know he's a genius," Czech coach Jaroslav Silhavy told reporters. "He knows how to finish and that's why he's there - it was something out of this world.

"We really haven't seen a goal like that from the middle of the field for a long time."

Scotland were backed by around 12,000 spectators on home soil in what was their first major tournament game in 23 years.

The hosts had 19 shots, four of those on target, but a lack of composure and some good goalkeeping from Tomas Vaclik kept them out.

Steve Clarke does not believe that the two-goal margin of victory for the Czech Republic paints a true reflection and is eager to bounce back for Friday's clash with bitter rivals England.

"It was quite an even game. There wasn't much in it," the Scotland boss told BBC Sport. "Obviously they were a little bit more clinical with their chances.

"Losing the goal with a second-phase set-piece was disappointing and we went in at half-time on the backfoot, then the boy's hit a wonderful strike from just inside our half.

"It was a shot that got blocked that fell perfect for them. So those moments went against us. When we had our chances to get back, we didn't take them.

"At times we played some good stuff. I'll have a good think about it. We'll go back to base camp, lick our wounds for 24 hours, then get ready for the game on Friday."

6 – Andy Robertson created six chances against Czech Republic; the most by any player at Euro 2020 so far, while only Gary McAllister vs Germany in 1992 (10) has set up more in a single Euros game for Scotland (since 1980). Supplier. #Euro2020 #SCO #SCOCZE pic.twitter.com/A47HzPKVAx

Clarke is hopeful of having Kieran Tierney back from injury to face England at Wembley, with the defender proving a big loss for Scotland in their tournament opener.

Fellow defender Andy Robertson was Scotland's star performer against the Czech Republic, creating a game-high six chances, none of which his team-mates could convert.

"At the highest level, you have to take your chances," he said. "The Czech Republic did that, we didn't, and that's why we’re on the wrong end of a result.

"For the first one, we shouldn't concede. It's a good header but we've got to be a wee bit stronger and braver.

"We started the second half well and hit the bar. The boy's in his own half and it's a one in a million shot. It knocked the stuffing out of us. Going forward, we need to be more clinical."

Scotland have now lost their opening match in five of their last six appearances at a major tournament, failing to score on five occasions in that run.

Schick's stunner against Scotland voted Euro 2020 Goal of the Tournament

Czech Republic forward Patrik Schick's goal from just short of 50 yards against Scotland has been crowned the best of Euro 2020.

Portugal great Cristiano Ronaldo is the leading scorer, but there have been many unpredictable elements to the opening stages of Euro 2020.

The British and Irish Lions face Japan before travelling to South Africa, but Hamish Watson will not be able to play as initially planned.

Scotland's first major tournament appearance in 23 years was brought to an end by Croatia at Hampden Park.

Group D came to a conclusion on Tuesday as England, Croatia and the Czech Republic all progressed – so Scotland miss out.

Croatia 3-1 Scotland: Scots dumped out of Euro 2020 at group stages

Scotland looked capable of producing a shock when they drew level through Callum McGregor but were ultimately beaten by the better side.

Mason Mount and Ben Chilwell have been forced to self-isolate and are major doubts for England's Euro 2020 game with the Czech Republic.

Nothing but a victory will do for winless duo Croatia and Scotland in their final Euro 2020 group game at Hampden Park.

Gilmour out of Scotland-Croatia after testing positive for COVID-19

Scotland must make do without the influential Billy Gilmour as they prepare for a huge Group D clash against Croatia at Euro 2020.

Scotland earned an impressive point against England at Wembley, with Billy Gilmour shining in his first international start.

After the two teams could not be separated after 120 minutes, Brazil eventually eliminated Mexico on penalties as they go for gold.