Kylian Mbappe was heavily criticised by ex-France winger Jerome Rothen, but Presnel Kimpembe has leapt to his team-mate's defence.

Presnel Kimpembe has defended team-mate Kylian Mbappe after the forward was criticised by former player Jerome Rothen for putting himself first over the team.

Mbappe failed to score or assist a goal in France's three Euro 2020 group matches, but Les Blues still advanced with draws against Hungary and Portugal after beating Germany.

The Paris Saint-Germain star's eight attempts are the most of any France player in the tournament, but he found the target from just three of those.

Only three players – Gerard Moreno (nine), Burak Yilmaz and Martin Braithwaite (both 10) – had more attempts in the group phase without scoring.

Mbappe is four games without a goal overall, meanwhile, and ex-PSG winger Rothen has suggested the 22-year-old's ego is hindering his performances.

"There's no problem with Mbappe being the leader on the field, but when it goes beyond the field then it annoys me," Rothen, who earned 13 senior caps for France, told RMC Sport.

"I don't think Didier Deschamps can handle it anymore and it is becoming troublesome. It's amazing Kylian is allowed to do so many things. His ego is inordinate and is a problem." 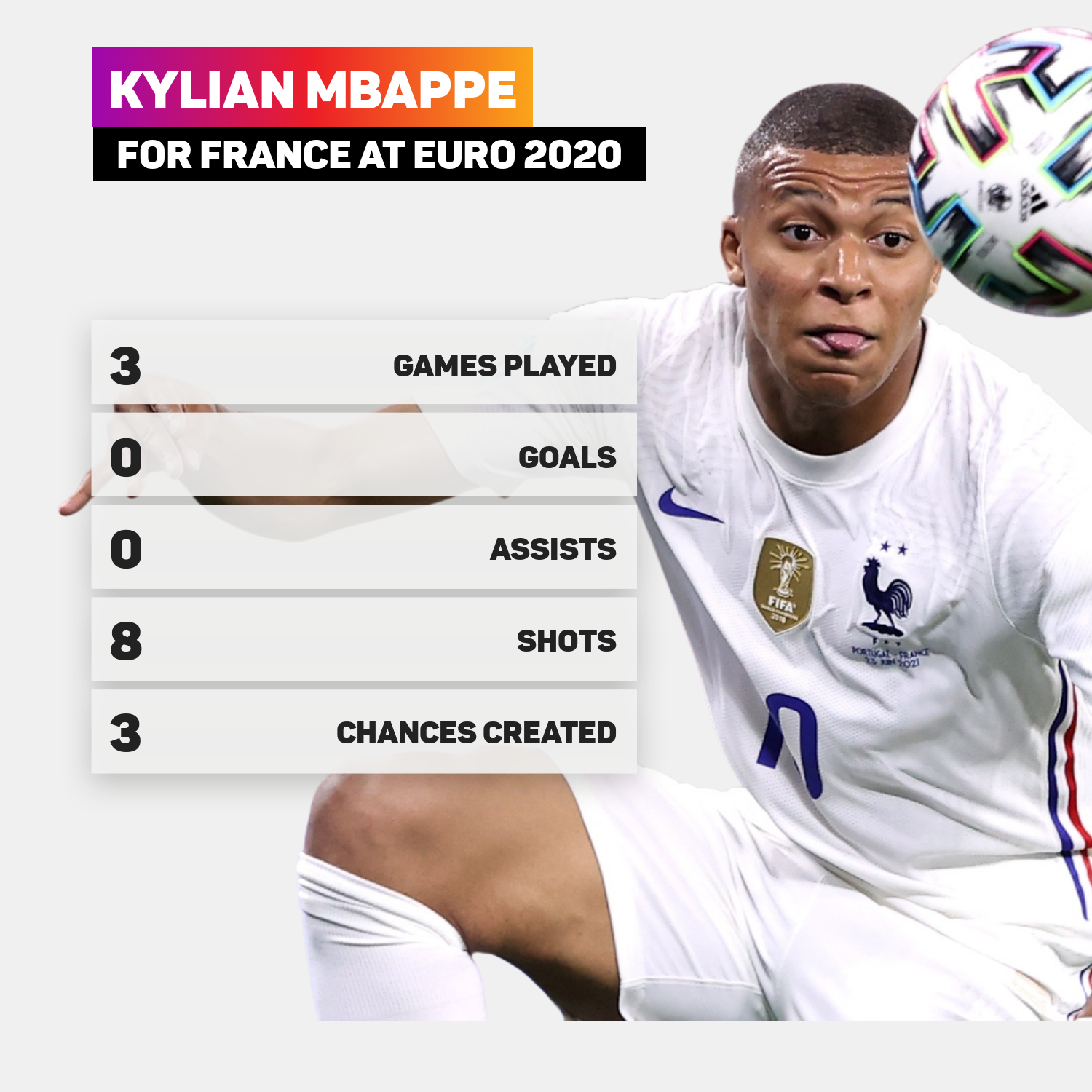 Mbappe created three chances in the games against Germany, Hungary and Portugal, which is one fewer than Paul Pogba and three fewer than Antoine Griezmann.

But Kimpembe has no concerns over Mbappe's form and believes it is just a matter of time before he starts scoring goals again.

"There is still a long way to go in the competition," he said at a news conference on Saturday ahead of France's last-16 tie with Switzerland.

"Scoring will not be a problem for him. He is also there to provide for the rest of the team. He is creating a lot of chances.

"He is not scoring but is playing a part in the team's offensive actions and is happy to help others – that is the most important thing for the team. Above all, the results are most important."

France's entertaining 2-2 draw with Portugal on Wednesday saw them finish top of Group F and set up a meeting with Switzerland in Bucharest on Monday.

Should Les Blues pass their first knockout-round test, they are on course to face either Spain or Croatia – the side they beat in the 2018 World Cup final – in the quarter-finals.

And while France managed just one win in their three group fixtures, Kimpembe was eager to put things into perspective after topping an extremely tough group.

"To come out on top in the group of death, I'll take that," Kimpembe said. "What would you rather: finish first with a few problems, or second and third with good performances?

"You have to put things into perspective and look at the bright side. The objective was to finish first, which we've achieved. We are very happy about that."

France have now gone two years since their last competitive defeat, which came against Turkey in a European Championship qualifier in June 2019.

Pochettino signs new contract to remain with PSG until 2023

Paris Saint-Germain have been busy during the close-season, with the club's latest move seeing Mauricio Pochettino sign a new deal.

Rumour Has It: Pressure on Manchester United as Pogba enters PSG talks

Manchester United are under pressure to sell or renew Paul Pogba before he becomes a free agent in 12 months' time.

After numerous high-profile signings this transfer window, Mauricio Pochettino is convinced PSG now have the quality to help them dominate.