Luis Enrique said it was a good thing Gerard Moreno missed a string of chances in Spain's victory against Switzerland rather than Alvaro Morata following the recent criticism aimed at the Juventus striker.

Three-time European champions Spain booked their place in the semi-finals of Euro 2020 on Friday with a dramatic penalty shoot-out victory over 10-man Switzerland.

La Roja, who needed extra time to overcome Croatia in the last 16, were pegged back by a Xherdan Shaqiri strike in St Petersburg after Denis Zakaria's own goal had put them in front.

Even after Remo Freuler's dismissal with 77 minutes played, Luis Enrique's men could not find a way through due to a mixture of profligacy and a number of Yann Sommer saves – a tournament-high 10 in total.

Gerard replaced Morata and endured a tough time of it, the Villarreal striker missing a number of good opportunities to win the tie for Spain before penalties were required.

He managed six shots, half of those on target, while his expected goals (xG) return of 3.3 for the tournament so far is the highest of any player yet to score at Euro 2020.

Morata revealed last week he and his family had been subjected to abuse by Spain fans, and Luis Enrique is glad the striker was not the recipient of any more criticism on Friday.

"Luckily it was Gerard Moreno who failed to take the chances. If Morata misses them, you impale him," the Spain head coach said after the quarter-final win. 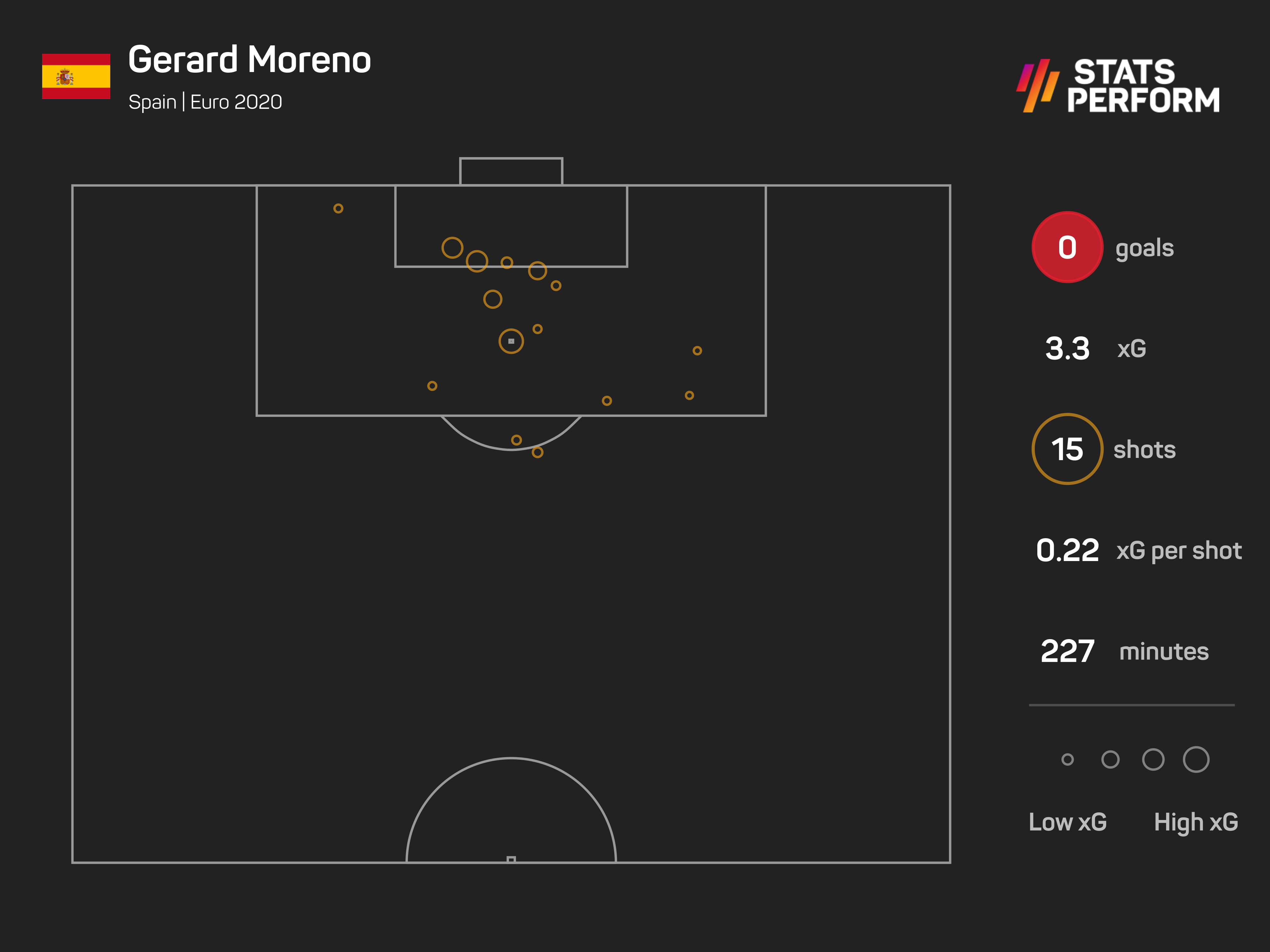 Spain are the sixth team to progress from two separate knockout games of a single European Championship tournament that went to extra time or beyond, all five previous sides going on to lift the trophy.

They were on the back foot when Sergio Busquets missed the first spot-kick, but Fabian Schar, Manuel Akanji and Ruben Vargas all failed to find the net for Switzerland.

Asked if he felt nervous watching the shoot-out, Luis Enrique said: "It was a tranquil moment for me because we'd already worked on everything. Nothing else could be done.

"Win or lose on penalties, the team would have done excellently for my judgement. For how they've handled this, how they've played, how they've represented Spain.

"We are so proud. It'd be ridiculous to think that we, or any of the semi-finalists, would settle for just getting that far now – all of us want to get to the final and win.

"I've said from the outset that we are one of the seven or eight teams which, no exaggeration, could win this trophy – now we're one of four."

Switzerland knocked out competition favourites France on penalties in the last round following an incredible 3-3 draw, but they ultimately could not do likewise against Spain.

It is the fourth time the Swiss have been eliminated from a major tournament at the last-eight stage, with each of those previous occasions coming in the World Cup.

"I have mixed feelings," said head coach Vladimir Petkovic after the game. "I have pride – we can all be so proud. We leave here with our heads held high.

"On the other hand, we were so close to the semi-final, and that doesn't happen often. I have more positive than negative feelings.

"Congratulations to Spain. They tried everything and in the end won on penalties. I am very proud of my team, and all the players.

"My players were the heroes of the night. We would have deserved to go to the semi-final."