Euro 2020 will conclude at Wembley on Sunday, with England hoping to win their first ever European Championship.

England will hope to end a 55-year major-tournament trophy drought on Sunday when they meet Italy in the Euro 2020 final, while Roberto Mancini is eyeing the crowning achievement of his transformational reign.

The Three Lions have not even qualified for a final since winning the 1966 World Cup and will be competing in their first European Championship decider. It will be Italy's third this century, though it is a competition they have not won in 53 years.

Although Italy's performances up to the final have generally attracted widespread acclaim, with the Azzurri stretching their unbeaten record to 33 matches, England will once again have the advantage as hosts.

England have won 15 of their previous 17 matches at Wembley, while seven of the previous 10 instances of a European nation competing in a major tournament final as hosts (World Cup/Euros) have ended in victory for the home side. 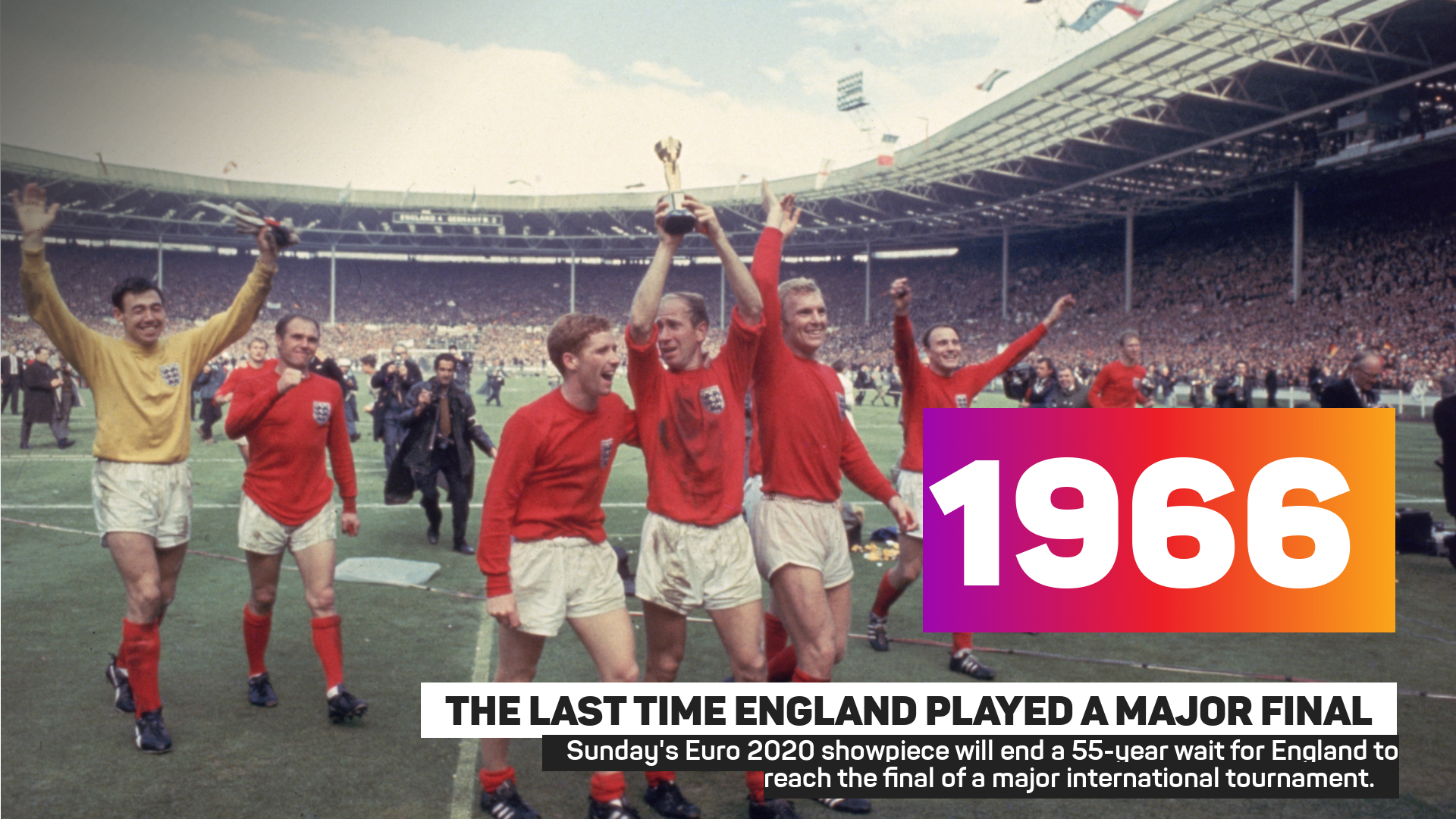 As much as anything, Gareth Southgate has cherished the chance to bring joy to fans so far at the tournament, but he is not kidding himself that adulation is a guarantee.

"I know we can make people's lives happier," he told the Telegraph. "It's a wonderful privilege to be able to make a difference, but if you get any of those bits wrong it can fall down and it's no use being able to speak about areas of society.

"If we don't get the tactical bit right, the selections right, if we don't manage the players the right way, the house falls down. I know now this is a lovely period in many ways, but we've got to get Sunday right."

Nevertheless, Italy have confounded their doubters every step of the way at Euro 2020, and Mancini, having taken over his national team in the wake of World Cup qualification failure three years ago, is a step away from completing one the great turnarounds in international football.

While Jorginho has arguably been the Italian midfielder to garner the most applause at Euro 2020, Verratti has been no less integral when on the pitch. Only Pierre-Emile Hojbjerg (15) has started more open-play sequences ending in a shot than him (nine), while Kevin De Bruyne (13) is the sole individual with more chances created (12 for Verratti). He is not just important to Italy's flow in possession, but he also has a vital role as a creator – if England find a way to keep him quiet, their own title hopes will surely improve considerably.

In a sense, Spain gave England something resembling a blueprint of how to nullify some of Italy's strengths. One aspect was Dani Olmo deployed as a false nine, with La Roja trying not to directly engage the Italian centre-backs while also creating a midfield overload. If any striker in world football is equipped to carry out a similar role, it's Kane. The Tottenham star remarkably got 12 open-play assists from 3.6 xA (expected assists) in the 2020-21 Premier League campaign, with as many as six coming from deeper positions. Granted, his over-performance of 8.4 suggests he benefited from some luck or good finishing, but it also proves how effective he can be. 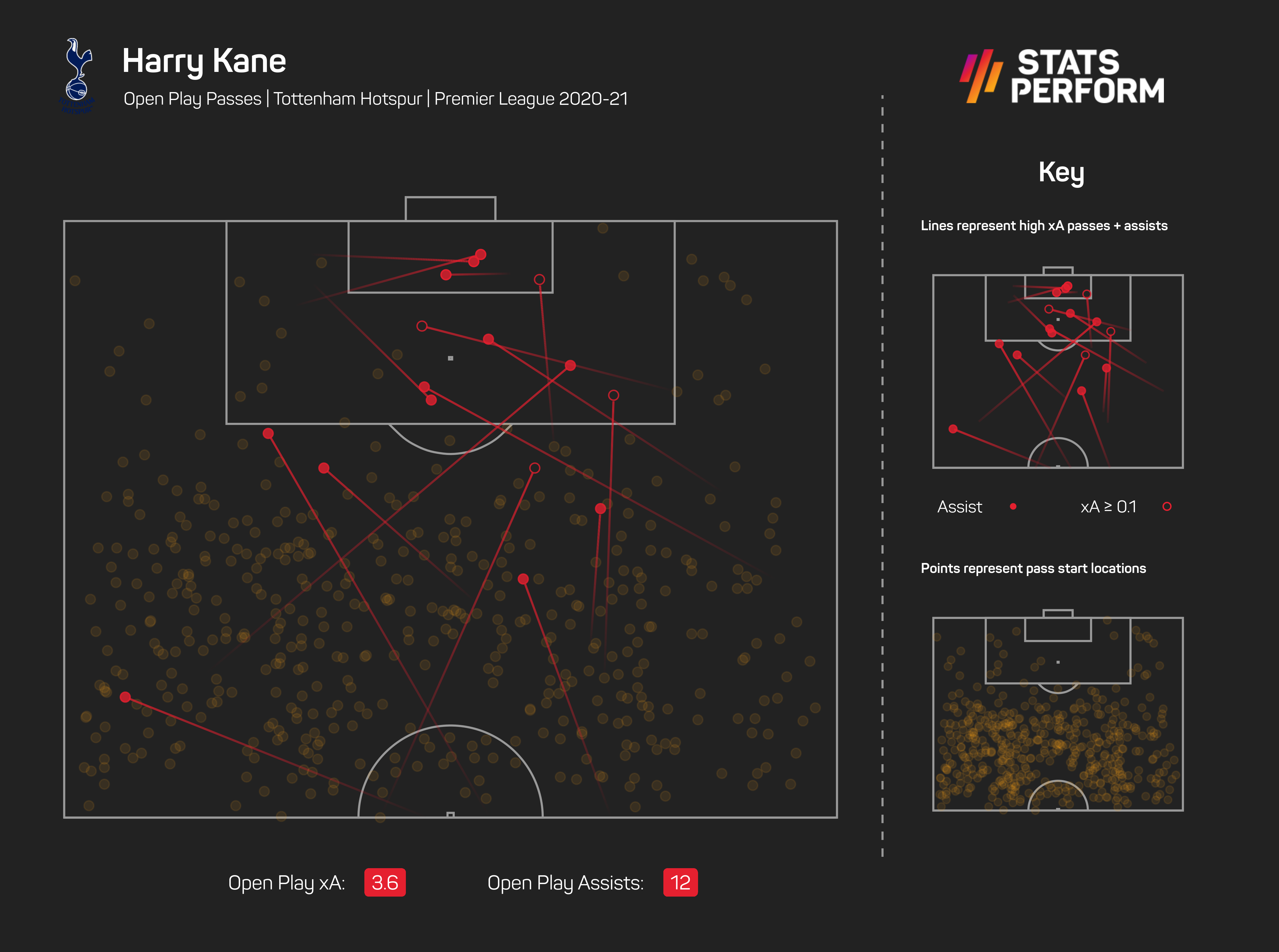 - Between them, England (2.2) and Italy (2.3) have faced fewer shots on target per game than any other sides at Euro 2020. England also have the lowest expected goals against tally in the competition so far (3.2).

- Italy have had 12 shots and scored three goals as a result of a high turnover (open play sequences beginning 40metres or less from opponents' goal line) at Euro 2020, more than any other side.

- England's 2-1 win over Denmark in the semi-final was their eighth win in a major tournament match under Southgate, moving him level with Alf Ramsey for joint most victories by an England manager across the two competitions.

- This is the third major tournament final to be held at Wembley Stadium. The previous two were both won in extra time, with England beating Germany in the 1966 World Cup, and Die Mannschaft then defeating the Czech Republic in Euro 1996.

- England are the 13th different nation to feature in a European Championship final (counting Czechoslovakia and the Czech Republic as one) – just three of the previous 12 lost their first ever final in the competition: Yugoslavia (1960), Belgium (1980) and Portugal (2004).