Italy v Austria: Record-chasing Azzurri have quarter-finals in their sights

Italy are in the hunt for two national records on Saturday, as they aim to overcome Austria in the Euro 2020 round of 16 at Wembley.

The Azzurri flew through the group stages, scoring seven goals – the most they have scored across their first three games of a major tournament since 1998 – in victories over Turkey, Switzerland and Wales.

Roberto Mancini's team have won 11 games in a row without conceding a goal. Their clean sheet streak has lasted 17 hours and 35 minutes since Donny van de Beek scored for the Netherlands in October 2020.

One more clean sheet will see them equal their record for consecutive games without conceding (12), set between 1972 and 1974, while also surpassing the previous total of minutes (1,143) without letting a goal in.

Their run of 30 games without a defeat also matches a record set under Vittorio Pozzo between 1935 and 1939.

With a quarter-final tie against Belgium or holders Portugal in Munich up for grabs, Italy must first defeat Austria, who have not beaten the Azzurri in their last 13 meetings, a run dating back to December 1960.

Italy have also won four of their meetings with Austria at major tournaments.. However, they have won only two of their 13 matches played in London.

"Austria are a physical side, they keep the tempo high, but we're prepared, we are Italy and we go out there to win," defender Giovanni Di Lorenzo said in a pre-match news conference.

"I don't feel anxiety in the group, just the concentration and eagerness to get out there and play. The knockout stages begin here, this is the meat of the competition and we can't wait."

Mancini has been happy to rotate his squad, with 25 of 26 players – including back-up goalkeeper Salvatore Sirigu – having appeared so far in the tournament.

Manuel Locatelli impressed in the opening two matches, but Marco Verratti turned in a star performance against Wales. The Paris Saint-Germain playmaker created a game-high five chances, led the way for passes completed (103 from 110 attempted), touches (136) and tackles (four), and Mancini has a decision to make in midfield.

Franco Foda's use of David Alaba has seemed strange at times in Euro 2020. Having been deployed in midfield for much of his international career, Alaba was utilised in a three-man defence in wins over North Macedonia and Ukraine, though played at the heart of the back three in a defeat to the Netherlands.

Regardless of his position, Alaba still created nine chances in the group stage, at least four more than any other Austria player. Four of these came in Austria’s 1-0 win against Ukraine last time out. 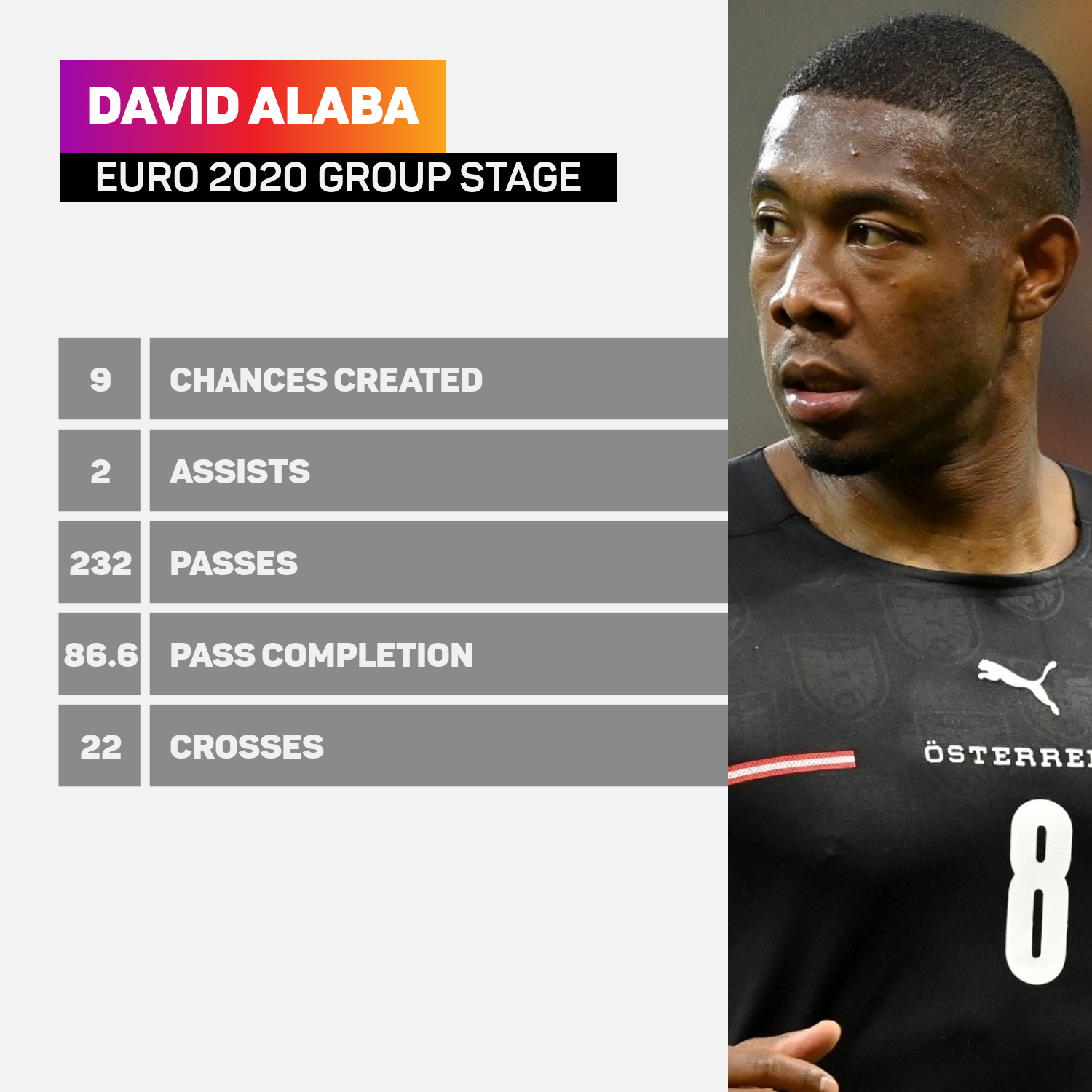 - Seven of Italy's 14 knockout stage games in the European Championship have been drawn (W4 L3). Of these seven draws, they have won two and lost three by a penalty shootout, won once on a coin toss and the other went to a replay which they eventually won.
- This is Austria's maiden appearance in the knockout stages of the European Championship, and their first in the knockout stage of any major tournament since the 1954 World Cup, when they reached the semi-final.
- Italy have won two of their 13 matches that were held in London (D5 L6), and are winless in five matches there (D3 L2) since beating England 1-0 in 1997 in a World Cup qualifier at Wembley, with Gianfranco Zola scoring the only goal.
- Austria have lost four of their six games in London in all competitions (W1 D1), with this their first visit to the English capital since a 7-0 friendly defeat in September 1973 (vs England).
- Italy had 60 shots across their three games in the group stages, with their average of 20 shots-per-game their highest on record in a single edition of the European Championship (since 1980).

Team USA should have a favourable draw in the quarter-finals after thrashing the Czech Republic, as France and Australia won Groups A and B.