France can progress to the last 16 of Euro 2020 with victory over Hungary, but Didier Deschamps isn't taking the hosts lightly.

Didier Deschamps anticipates Hungary presenting world champions France with a dangerous test as Les Bleus look to seal their place in the last 16 of Euro 2020.

France were not at their best in an entertaining 1-0 win over Germany, but the fact only the offside flag prevented their victory from being more emphatic in a game where they clearly had several other gears sent an ominous message to the other contenders for the title.

But they have work to do to win Group F, from which they will progress should they beat Hungary, with Portugal having shown their mettle with a late show against the same opposition in Budapest to prevail 3-0.

Yet Deschamps was impressed by what he saw from the minnows of the group prior to Raphael Guerreiro's 84th-minute opener, which preceded a Cristiano Ronaldo brace, and is expecting his side to receive a stern examination in front of a crowd of 65,000.

"Obviously the support of fans for a home side is very important, this helped them [Hungary] against Portugal because let's not forget up to 80th minute it was 0-0," he told a media conference.

"They actually were the first to hit the back of the net but unfortunately the goal was disallowed.

"They're a highly efficient team, well structured, they have an Italian coach and I think this has a lot to do with it. Hungary will be playing at home, therefore I'm expecting them to be just as dangerous as they were against Portugal."

Marco Rossi is the man tasked with guiding Hungary to what would be one of the biggest upsets in European Championship history, having accepted blame for the margin of defeat against Portugal.

"We came apart at the seams," said Rossi. "That was my fault. I made too many changes that didn't work.

"We were trailing and we needed to do something. I did that and clearly I got it wrong. Occasionally you can hold your hands up and saw you made a mistake."

France will have full-backs Lucas Hernandez and Benjamin Pavard available in Budapest. Hernandez had what Deschamps described as "a niggle" while Pavard suffered a head injury in the win over Germany.

Antoine Griezmann is in line to feature in a record 50th consecutive game for France and facing the Barcelona star, Kylian Mbappe and Karim Benzema, Hungary can ill-afford to have their structure come apart once more.

Lovrencsics will look to test Hernandez's fitness if he retains his place on the right flank after providing a threat from that side against Portugal.

He produced two good open play crosses against Portugal and was one of just three Hungary players to create a chance in that defeat.

Should the play become stretched, Lovrencsics may be the player to whom Hungary turn to take advantage.

While it is tough to take your eyes off Mbappe and Co. up front, Rabiot's display against Germany was worthy of greater attention.

He also did his fair share of work in defence. Rabiot made three interceptions, tied with Paul Pogba for the most among France players, while only the Manchester United star (12) won possession more times than the Juventus man (9).

In what may develop into a high-octane match in front of a vociferous crowd, Rabiot's composure and strengths as a box-to-box midfielder could be pivotal for France. 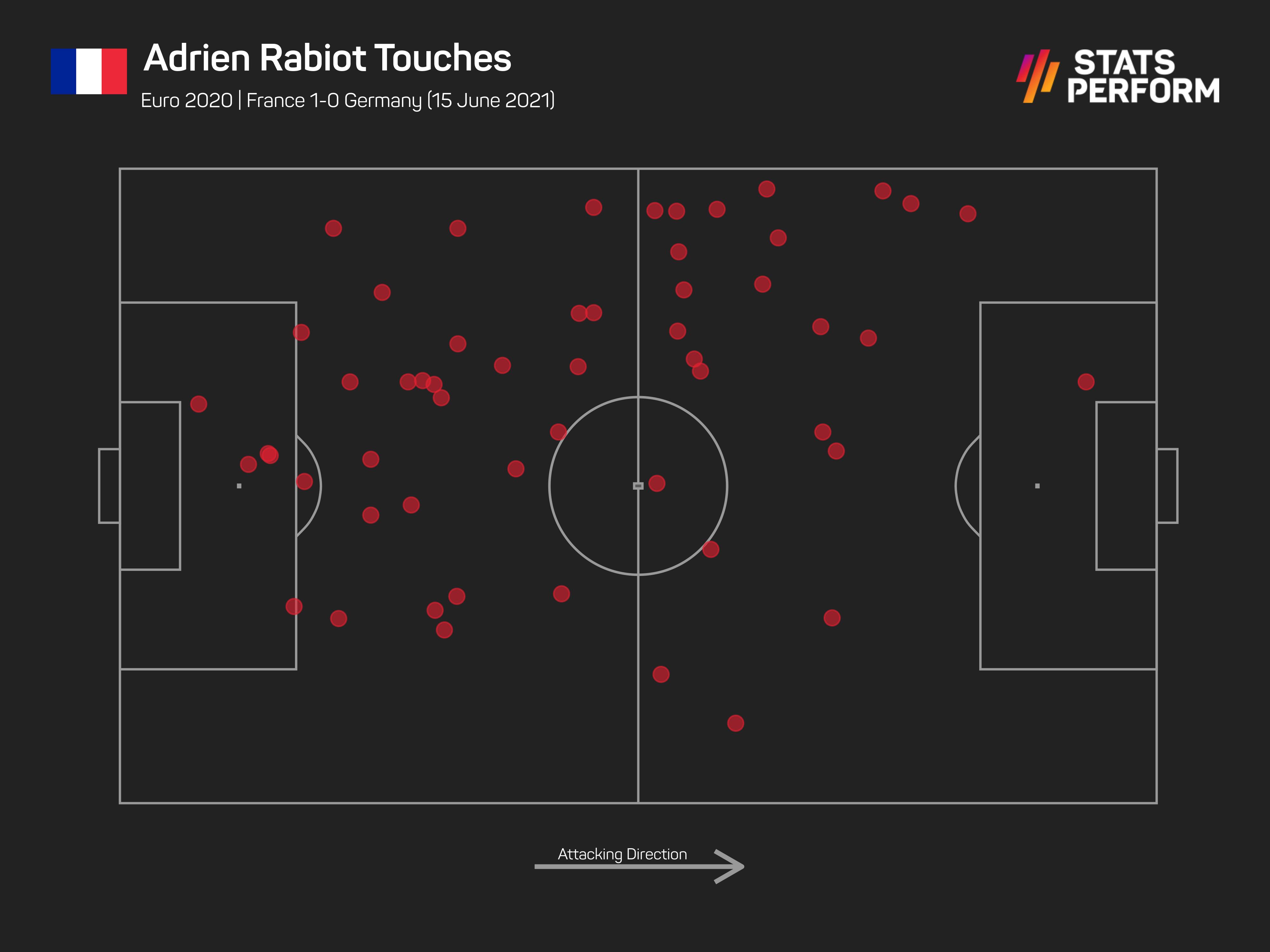 - Les Bleus have beaten Hungary only once in their eight games played on Hungarian soil (D1 L6), that was in March 1990 at Budapest's Nepstadion (3-1, including a brace from Eric Cantona).

- France have won their last five matches in all competitions, doing so without conceding a single goal. They haven't won six games in a row since June 2016, when the final two games in the run were their opening two matches of Euro 2016.

- Going into MD2, Hungary have conceded more goals at the last two European Championships combined than anyone else, letting in 11 goals in five matches, including seven in their last two games alone (0-4 vs Belgium at Euro 2016, 0-3 vs Portugal at Euro 2020).

- During 2021, only Italy (6) have kept more clean sheets among European nations than France (5), who have kept a clean sheet in their last five matches in all competitions. They last kept six in a row between March and September 2007 under Raymond Domenech.

- Benzema – who is 10th on the list of all-time top scorers for the French national team with 27 goals – has never scored a goal at the Euros in seven previous appearances. Since 1980, his 28 efforts at goal without scoring in the competition are the third-most of any player, behind Spain's Andres Iniesta (34) and the Netherlands' Clarence Seedorf (33).

France fell to a heavy defeat at the hands of Mexico and now do not have much time to react before they face South Africa.

The United States suffered disappointment at the 2019 World Cup when they lost to France, who are also their opening Olympic opponents.

Noah Lolesio slotted over a penalty two minutes from time to earn Australia a 33-30 win over France in Saturday's series-deciding clash.