The winners of the past two World Cups begin their Euro 2020 campaign on Tuesday, with France facing Germany in Munich.

France get their Euro 2020 campaign underway against Germany on Tuesday in a game described by Didier Deschamps as a meeting of Europe's best two teams.

Les Bleus, winners of the 2018 World Cup, are bidding to win the European Championship directly after being crowned world champions for the second time, having done the same double in 1998 and 2000.

Head coach Deschamps played at each of those tournaments and is bidding to become the first person in history to win the World Cup and the Euros as both player and coach.

France were handed a devilish group, though, alongside Portugal - who beat them in the Euro 2016 final on home soil - and 2014 world champions Germany, who lost to the hosts at the semi-final stage five years ago.

France are unbeaten in their past five games in Germany, but Joachim Low's side have never lost their opening match at the Euros, last failing to win their first game against the Netherlands in 2004.

1 – For the first time since the World Cup 2014, when @DFB_Team_EN won the title, a major tournament was opened by an own goal. Repeat? #TURITA #EURO2020 pic.twitter.com/A9fBj34Rzo

Still, Germany's preparations have not been easy. They lost 6-0 to Spain last November – a result that almost cost Low the chance to lead the team into one final major tournament – and they suffered a shock home defeat to North Macedonia in World Cup qualifying in March.

They are now in 12th position in the FIFA rankings, but Deschamps thinks there are no stronger opponents France could face at these championships.

"The quality of our opponents tomorrow makes this a fantastic encounter," he said on Monday. "It's going to be a great match for us. We're the best two teams in Europe, so it's about being focused in defence and clinical in attack.

"There is individual quality in every position, but the players can play in very different positions, be flexible.

"There are other players like [Timo] Werner, or [Leroy] Sane, who have a different kind of playing style. We'll see who will start in attack. They are important for Germany, obviously, and we have to stop them from having a lot of impact in the game." 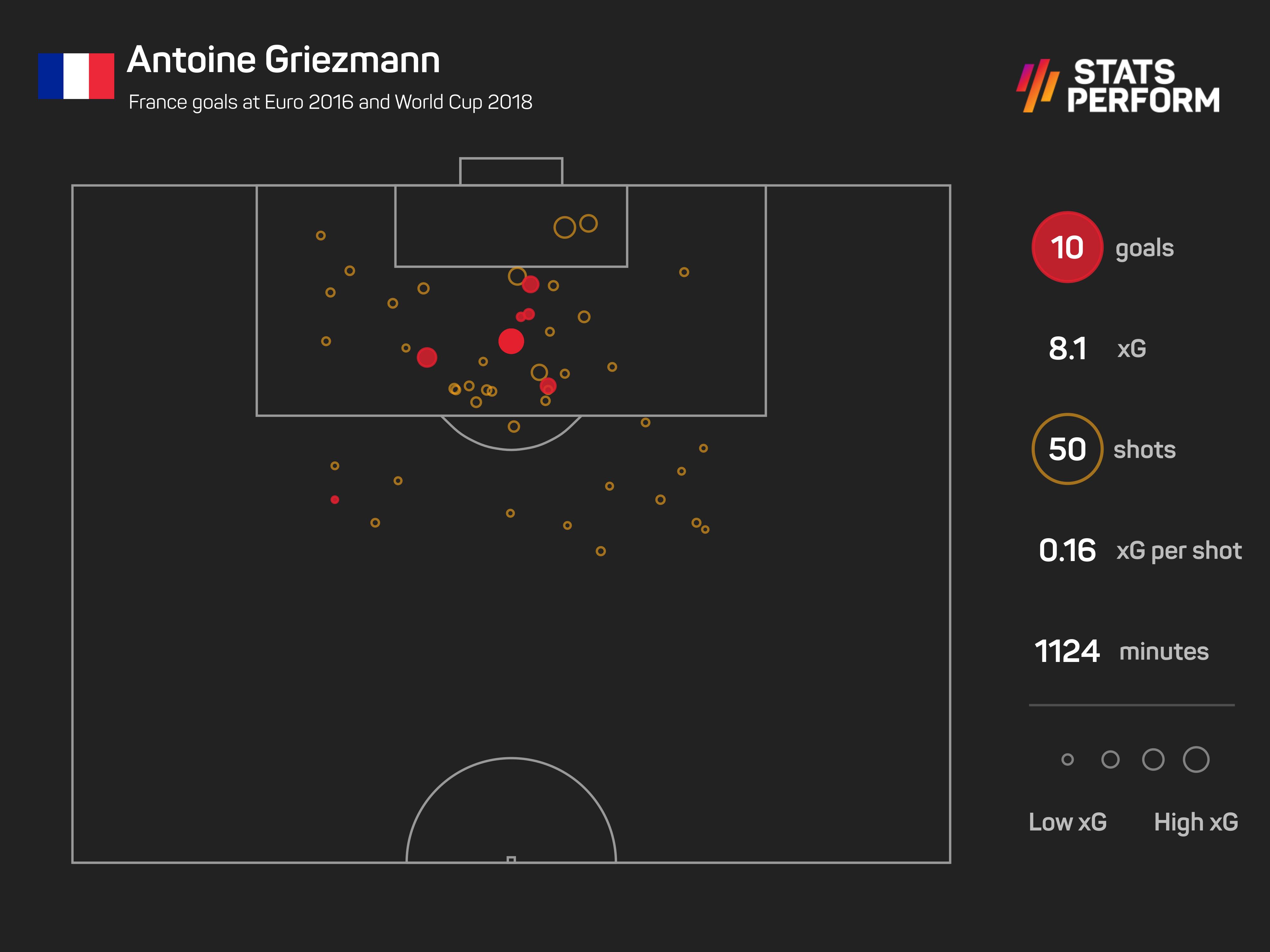 Much of France's build-up has been dominated by a rumoured bust-up between Kylian Mbappe and Olivier Giroud, who needs only five goals to match Thierry Henry's all-time scoring record for Les Bleus.

It is Griezmann, though, who will likely worry Germany the most. He scored both goals in that semi-final five years ago, taking his tally to four against them, and he has been directly involved in 14 goals over the past two major tournaments, more than any other European player.

Back at a major tournament again after being told his international career was over in late 2019, Muller will now bid to end a peculiar barren run at the European Championship.

The Bayern Munich star has never scored at this event in 11 appearances, which is particularly odd for a man with 10 goals in 16 World Cup matches.

- This will be the sixth meeting between France and Germany at a major tournament, but their first in the group stages. So far, their head-to-head record is perfectly balanced with two wins each and a draw.
- Since – and including – World Cup 2014, France have won 14 of their 19 games at major tournaments (World Cup and European Championship), more than any other European team over that period prior to Euro 2020, ahead of Belgium (13 wins in 17 games) and Germany (10 wins in 16 games).
- Germany are taking part in their 13th European Championship, more than any other team. They have won the trophy three times, the most alongside Spain. Their next game will also be their 50th in the tournament, becoming the first team to reach that milestone.
- Only two European goalkeepers have made more appearances at major international tournaments than Germany's Manuel Neuer (27): Iker Casillas and Gianluigi Buffon (31 each).
- This will be Low’s 18th game as coach in the Euros, a record. Low has led Germany to the semi-finals in five of his six previous tournaments, the only exception coming at World Cup 2018 (group-stage elimination).

It is now 51 straight victories in women's OIympic basketball for Team USA, but hosts Japan made the favourites work for it.

Team USA belatedly registered their first win of the Olympic Games, but France and Australia are setting the pace in Tokyo.

Tokyo Olympics Recap: Popovich insists France loss should not come as a surprise

USA suffered a rare defeat in the men's basketball at the Olympic Games against France, while Anastasija Zolotic created history.