UEFA honoured Gianluigi Donnarumma as the player of Euro 2020 after his shoot-out heroics but Marco Verratti was key to Italy's success.

Marco Verratti ended his Euro 2020 campaign as he started it – looking on as a frustrated spectator, willing his team-mates to victory.

Those do not exactly sound like the activities of a player of the tournament candidate, but what Verratti did in between those moments of stasis did more to define Italy's march to glory than anything else.

Gianluigi Donnarumma denied Jadon Sancho and Bukayo Saka from 12 yards after Marcus Rashford hit the post to hand Italy a 3-2 victory on penalties after a 1-1 draw with England at Wembley in Sunday's final.

Those heroics led to UEFA giving the Azzurri goalkeeper their Player of the Tournament award, but there is undoubtedly a case for recognising Paris Saint-Germain playmaker Verratti as the key influence upon Roberto Mancini's free-flowing side.

Joining the party in Rome

Italy had already booked their place in the knockout stages before Verratti managed to kick a ball, with Turkey and Switzerland swept aside 3-0 at a joyous Stadio Olimpico.

Manuel Locatelli, the Sassuolo midfielder, was selected in Verratti's absence and performed superbly, scoring a brilliant brace in the Switzerland match.

In that context, Verratti's outing in the dead rubber against Wales could very easily have been a matter of getting minutes in the legs and not a whole lot else, but the 28-year-old made an inarguable case. 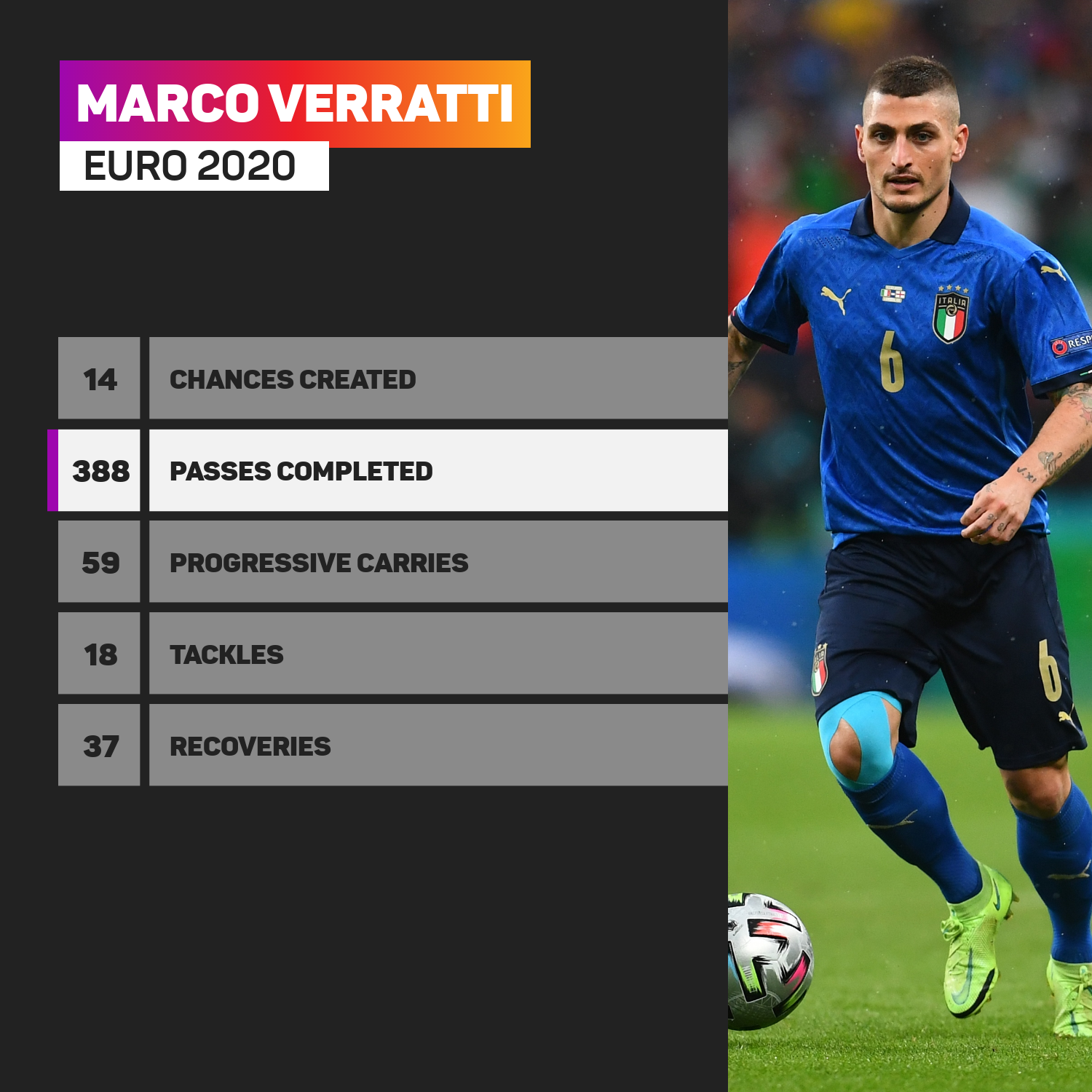 Returning from his 10th illness or injury setback of 2020-21, including two positive tests for coronavirus, Verratti was instantly into the groove. He won a free-kick just before half-time that he clipped in delightfully for Matteo Pessina to score the only goal of the game.

From sidelined to undroppable

Mancini proceeded with caution when it came to his star creator, as Italy landed at Wembley for the first time to face Austria in the knockout stages.

He played 67 minutes of the 2-1 extra-time win. Even in that spell, he managed to create more chances than any other Italy player (four) and completed 67 of his 70 passes, with 46 of those coming in the opposition half (95.7 per cent completed).

In the thrillingly intense quarter-final versus Belgium, Verratti's workload was stretched a little more to 74 minutes. 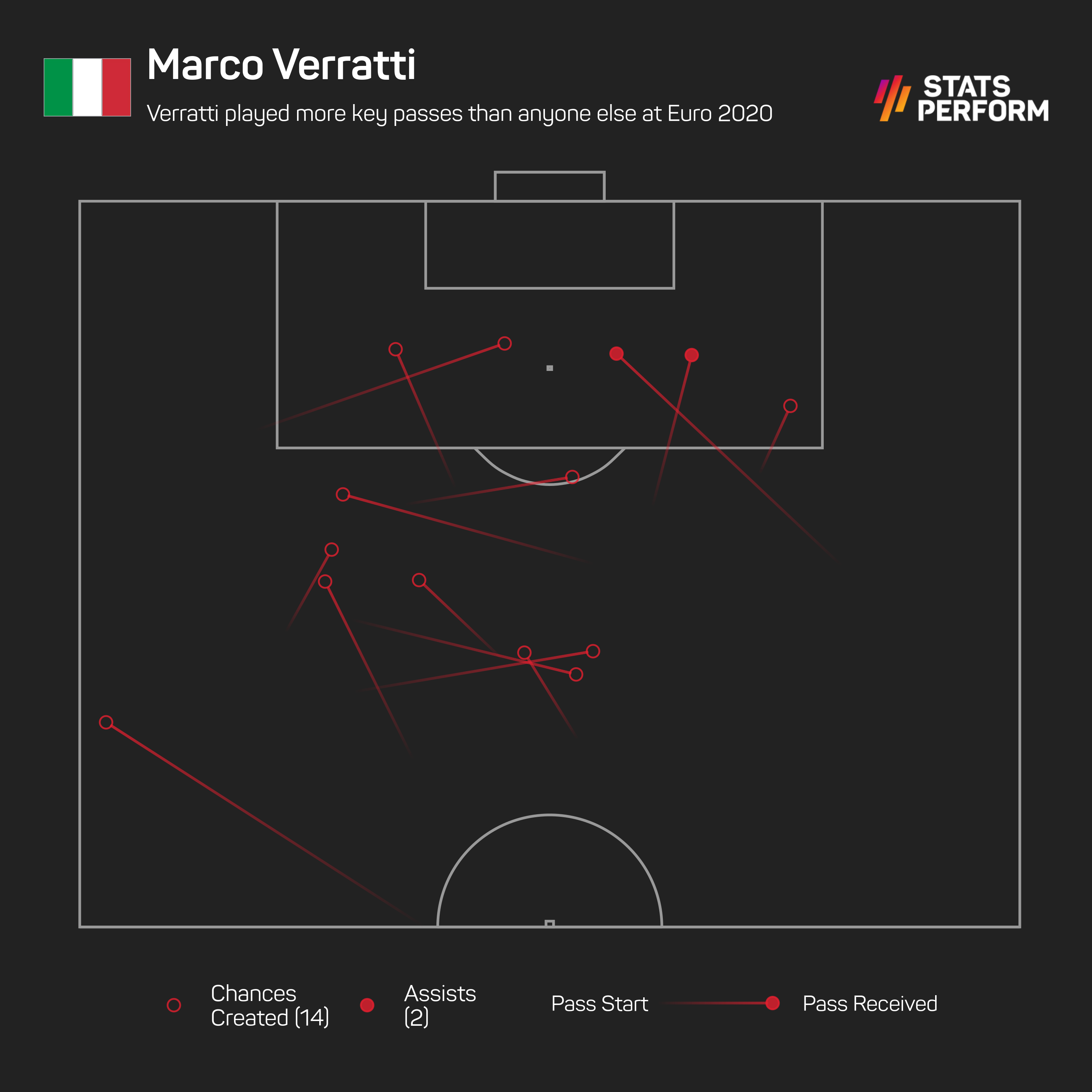 No Azzurri player, even his metronomic midfield ally Jorginho, made (89) or completed (84) more passes. His assist for Nicolo Barella's opening goal was one of three chances he created and 73 passes in the opposition half.

Only full-back Giovanni Di Lorenzo contested more than Verratti's 16 duels, with his 104 touches another team-high.

The semi-final against Spain pitted Italy's midfield against one arguably even more gifted than their own, as Sergio Busquets, Pedri and Koke combined with false nine Dani Olmo to help restrict Mancini's men to an unusually low 30 per cent of the ball as the 120 minutes finished 1-1.

Again used for 74 minutes, Verratti's passing numbers were way down to 30 attempted and 23 completed, but his impressive combativeness makes him a midfielder for all situations.

Over the course of the tournament, his 18 tackles (nine successful) were more than any other player in his position, an average of four per 90 minutes. He also recovered possession 37 times. Jorginho registered 25 on that metric and his competition-best 25 interceptions further underscored Mancini having the perfect blend with and without the ball in his engine room.

Italy were never as likely to spend chunks of the game chasing the ball against a more reactive England, but they were caught cold by Gareth Southgate's surprise switch to a 3-4-3 – wing-backs Kieran Trippier and Luke Shaw combining for a second-minute opener that sent Wembley into raptures.

The opening half-hour threatened to run away from Mancini's men as England continued their tournament-long habit of starting with authority, but Italy gradually turned the tide and Verratti was key. 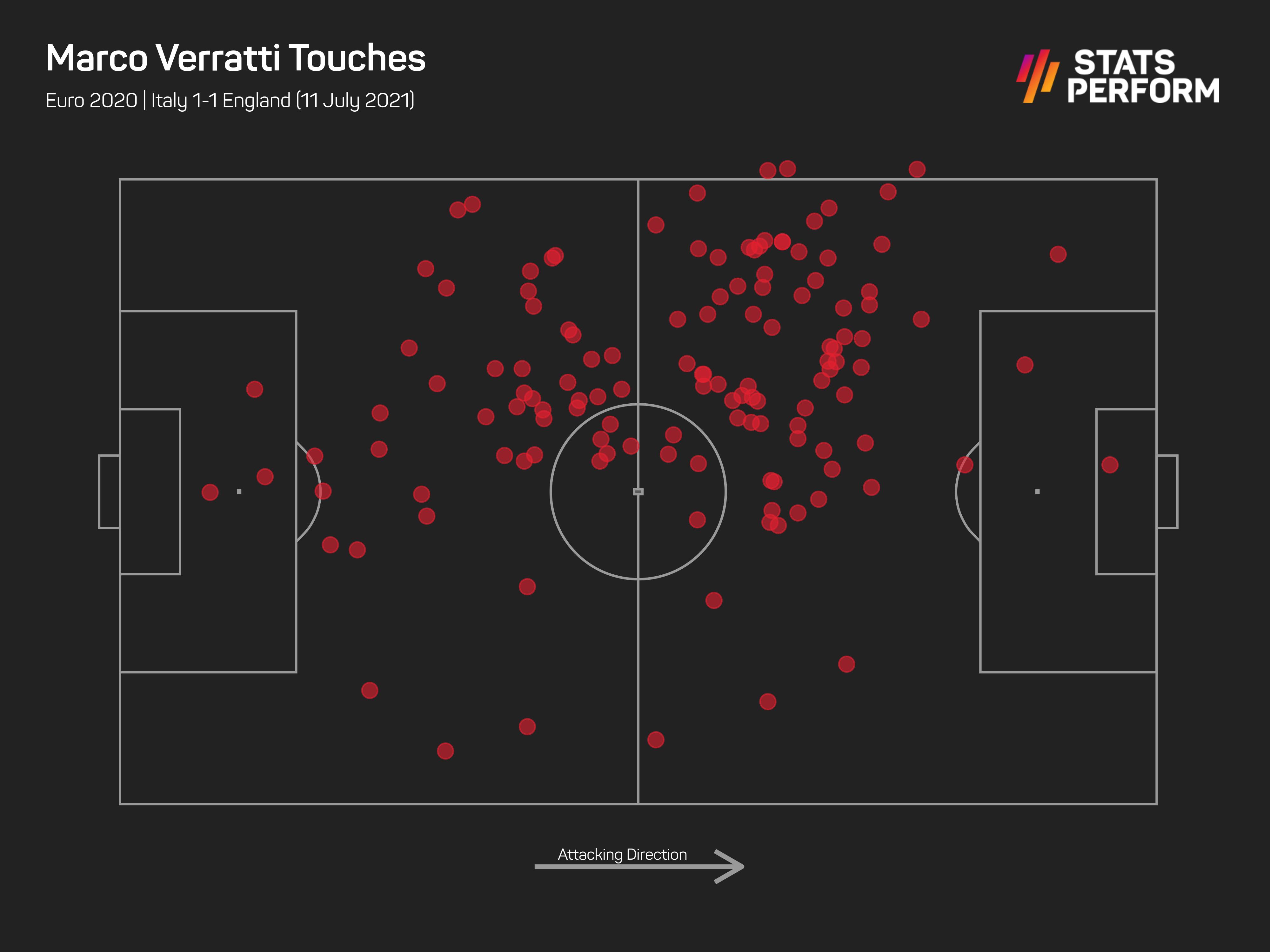 That came after Verratti tenaciously got in front of Mason Mount to have a diving header saved, but the key feature of his performance were all the impeccably judged, picked and weighted passes.

He threaded 118 overall, completing an astounding 111, dragging England to distraction in his 96 minutes on the field.

Verratti departed in extra-time looking crestfallen, left to only hope his team-mates could complete a triumph that would have been impossible without him. Whenever he was on the field, things rarely felt so much in the balance.