After a day of goalfests and beautiful chaos at Euro 2020, Stats Perform looks at the key Opta stats.

June 28, 2021 – it has been a 'remember where you were' kind of day at the European Championship, with the round of 16 treating us to two absolute classics.

After seeing Spain emerge as winners over Croatia in an eight-goal match, many of us were probably settling down to watch France expecting a rather duller affair given their approach in the group stage.

What we got was the complete opposite, as Switzerland pulled off what will probably be the biggest shock of the tournament regardless of what happens from this point on.

With 14 goals between the two matches, only June 23, 2021 has seen more scored on a single day in Euros history but that came from a pool of four matches.

Furthermore, this was the first day at a European Championship or World Cup with two games featuring at least six goals each since June 15, 1982.

At the end of a truly remarkable day, Stats Perform looks at the key Opta stats from two engrossing matches.

67 – For the first time in 67 years (World Cup 1954), Switzerland have reached the quarter final of a major tournament. Upset. #FRASUI #SUI #EURO2020 pic.twitter.com/B2ShFxmkwZ

Given how wasteful Spain have been at times in Euro 2020, it's a remarkable achievement that they have managed to become the first side in European Championship history to score five goals in successive games.

But rarely did they have things their own way, shooting themselves in the foot with Pedri scoring the longest-range own goal in Euros history at 49 yards as Unai Simon saw his pass bobble over his foot.

Incredibly, it was the ninth own goal at Euro 2020, as many as in the previous 15 editions of the tournament combined.

Pablo Sarabia equalised before the break, with Cesar Azpilicueta – now Spain's oldest-ever Euros scorer (31 years, 304 days) – and Ferran Torres putting them 3-1 up in the second period. They were cruising.

Or, they were until the last five minutes of normal time when Mislav Orsic and Mario Pasalic both scored, incredibly forcing extra-time.

But back came La Roja. Alvaro Morata silenced his army of critics with his fifth career goal at the Euros, levelling the Spanish record held by Fernando Torres, and then Mikel Oyarzabal made sure of the victory.

5 - Spain are the first side in European Championship history to score 5+ goals in consecutive matches. Scenes. #EURO2020 pic.twitter.com/SAjCjQ9z0o

While it was always going to be tricky for France to go all the way given their tough group and the fact they were on the trickier (in theory) side of the draw, anyone who says they predicted Les Bleus being eliminated by Switzerland is a liar.

Yet here we are, and the Swiss are into the quarter-finals. And, to be fair, they might have booked their place earlier had Hugo Lloris not become the first French goalkeeper to save a penalty at a major tournament (excluding shoot-outs) since 2004 when Switzerland were already 1-0 up.

Within four minutes and three seconds of that save, France were 2-1 up – Karim Benzema making himself only the second Frenchman to score two or more goals in successive games at the Euros since Michel Platini's back-to-back hat-tricks at Euro 84.

Paul Pogba then got what should have been the clincher 15 minutes from time with a scorching finish, his fourth in five goals for France to come from outside the box.

But Haris Seferovic got his second of the game to take his tally to three goals in two games after only previously managing one in 13 major tournament appearances, and Mario Gavranovic's dramatic effort secured extra time.

It was in the extra 30 minutes when Mbappe was particularly wasteful, missing one especially good chance, and what followed in the shoot-out ultimately made sense in that context.

After the first nine kicks were converted, Mbappe – who has had more shots (14) without scoring than any other player at Euro 2020 – saw his effort saved by Yann Sommer. 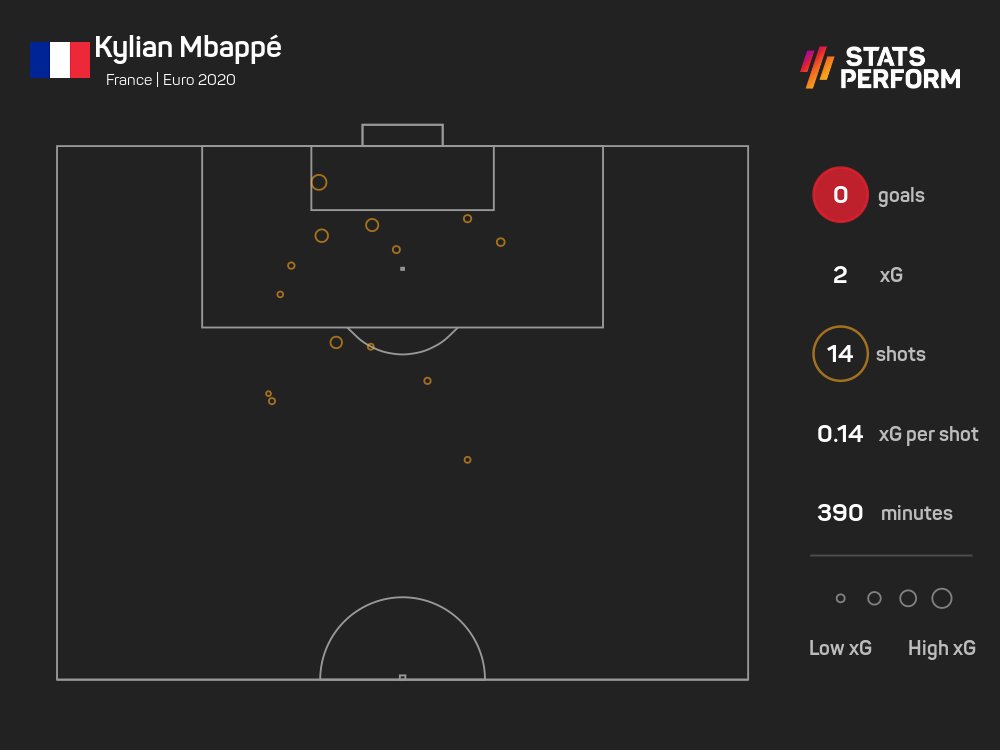 Tokyo Olympics Recap: Popovich insists France loss should not come as a surprise

USA suffered a rare defeat in the men's basketball at the Olympic Games against France, while Anastasija Zolotic created history.

France fell to a heavy defeat at the hands of Mexico and now do not have much time to react before they face South Africa.

The United States suffered disappointment at the 2019 World Cup when they lost to France, who are also their opening Olympic opponents.