Against Germany on Tuesday, England will be hoping to put a poor Euros knockout record behind them.

England will have to overcome a wretched record in European Championship knockout matches if they are to get past their old nemesis Germany in the round of 16 on Tuesday.

The Three Lions go into the match having never won a knockout game in 90 minutes at the Euros, with four of their previous six attempts ending level and two leading to defeats.

Four of those past instances went to penalty shootouts and England only progressed from one of them, against Spain in Euro 96.

That victory came at Wembley, so perhaps the locale of Tuesday's clash will at least provide England with an edge – after all, they are unbeaten in their 14 Euros and World Cup matches (excluding penalty shootouts) at the 'Home of Football'. 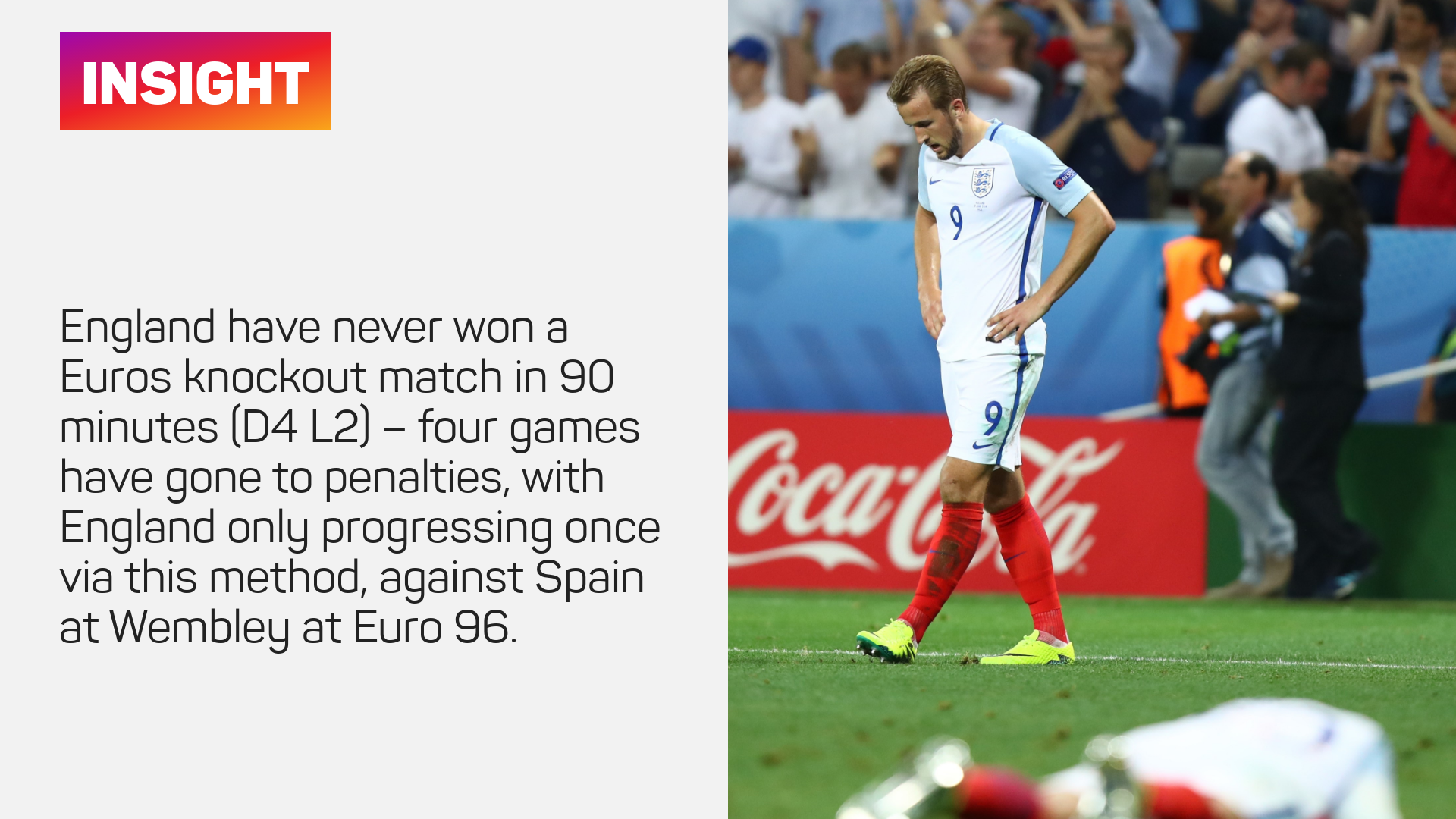 While former Germany international Stefan Effenberg suggested that all the pressure will be on England because of the home crowd, Three Lions manager Gareth Southgate senses an opportunity.

The rivalry may be weighted more towards England in terms of the significance attached to these fixtures, but Southgate was keen to impress on his players that history is within their grasp.

"It's a great opportunity for this team to make some history and give people memories of England-Germany fixtures for the future that are a little different to some of the ones they've been flooded with over the last few days, which mean absolutely nothing to them because they weren't born," Southgate said.

"The game is probably worthy of more than the second-round stage. We're playing against a very good side.

"They won't fear coming to Wembley. We'll have to play at our very best. We've got to be tactically, physically and psychologically well-prepared."

With Harry Kane faltering in the group stage, looking a shadow of the sharpshooter who is usually so reliable for Tottenham and England, the goalscoring burden has fallen on Sterling. Despite a disappointing second half to 2020-21, the Manchester City winger has scored both of the Three Lions' Euro 2020 goals, taking him to 14 in his past 19 appearances for his country after just two in his first 45 caps. 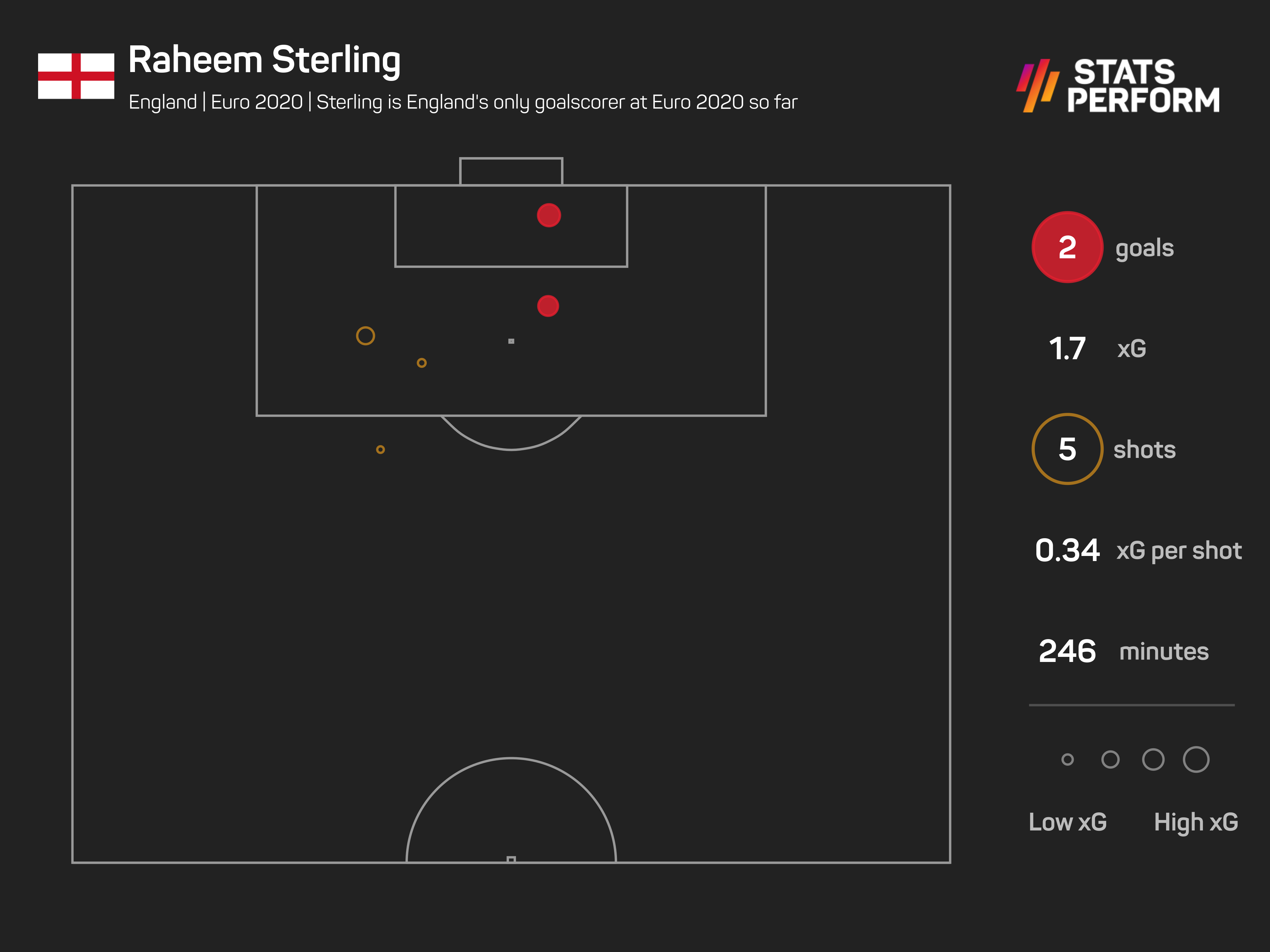 From an individual perspective, Havertz's first season at Chelsea was not especially impressive. Having been roundly criticised in England during 2020-21, he will surely be eager to catch the eye here, and given his start to the tournament, many would back him to do just that. He's already got two goals, though the fact his non-penalty xG of 2.7 is the highest of anyone in the tournament suggests he's been a threat beyond those two efforts. For example, the total xG of sequences he has been involved in (3.8) is bettered by only Pedri (4.6 - before Spain played Croatia) and Memphis Depay (4.4). Write him off at your peril. 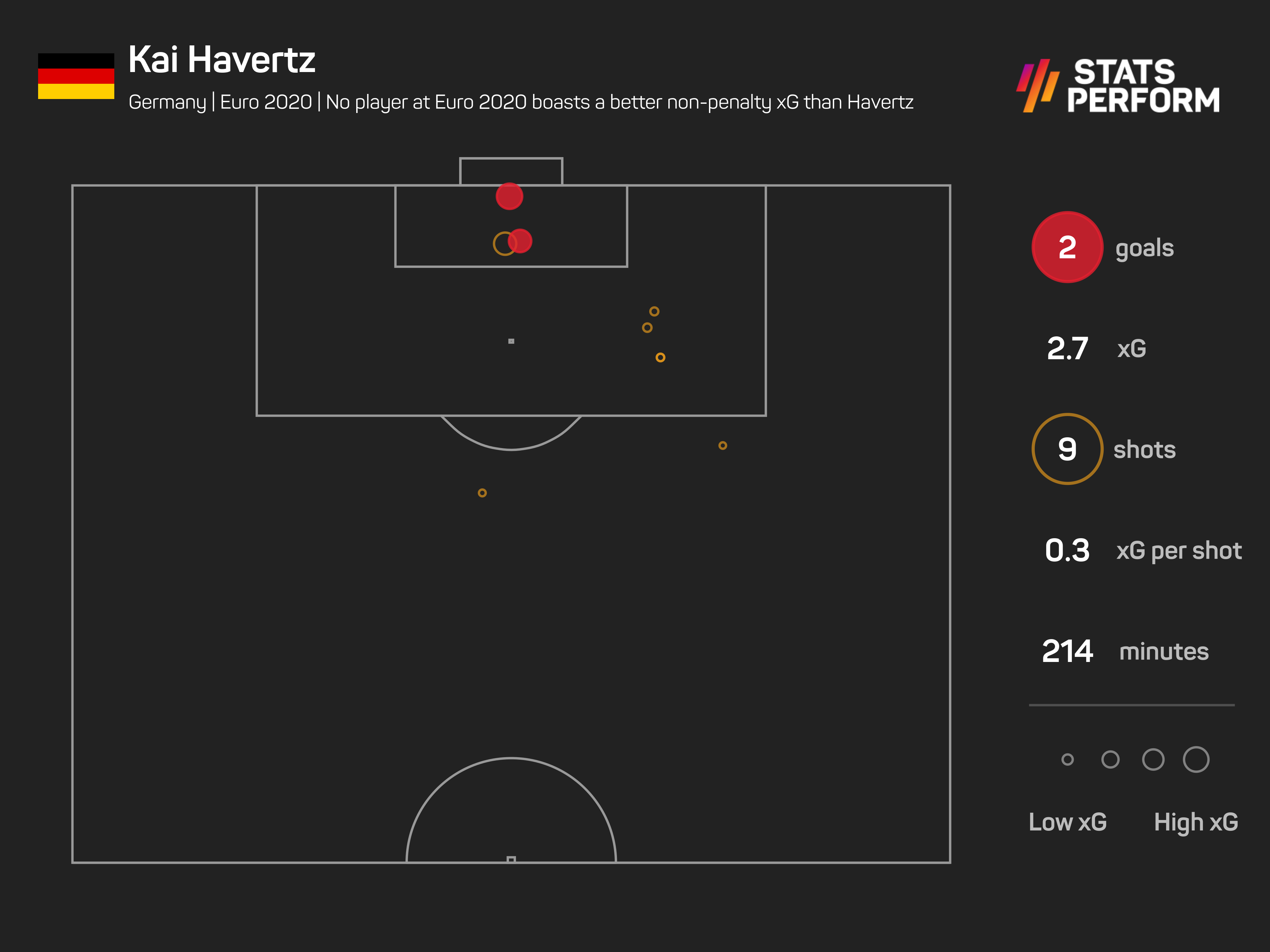 - Germany's Ilkay Gundogan has scored twice at Wembley, for Borussia Dortmund in the 2013 Champions League final and for Manchester City in the Premier League. He could become just the second player to score at the ground for a club side and the German national team after Per Mertesacker.

- This will be the 13th meeting between England and Germany at Wembley. England won four of the first five such games (L1), including the 1966 World Cup final, but are winless in their previous seven against the Germans at the national stadium (D2 L5).

- This will be England's 300th international match at Wembley, with this the 77th match they will have played at the new site since it reopened in 2007. The Three Lions have won 187 times at this venue (D73 L39).

- Germany have conceded at least once in each of their previous eight matches at major tournaments (Euros and World Cup), since a 3-0 win against Slovakia at this stage of Euro 2016. Only once have had they had a longer run without a major tournament clean sheet, which was in their first nine World Cup matches between 1934 and 1954.