Plenty hurried to ask "what are England made of?" when Jordan Pickford finally conceded against Denmark. They received an emphatic answer.

John Stones extended his arm and held up a palm. Stop. Breathe.

It was time for Jordan Pickford to calm down. No time for bedlam.

The Everton goalkeeper headed into Wednesday's Euro 2020 semi-final encounter with Denmark in superb form, yet to be beaten in the tournament.

In the 27th minute at Wembley, Pickford moved on to 720 minutes without conceding a goal for England, breaking a record set by the great Gordon Banks between May and July 1966. We all know how that tournament ended and how none have ended like it in the 55 years and four semi-final defeats since.

But by the time Pickford pouched that piece of history, events had already started to turn.

After Kalvin Phillips erred to allow a shot from Pierre-Emile Hojbjerg, Pickford frantically sought to launch an attack - his distribution often such a plus for Gareth Southgate. He hurled the ball straight at Mikkel Damsgaard, who understandably seemed a little surprised by that.

A passage of gasping, pulse-quickening mistakes ended with Martin Braithwaite having a shot deflected behind for a corner. England emerged unscathed but robbed entirely of their early poise.

Damsgaard, Braithwaite and Kasper Dolberg were finding pockets of space all across the turf, with England's plan for snuffing out Denmark's lightning breaks apparently amounting to little more than Kyle Walker being terrifyingly fast. He's terrifyingly brilliant, too, but still...

Too much was passing England's defensive midfield block by. Declan Rice and Kalvin Phillips did not make a tackle between them in the first half. Tottenham's Hojbjerg, patrolling central areas expertly alongside Thomas Delaney, snapped into five all by himself.

Rice was caught napping by Dolberg, who was brought down by Mason Mount. That's what friends are for.

A relatively unthreatening free-kick became a threatening one as Luke Shaw wrapped his arms around Andreas Christensen defending the initial set-piece. From 30 yards, Damsgaard creamed a delightful strike beyond Pickford, who will think he should have done better.

In calmer times, perhaps he would. Then there was further skittishness, prompting centre-back Stones to intervene.

Sterling started the game tearing mercilessly after the right-hand side of the Danish defence. He should have done better after cutting inside Christensen and scuffing a shot too close to Kasper Schmeichel.

A scuff would have done the job in the 38th minute, when Sterling met Saka's low cross sweetly and Schmeichel saved improbably. But the seed was planted – more ice-cool work in behind from Saka, more scrambled brains as Sterling made a nuisance of himself, with the result an own goal for skipper Simon Kjaer.

The contest continued in that vein throughout the second half, when whichever side found themselves on the backfoot appeared to be operating in a state of anguish. The occasion simultaneously fuelled its protagonists and threatened to blow up in their faces. Pickford saved sharply from Dolberg, unaware of the offside flag

Into the final 20 minutes of normal time and the highest stakes elite football was operating under park rules: next goal wins. Southgate's team are gloriously unburdened by England's tragicomic history. But no footballer with a pulse would be unburdened by such a present.

Jack Grealish was on but Kasper Hjulmand used his bench more boldly, sending on Yussuf Poulsen and Christian Norgaard for the impressive Damsgaard and Dolberg. Or was it more desperately, as Rice and Phillips (95.2 and 90.2 per cent pass completion) emerged from choppy waters to gradually exert control and wrestle the opponents deeper.

Six minutes of stoppage time: would you even dare? Sterling still asked questions of defenders with no remaining appetite for such trivia. Fouls piled up, bodies were on the line. This was how England tended to conclude big knockout games but Denmark reached the sanctuary of full-time. 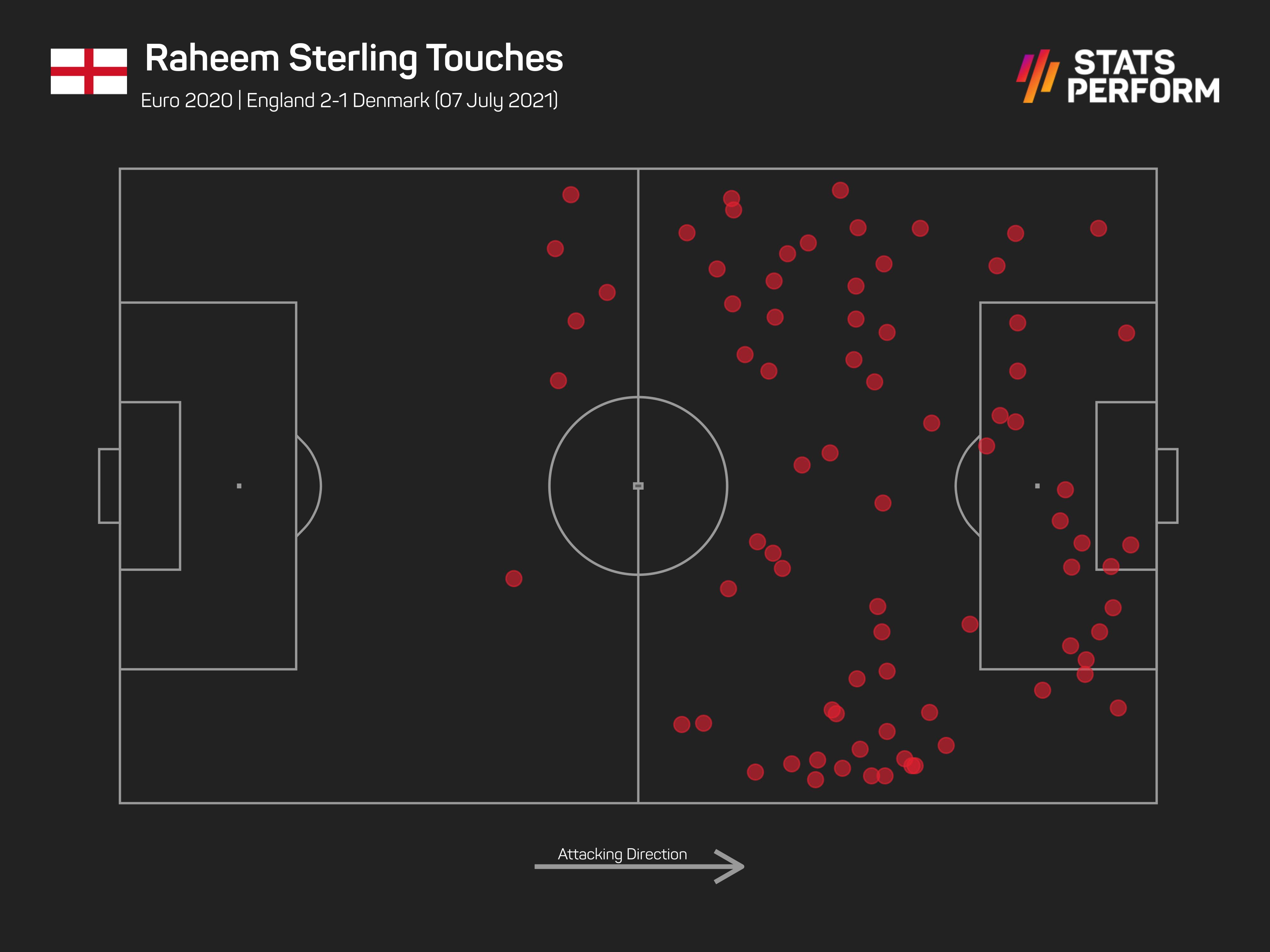 Still Southgate kept his talent-stacked bench sheathed. Harry Kane fired towards Schmeichel on the angle. No one was there for the rebound. Fresh legs might have been.

And so, they arrived. Phil Foden instantly schemed with bad intentions, briefly lifting kindred-spirit Grealish in the process.

Sterling still schemed with bad intentions and found himself lying at the feet of Jannik Vestergaard, which felt mocking because the hulking centre-back looked like the biggest, tiredest man in the whole world.

The Manchester City forward was on the floor due to some combination of contact from Joakim Maehle and Mathias Jensen. Danny Makkelie ruled it was enough for a penalty.

Saved? No problem. Harry Kane never needs to calm down with a loose ball and a goal in front of him.