Kevin De Bruyne inspired Belgium to a 2-1 win against Denmark, as Thursday's Euro 2020 match featured a show of love for Christian Eriksen.

Belgium planned to kick the ball out of play after 10 minutes against Denmark to pay their own mark of respect to Christian Eriksen. The world's top-ranked football nation were perhaps not anticipating, however, that they would be chasing the game – and indeed Danish shadows – at that early stage in the match.

In the end the referee, Bjorn Kuipers, seemingly had to remind the Belgium players to bring the contest to a temporary halt, sparking emotional scenes as supporters and players - Eriksen's current and former club-mates Romelu Lukaku, Jan Vertonghen and Toby Alderweireld among them – applauded in unison.

It was that type of occasion and that type of start for Denmark as they produced a fitting tribute to stricken team-mate Eriksen, who was likely to have been watching on from his hospital bed barely 400 yards away, where he continues to recover from a cardiac arrest.

Football was put into perspective the moment Eriksen went to ground in the Danes' opening Group B defeat to Finland – he was "gone", in the words of team doctor Morten Boesen – but thankfully updates in the five days since the incident have been largely positive.

Whether we will see the Inter playmaker on a field again remains to be seen; that he is able to smile and laugh once more with his colleagues is a huge victory in its own right. A bigger victory, indeed, than Denmark were on course for against Belgium until the Kevin De Bruyne show ensued. 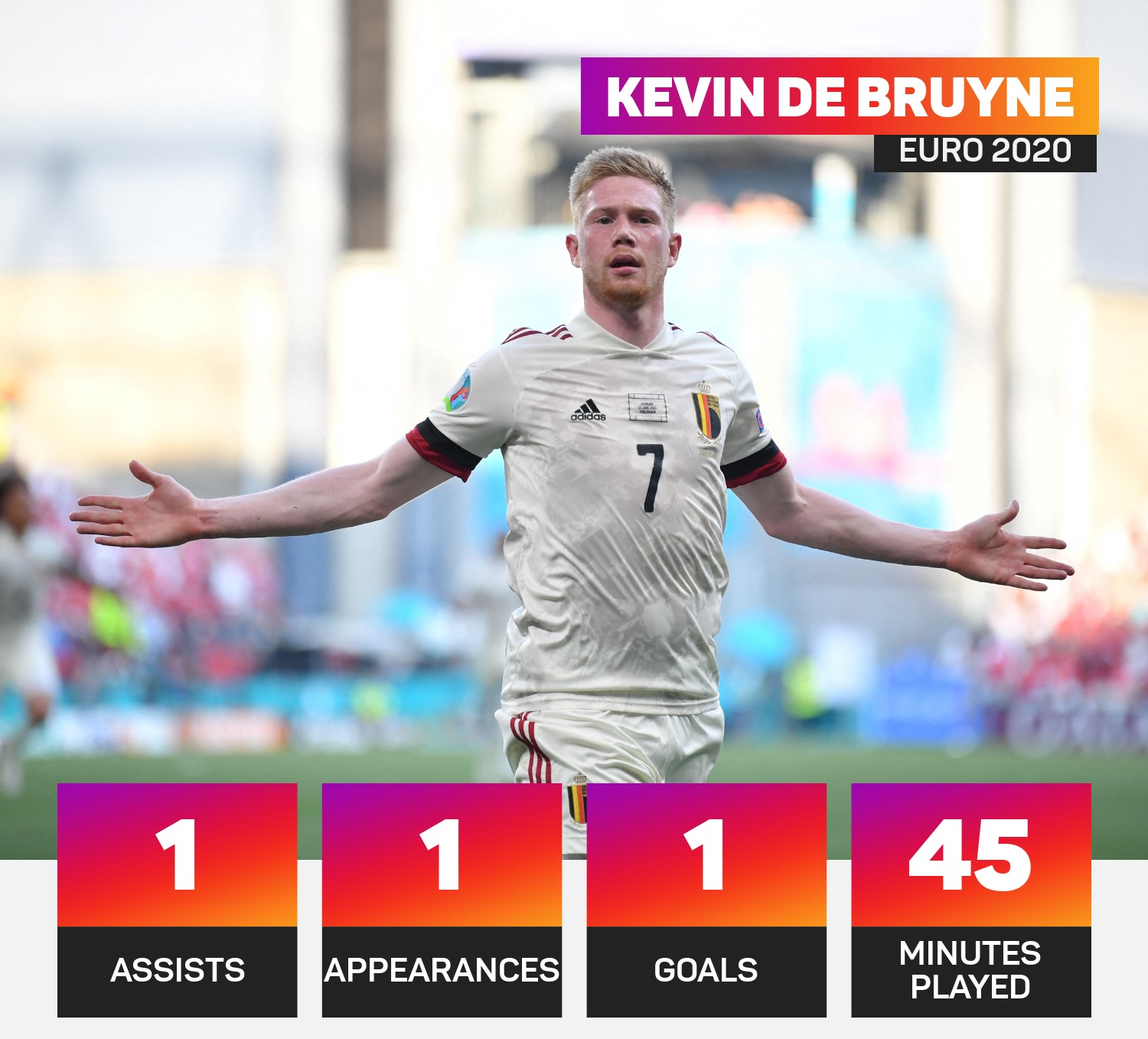 Long before the Manchester City playmaker's half-time arrival, just 99 seconds into the game at a raucous Parken Stadium, Yussuf Poulsen finished expertly into the bottom-left corner for the second-quickest goal in European Championship history.

Poulsen profited from a Jason Denayer error, the Lyon defender looking rusty in the early stages after returning to the side in place of Dedryck Boyata at the back following a rare day off in the 3-0 win over Russia.

Roberto Martinez's Belgian charges lived up to their tag as the world's number one side in their previous match against Russia, and the professionalism of this performance – as bad as they were in the first half – will arguably heighten expectations that they can go all the way when at full strength.

Belgium mustered just one attempt in the first half – a flicked effort from Dries Mertens on his 100th cap.

The last time they managed only one effort in the opening 45 minutes was in a 2-0 loss to Spain in September 2016, Martinez's first at the helm, which preceded a run of just three defeats in their next 56 matches.

Denmark could not quite add their name to that rare list of nations to have conquered the Red Devils over the last five years, with the visitors' quality eventually shining through. Make that De Bruyne's quality.

Still recovering from a facial injury sustained in Manchester City's Champions League loss to Chelsea last month, the playmaker was introduced for the start of the second half and made an instant impact.

Against the run of play, Lukaku turned his marker and pulled the ball back for De Bruyne to tee up the unmarked Thorgan Hazard. The finish from six yards was simple, the build-up to it anything but.

That assist made De Bruyne the only European player to set up a goal in each of the last four major international tournaments and he added his own name to the scoresheet 16 minutes later.

Another flowing team move culminated in De Bruyne driving a low shot past Kasper Schmeichel. A broken nose and a broken eye socket for De Bruyne; broken dreams for Denmark as their tournament hopes are now perhaps as good as over.

This game was never solely about the result, though – one that ensures safe passage through to the knockout stages for Belgium with a game, against Finland, to spare.

The defining moment was not Denayer's error, De Bruyne's match-changing introduction or Martin Braithwaite skimming the crossbar at the end, but rather the moment when all within the stadium united to pay respect to the popular Eriksen.

"All of Denmark is with you, Christian," a banner in one of the stands read. And boy did Denmark's players show that as they gave Belgium's hugely talented squad a run for their money.

Belgium will likely need to replace Kevin De Bruyne's creativity against Italy in the Euro 2020 quarterrfinals.

Belgium may well be without Kevin De Bruyne and Eden Hazard for their next match, but both could be fit for a semi-final.

Eden Hazard hobbled off in Belgium's win over Portugal en route to the quarter-finals, with Roberto Martinez unsure of the severity.

An injury late in the first half against Portugal saw Belgium's Kevin De Bruyne substituted early in the second.

Kevin De Bruyne and Bruno Fernandes are the two most prolific creators in the Premier League but are experiencing a contrasting Euro 2020.

Martinez insists Belgium have no special plan to stop Ronaldo